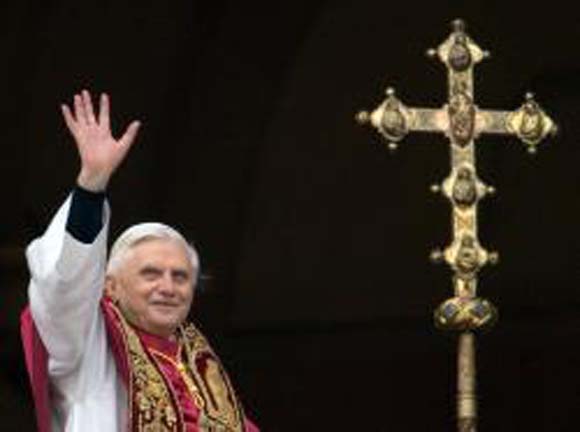 The sudden abdication of Pope Benedict XVI yesterday, to come into effect on 28 February at 7pm GMT, was greeted with sadness by many Catholics around the world. Shock and sadness were predominant themes on the social media. Although the Pope has not died, thank God, our response to the news – and that of the media – quite naturally thinks of the Holy Father’s departure in such terms. The Church is, as it were, ‘losing’ a great and holy leader. The Pope’s bold announcement was another great sign of his deeply humble and loving service in the vineyard of the Lord. And that is why we will miss him.

But I have to admit my principal reaction to the news was one of strangely joyful surprise. I suppose this is because it was immediately apparent that Pope Benedict had taken this decision on his own, in full freedom and after prolonged prayer; and therefore he himself considers this the best, and perhaps only, course for the Church to take in light of his increasing frailty. In other words, this was a great act of humility and love for Christ’s Church – and that is a reason to rejoice. Besides, we can be happy that the Pope can find peace in his prayerful retirement, which is of course what he had longed for before his election to the See of Peter.
This move, unprecedented in the modern era, demonstrates yet again how Pope Benedict is radically committed to the common good and the advancement of the Gospel in our world. He knows clearly – at least much better than us – what challenges and burdens the governance of the Church imposes on its earthly leader. Our Pope has never forgotten that his position is one of service to the Lord, and hence of service to the whole Church: he is the ‘Servant of the Servants of God’. Like John the Baptiser, Benedict knows when Love calls us to say, ‘I must decrease.’ (Jn 3:30)
Inevitably, the feverish harvesting of opinions, the inchoate assessments of ‘legacy’, the bewildering speculation about succession, once begun will not cease over the coming months. Even the jokes have piled in already: the Pope has set the bar very high in giving up something for Lent; and so on. Many of the jokes are in poor taste, alas, just as the media commentary is often negative.

So, what should be our Catholic response to this? I think we should recognise that the papal resignation is not a simple act and cannot be interpreted in any simple fashion. Our sadness is lined with joy; our reflection on the past mixed with hopeful anticipation for the future. In praying for the Pope and the Church at this time, let us also remember the many who do not call themselves Catholic and Christian, including those who (for whatever reason) do not see the Church as a bearer of ‘good news’.

Godzdogz would like to wish Pope Benedict a happy and peaceful retirement, with our prayers for him and those who must now meet to elect his successor.