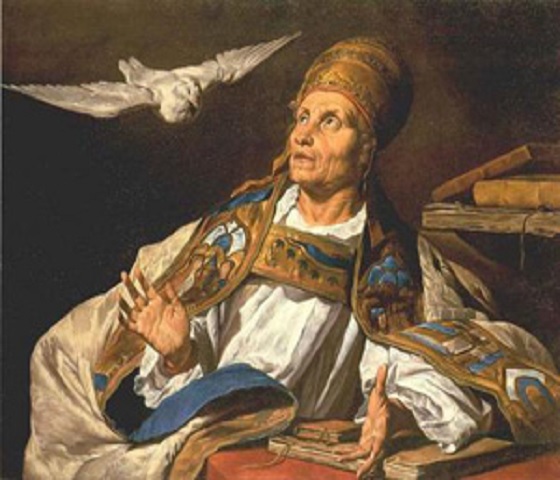 ‘For the love of God’: it’s an utterance of exasperation at an unwelcome or intimidating task and said with sincerity characterises the proper disposition for all Christians to all their labours, both welcome and unwelcome. As far as unwelcome tasks go, being Pope when all your deepest desire – save for doing God’s will – is to be a monk living a quiet, cloistered life of prayer, has to pretty high up there, and, therefore I think ‘for the love of God’ would have been a very appropriate papal motto for Pope St Gregory the Great.

Born in 540 AD into a wealthy and powerful Roman family, Gregory received an excellent education and seemed destined for worldly greatness when he was appointed Prefect of the city in 572 AD. This administrative position would equip him with excellent skills for his subsequent life, but ultimately did not satisfy, as is evidenced by his decision to resign his position and turn his home into a monastery.

As a monk he dedicated himself to the task of recollection in God, prayer, and peaceful immersion in study, and in so doing, once more he was equipping himself for the task which God would ultimately call him to carry out. This time he found that his chosen life satisfied in every respect, yet God did not will that he remained in it. Thus it was that Pope Pelagius appointed him a deacon and sent him to Constantinople, where he acquired further skills that he would draw upon during his papacy.

Eventually, he was recalled to Rome, and in 590AD – a time of great tumult and suffering in the city – he was declared pope by popular acclamation. At first, he tried to resist, and even to flee, but eventually he recognised the will of God in the decision of the clergy, senate, and people: he relinquished and accepted the role, doing it for the love of God and His people.
He showed a great love for the poor in his papacy and also a real missionary spirit. It was Gregory who sent St Augustine, yet another monk reluctantly leaving his cell under protest for love of the God and His Church, to Canterbury to evangelise England.
He was also a great preaching pope – despite the weakness of his voice which often necessitated that a deacon read his homilies on his behalf – and his writings are a great treasure of the Church. In some ways he was a very Dominican pope, resourcing the years he had spent in contemplation as a monk and now sharing the fruits of that reflection with his people.
Today’s second reading in the Office of Readings is taken from a sermon of his on the book of Ezekiel. It contains wise words for today’s preacher and also comfort for us when our own weakness makes us cower, motivating us to preach once more ‘for the love of God’:
When I try to concentrate and gather all my intellectual resources for preaching, how can I do justice to the sacred ministry of the word? I am often compelled by the nature of my position to associate with men of the world and sometimes I relax the discipline of my speech. If I preserved the rigorously inflexible mode of utterance that my conscience dictates, I know that the weaker sort of men would recoil from me and that I could never attract them to the goal I desire for them. So I must frequently listen patiently to their aimless chatter. Because I am weak myself I am drawn gradually into idle talk and I find myself saying the kind of thing that I didn’t even care to listen to before. I enjoy lying back where I once was loath to stumble.
Who am I — what kind of watchman am I? I do not stand on the pinnacle of achievement; I languish rather in the depths of my weakness. And yet the creator and redeemer of mankind can give me, unworthy though I be, the grace to see life whole and power to speak effectively of it. It is for love of him that I do not spare myself in preaching him.
Categories:
Saints