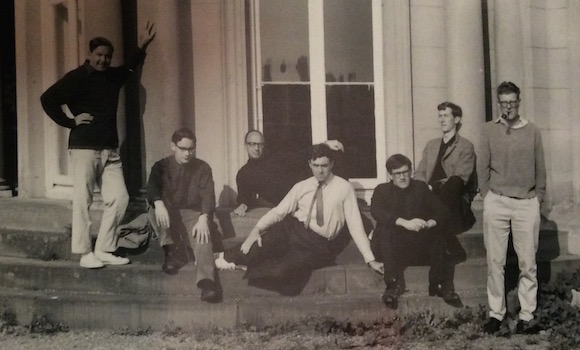 As I settle into the comfy chair in the Student Master’s bedroom, with the buses rumbling outside along St Giles, it occurs to me that for the next half hour the roles will be reversed: I will be the one asking him about how he’s getting on in the Dominican life. He is the first to be interviewed in our new Godzdogz series on the life and work of the brethren today.

David Christopher Sanders grew up in a North London parish run by Olivetan Benedictine monks. ‘I think my vocation, without a doubt, came from the liturgy, a very strong sense of the presence of God … and a call’. Religious life seemed normal; the Olivetans were ‘happy, well-adjusted religious and people were attracted – a bit like here at Blackfriars – to the liveliness, the preaching, the good liturgy of the parish’. Fr David has always been interested in Scripture, experiencing ‘the pull of the Gospel’.

But the young David didn’t want to enter religious life too early. Studying English at King’s College London was ‘alright’, though he got ‘quite involved’ in the Catholic Chaplaincy and made some lifelong friends. He then went to Tanganyika for three years, teaching in a school run by German Benedictine missionaries (‘a very efficient mission, almost overwhelmed the local population’), and was there during the Zanzibar revolution in 1964 which led to the formation of the united Tanzania.

The early-1960s were important for the Church, too. ‘It was a very exciting time to be a young Catholic, because of all the new movements which would come to a climax at Vatican 2.’ David had been present at Pius XII’s final public audience at Castelgandolfo and keenly followed the news of Roncalli’s election as John XXIII, a man who had close Olivetan connections. 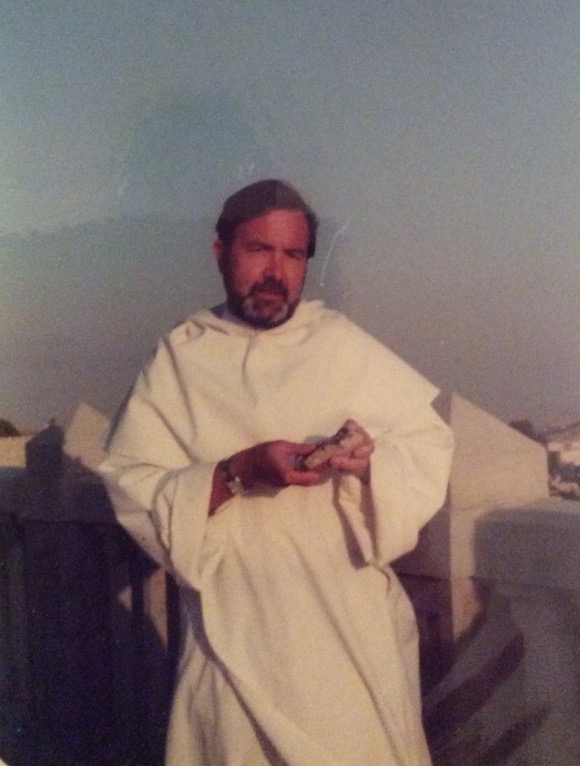 Why did David join the Dominicans, then, instead of the Benedictines? He was drawn to a more itinerant vocation, he explains, and ‘a taste for adventure’ runs in his family (his brother was then serving as an army officer in the Far East). The Dominicans seemed to be ‘perhaps the only Order I could survive in, flexible…’ Then he adds: ‘and I could get a good education.’ So it was also the intellectual side, knowing about Dominicans such as Herbert McCabe and Anthony Ross, and attending Laurence Bright’s extracurricular theology lectures for Catholics at King’s. He felt the Dominicans were the only ones who could stand up intellectually to the agnostic academics in the university.

It was exactly fifty years ago, as Vatican 2 was drawing to a close, that David joined the Order, in a noviciate of twelve, of whom three others are still in the Order (Timothy Radcliffe, Simon Tugwell, and Tom Kearns). It was a period of crisis in religious life, and I ask about the six novice masters they had in the space of one year. ‘There were only three! Timothy says six, but I think he might have been influenced by the beer that was made in the novitiate at Woodchester.’ As if to put the strength of the drink beyond doubt, he adds: ‘I hadn’t worn glasses until I drank that beer!’ But he concedes even three novice masters is a bit much. ‘It really was an extraordinary crisis. Everything was falling apart in many ways.’

Philosophical and theological studies followed at Hawkesyard then Oxford. Brother David matriculated at Trinity College for a year’s diploma in Scripture, then spent a year in Paris, to improve his French, complete his licentiate and enjoy a different experience. The great priory of St Jacques then housed a hundred friars, including Chenu, Congar and Pohier. That was in 1973, a year still affected by the ’68 revolution, but we don’t dwell on the details of how he ran into a supermarket and bought a small chair to put in his rather austere cell and to avoid the tear gas from a riot outside…

On 2 October 1971, at Blackfriars Oxford, Fr David was ordained to the priesthood by Bishop Christopher Butler, the former Abbot of Downside who had a major influence at Vatican 2. Timothy Radcliffe was ordained in the same Mass.

The ordination Mass (left, with Herbert McCabe OP, and reception (right) on 2 October 1971 at Blackfriars, Oxford

What are the highlights of Fr David’s priestly ministry? He enjoyed teaching at the United Theological College of the West Indies in Jamaica for nine years and the pastoral challenges of working on urban and rural parishes. The life of a missionary has never quite left him; he still manages St Martin’s Mission, making appeals in parishes throughout England to raise funds for our Caribbean mission. Teaching at Cambridge was also a ‘blessing’: he ran the Bible Study group at the Fisher House chaplaincy for fifteen years and gave Scripture ‘supervisions’ for several colleges. It was striking how students gave very different responses to Scripture, and thus ‘how much one learned oneself’. 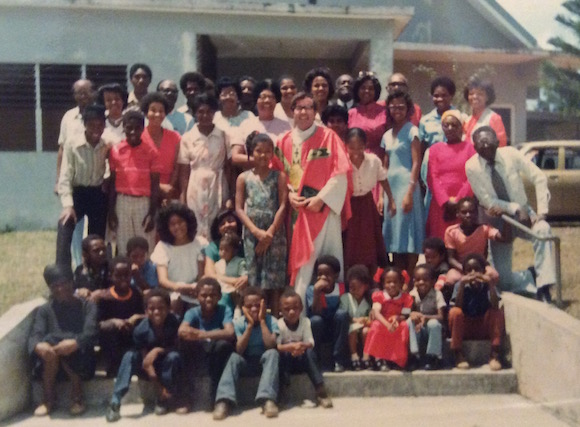 What about his time as an editor? He produced a monthly issue of Priests and People for thirteen years, and had close links with The Tablet. ‘You had to be very open to what what was going on, and try to respond to what were the felt needs in the Church and society at the time.’ He was also glad to have good writers, sensitive to theology and history, and drawing on a wide culture: Eamon Duffy, Nicholas Lash, Luke Timothy Johnson, among others. From such articles came two popular books: Faith of Our Fathers by Duffy and Living the Gospel by Johnson. For Fr David, they exemplify how ‘to preach the Gospel in different situations without feeling inhibited’.

How has Fr David navigated the Dominican diversity of apostolates? ‘I’ve been very lucky. I think I thrive on a combination of the academic and the pastoral.’ He acknowledges he has been ‘blessed’ in Jamaica and England to do both simultanesouly, ‘and therefore happy’.

So we turn to community life, which underpins all the external activity. ‘If you’ve got a good community, it’s a very satisfying way of life.’ At Cambridge, Fr David was prior of the ‘mixed community’ of friars and lay students, ‘where everyone shared in the liturgy and the cooking…that was a great experience. We had endless dramas…but we survived!’ Others call it the ‘mixed-up community’, and Fr David admits it was an ‘unusual’ setup, though a sense of nostalgia remains. 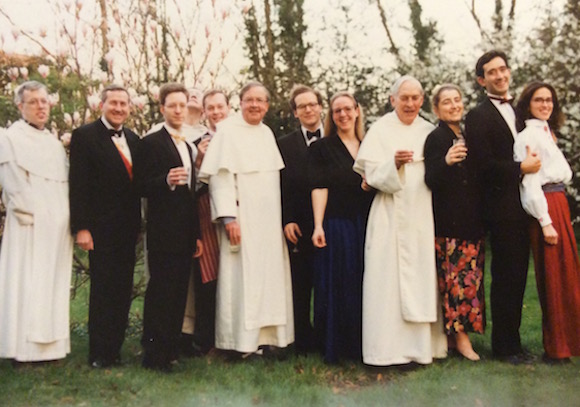 There have always been young people and students around Fr David, and he gets on well with young and old alike. ‘It’s only the difficult people you don’t like – because they’re difficult!’ He pauses for a moment, and concludes that co-operative is the operative word. I suppose that’s his way of highlighting our vow of obedience.

There has been no lack of work either: Fr David was bursar in Cambridge, then prior for six years, and afterwards in Oxford ‘endlessly student master’ (1999-2004, then 2011-present). Fr David has formed more than one generation of Dominican friars, including over half the present Oxford community. He knows that a good community can lighten the burdens of one’s own work. Community meetings are very important, albeit a ‘great penance’, since good government matters: ‘things go wrong if the Constitutions are neglected’. Then, to avoid accusations of legalism, he quickly adds, ‘not in a wooden way’.

We return to liturgy and prayer, the driving force of his vocation. Private prayer is ‘absolutely essential’, and the Holy Spirit has answered many prayers. But prayer also manifests itself in preaching; the Dominican life encourages ‘a combination of preaching and prayer as a personal ascesis’. And preaching is not only about reaching others but also allowing the Gospel to speak to oneself: ‘The challenge of preaching is a way of growing’, that is, ‘to make sense of the Gospel in the world we live in’.

What, finally, does our oldest member of the community think about the future? The would-be Soixante-Huitard avers that historical context is important: religious life ‘reflects very much what’s in the air in society’. He is ‘extremely hopeful’ about the future and is pleased with his Dominican students: ‘they combine a seriousness about study with a desire to evangelise. It does offer a source of hope when you see a community which is flourishing, because it’s inspired by the Gospel.’ 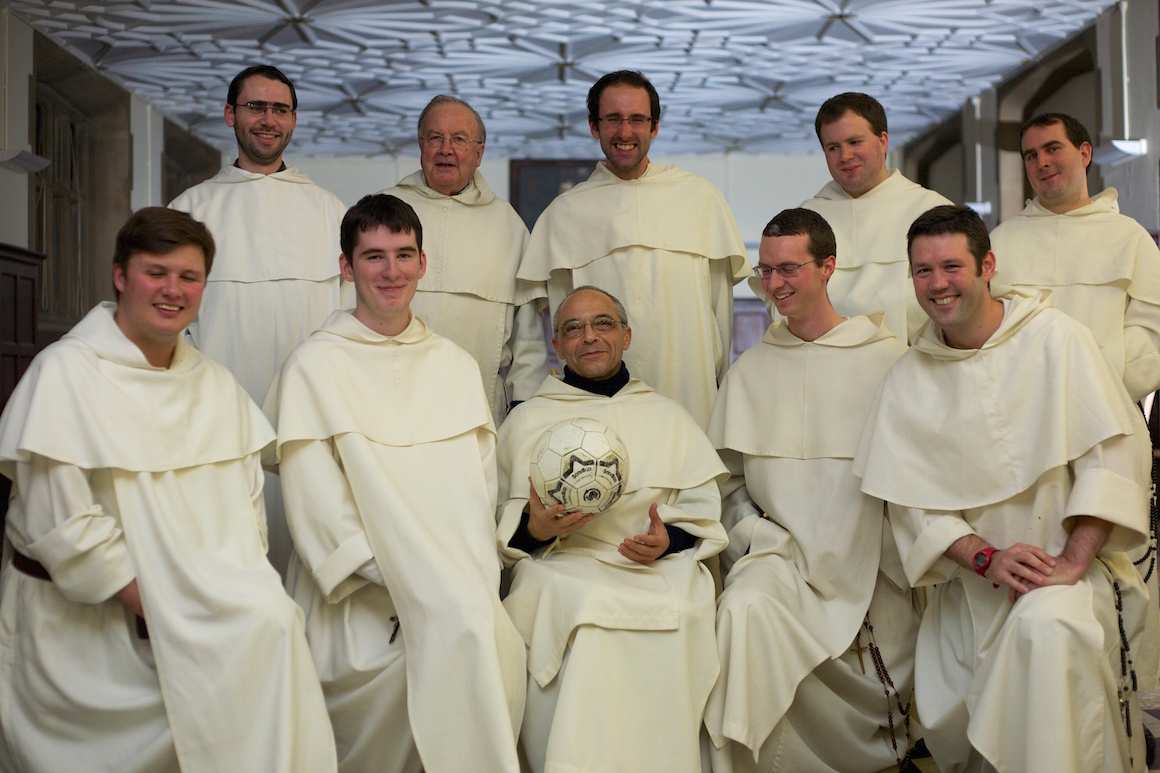 Fr David (back row, second from left) with his Dominican students and the Master of the Order in December 2013

Top image: David Sanders (far left) with some of his fellow novices in 1965.