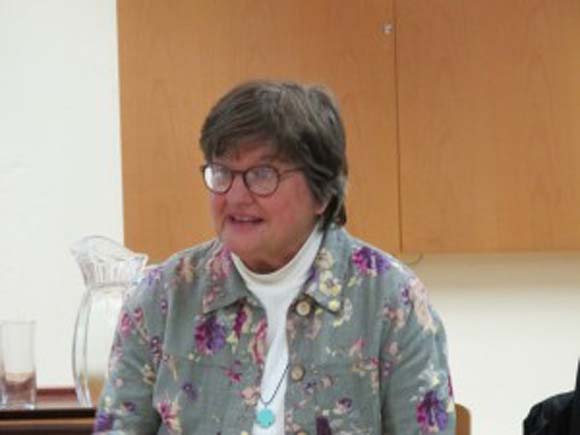 Sr Helen Prejean & the Call to Work for Justice

Sr Helen Prejean, well known as the religious sister featured in the film ‘Dead Man Walking’, recently came to Blackfriars, Oxford. The visit was organised by the Province’s Promoter of Justice and Peace, Andrew Brookes OP, contributor to Godzdogz. Sr Helen joined us for Mass and supper, and then spent an evening discussing with us the Christian call to work for justice, drawing on her own experience.
Having entered religious life before Vatican II and after being challenged to undertake concrete ministry with poor people she then responded to a request to write a letter to a prisoner on Death Row. This led to her becoming his spiritual adviser and this in turn, much to her surprise, to her accompanying him to his execution and witnessing it, so as to be ‘the face of Christ’ to him as he faced death. This also brought her into contact with the families of the victims who she recognised needed support as well. All this changed her life. She has since been spiritual advisor to a number of prisoners on death row, set up organisations to support the victims of violence and worked for the abolition of the death penalty. She was written books on this work and lectures extensively, sustaining her work with prayer and contemplation. 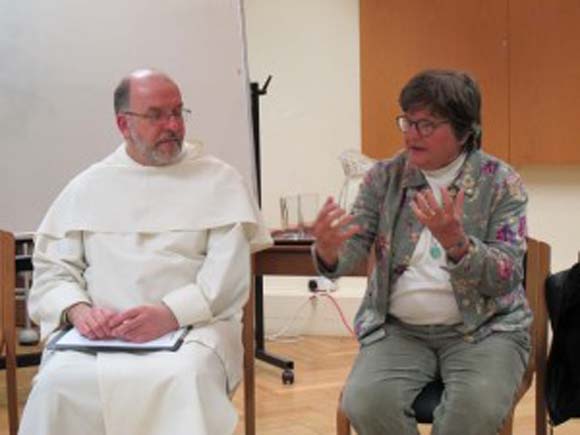 Sr Helen shared this journey and work with us in some detail, relating it to a rich grasp of the Gospel of Life, especially as articulated by Bl John Paul II, and wider Gospel and Church teaching. She discussed with realism issues relating to the penal system. And we heard some behind-the-scenes stories in the making of the film! She nudged us towards sharing our own experience of responding to God, and even of struggling to respond, and of our own work with prisoners and others in need, and the tensions all this throws up. Sr Helen encouraged us to take seriously a commitment to social justice as intrinsic to the command of Jesus to love our neighbour, to preach the truth, and to be instruments of God for the building of the Kingdom of God.
It was notable that Sr Helen admitted to her own initial prejudices against undertaking such work, to her misunderstandings, to making mistakes and having lots of fears at various points, but amid these what was also striking was faithfulness to both God, neighbour and the Gospel. This also showed in the integrity and courage to work with both perpetrators and victims of violence. She continually stressed the centrality of grace to initiate and sustain such work. One other thing that was particularly striking to me was the way quite extraordinary work had grown out of small and simple steps to demonstrate practical love – such as the writing of a letter. We are all capable of such small acts: who knows what a difference they can make, and where they may take us …