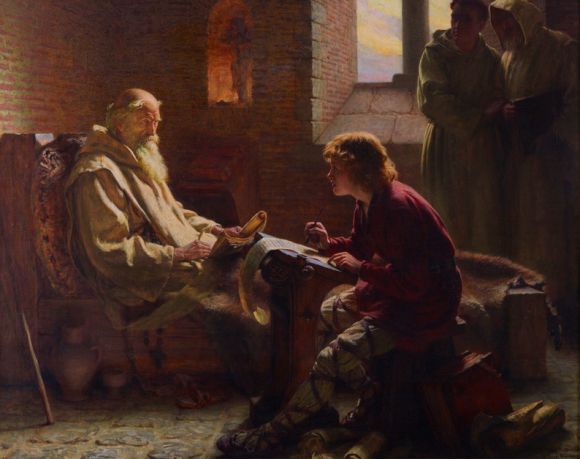 Godzdogz
Home  /  Godzdogz  /  St Bede and the Eagerness of Study

St Bede and the Eagerness of Study

By Br Pablo Rodríguez Jordá, O.P. | One of the most learned men of his time, the Venerable Bede can be for us not only a model of scholarship, but of simplicity and holiness: in his life, the prayerfulness of study and the intellectual eagerness of faith cannot be separated. Mind and heart were united in a single pursuit of Truth, which was only possible because the Word of God was at the centre of all his endeavours.

‘How did it ever happen that, when the dregs of the world had collected in western Europe, when Goth and Frank and Norman and Lombard had mingled with the rot of old Rome to form a patchwork of hybrid races, all of them notable for ferocity, hatred, stupidity, craftiness, lust, and brutality—how did it happen that, from all this, there should come Gregorian chant, monasteries and cathedrals, the poems of Prudentius, the commentaries and histories of Bede, the Moralia of Gregory the Great, St. Augustine’s City of God, and his Trinity, the writings of St. Anselm, St. Bernard’s sermons on the Canticles, the poetry of Caedmon and Cynewulf and Langland and Dante, St. Thomas’ Summa, and the Oxoniense of Duns Scotus?’

The popular History Channel series ‘Vikings’ has reawakened in recent years an interest in the so-called ‘Dark Ages’. Much as I like its attention to Norse literature and its detailed depiction of the customs of the Scandinavian peoples, I have always thought it fails to do justice to the atmosphere in which medieval Christians lived, who are portrayed as obscurantist, fanatical and hypocritical. Admittedly, most stories paint with a broad brush: any Manichean division into goodies and baddies necessarily distorts historical reality, be it from the perspective of the Vikings or the Christians. But the truth is that the advent of Christianity to Northern Europe effectively incorporated its peoples into a civilization stretching along both shores of the Mediterranean, and brought with it a wealth of learning that did not destroy the cultures it touched.

Indeed, the large body of texts in Anglo-Saxon and Old Norse that has been handed down to us was only preserved by the pen of monks who, in the spirit of St Paul’s injunction to cherish whatever is true, honourable, excellent or praiseworthy, toiled to record the tales of their ancestors’ feats for posterity. Only thanks to their eagerness to pass on the traditions of the past is it possible for present-day medievalists, who often display no less zeal in their scorn for medieval monks and their Christianity, to read about Beowulf the Geat or Ragnar Lothbrok. ‘Eagerness’ is the right term here, for that is the original meaning of the Latin word studium. The monk’s was a life of ‘study’, we might say, structured around the contemplation of the Word of God, which permeated his day through meditation, the chants of the divine office, and readings at mealtimes. And it was amidst a culture of manuscripts, scribes and libraries that the ancient pagan myths were rescued from oblivion.

St Bede lived in such a world, though he died only a few decades before the first Viking raids ravaged the very land of his birth, and in this sense he can be seen as the culmination and the end of a chapter in medieval history. As one of the most learned men of his time, he exemplifies that union of sanctity and scholarship that only the medieval monasteries could achieve. Though he is perhaps best known as the author of the Ecclesiastical History of the English People, one of the most important historical sources for the period, he was above all eager for the Word of God, to which he devoted numerous commentaries. Yet the sacred and the profane were not in tension for him. When in the early 19th century the so-called conflict between science and religion reached public dimensions, St John Henry Newman boldly defended in his writings the claim that the ‘philosophical temper’ was first spread by the Gospel. Even if some of Christianity’s critics may argue that it has sometimes thwarted experimental research, no one will deny that it has always given great impulse to philological science: the criticism and commentary of texts, their translation and preservation, in sum, the ‘love of literature’. Yet Newman goes on to argue that some central virtues required for scientific enquiry, the earnest desire for the truth, patience, caution, imagination or humility, found their home first in Christianity.

In St Bede we see how ‘study’ can never be the dispassionate accumulation of facts or information. Instead, it must lead to the pursuit of Truth, a search after something (or better, someone) that involves the whole person and that demands the use of all our talents and abilities. Only then can knowledge become wisdom. One of Christianity’s most distinctive doctrines is that the world does not arise out of some cosmic cataclysm or primeval war between gods, like in the pagan mythologies; rather, it is created through the Word of God, as the work an artisan carefully crafts following the designs of his mind. And so it is no surprise that by placing the Word at their centre, the medieval monasteries brought order and rhythm to the very heart of Europe, with their daily choreography of work, prayer and study, and restored stability and peace to the land. Nor is it a surprise that the academic discipline that first flourished in monastic and cathedral schools was Logic (the study of the Logos), laying the foundations for the rise of the universities. The subsequent explosion of learning that spread across Europe can only be understood as the fruit of a profound belief in the intelligibility and orderliness of the created world.

It was not fanaticism or obscurantism that drove the life of a saint like Bede the Venerable, but rather an eagerness for the Truth, for the pursuit of that wisdom which is ‘more precious than jewels, and nothing you desire can compare with her … those who hold her fast are called happy’ (Prov 3:15-18). He remains a beacon in the midst of the Dark Ages, and a model of wisdom and sanctity for our time. May he pray for us.