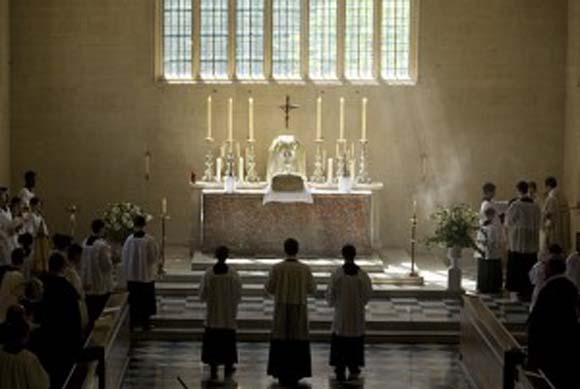 The Life of Virtue – Devotion

By Lawrence Lew O.P.
675
We might hear that someone is devoted to a cause, or their children, or even to their pet animal. What this seems to mean is a readiness to do everything one possibly can for the sake of the other. There is a sense, then, of total dedication to a given end which even amounts to a kind of religious fervour. In fact, this is very close to what St Thomas Aquinas means when he speaks of the virtue of devotion.

The word comes from the Latin devovere, which means ‘to vow’. As a vow is an act of religion, so St Thomas says that one who is devoted is one who “surrenders himself readily to the service of God” who is our final end and our greatest good. Hence, devotion is essentially an act of religion, and it is an act because it is something that we deliberately choose to do. In St Thomas’ language, it is “an act of the will”. Hence devotion, properly speaking, is a virtue ultimately directed towards God, and other attitudes which are not so directed are called ‘devotion’ only by analogy.

Nevertheless, we can see from our non-religious use of the word that devotion is fuelled by love. A mother is devoted to her family, an activist to his cause, and a child to her pet rabbit because they love that other. Moreover love itself is confirmed by the act of devotion. So, St Thomas says, “charity both causes devotion (inasmuch as love makes one ready to serve one’s friend) and feeds on devotion. Even so all friendship is safeguarded and increased by the practice and consideration of friendly deeds”.

Therefore, devotional acts are an expression of one’s love for God, and these acts in turn confirm and strengthen that love. It is thus that we speak of devotion to the Blessed Sacrament, or the Virgin of Guadalupe, or even to the pope. As St Thomas explains, “devotion to God’s holy ones, dead or living, does not terminate in them, but passes on to God, in so far as we honour God in His servants”.

However, such love which gives rise to devotion, requires us to think first about God and recognise his goodness. So, St Thomas says we need to contemplate the Scriptures and meditate on God’s wonderful deeds, for “this consideration wakens love”. In recent years there has been a decline in devotion and fervour in parts of the Church. This is not surprising as faith in God fades and people no longer think of Him or love Him enough to be moved to acts of devotion. No wonder too that people’s ‘devotion’ is increasingly diverted from God and the spiritual joy that is the true effect of devotion to other more worldly but transient joys.

How then are we to cultivate the virtue of devotion? Firstly by contemplating God’s goodness and love, through reading the Scriptures and encountering Christ, the living Word of God. Then, as we grow in love for him so we shall express that love in acts of devotion that result in real joy. As St John says: “He who does not love does not know God; for God is love. In this the love of God was made manifest among us, that God sent his only Son into the world, so that we might live through him. In this is love, not that we loved God but that he loved us and sent his Son to be the expiation for our sins” (1 John 4:8-10).

Fr Lawrence Lew is Prior and Parish Priest at Our Lady of the Rosary and St Dominic, London; he is the Editor of the Province's magazine 'The Dominicans' and Co-ordinator of the Province's Internet Apostolate. He is also the Dominican Order's Promoter General for the Holy Rosary, and author of ‘Mysteries Made Visible’ (CTS 2021).
lawrence.lew@english.op.org