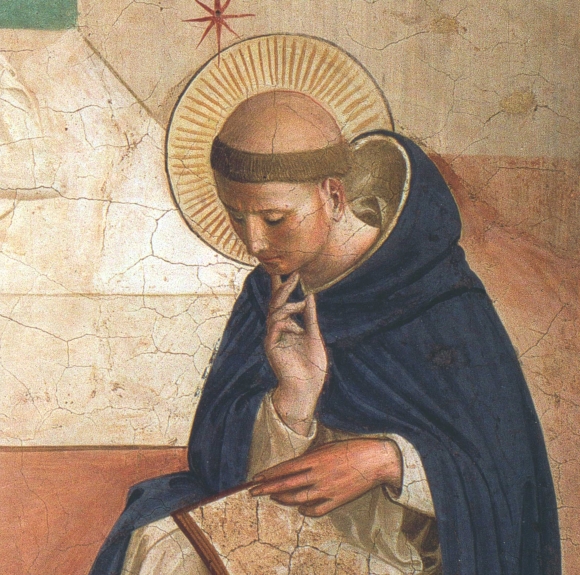 The Preacher of Grace

By Br Pablo Rodríguez Jordá | It is easy to forget that St Dominic’s life is a story of failure, of dead ends and frustrated plans, which nevertheless manifested God’s designs and was made fruitful by this saint’s profound life of prayer, a true example of holiness in hard times.

We have always been in the midst of a crisis. Any historian knows that. There are no golden ages when one looks back over the long record of war, disease, decadence and destruction that makes up the course of the centuries. No society in written history seems to have been free from a certain sense that doom hung upon it, that as soon as order and peace are achieved, the threats to it multiply, that any ‘heaven on earth’ is but an passing illusion.

St Dominic of Guzman cannot have been unaware of this. He was born, after all, in No Man’s Land: Castile, which as it name indicates (‘land of castles’) was a militarised frontier territory and had for decades withstood the advance of the Almohad incursions. When Dominic was still a youth, the Castilian armies suffered one of their worst defeats at the battle of Alarcos and the country was ravaged by famine. Danger lay not only beyond the frontier, for in the neighbouring regions of Southern France religious controversies were beginning to tear Christendom apart.

Yet Dominic did not seem to despair of the world. An eminently practical man, he seized whatever opportunities came his way, with a profound conviction that God is the Lord of History and all things are ordered by Him to a good end. Every person that met Dominic seems to have been struck by his life of prayer – though there was nothing exceptional about it, other than his ability to spend a lot of time at it, listening, ready to respond. This must have laid the foundation of that unwavering trust in Providence that he later displayed in all his major decisions.

In this sense, it is easy to forget that Dominic’s life is a story of failure, a long series of dead ends and frustrated plans. While still a young man studying for the priesthood, he made a name for himself after selling all his books to assist the needy during a time of famine. To many, this would have seemed a rash way of putting an end to all prospect of a scholarly career, for books were precious resources at the time, and owning them an even rarer privilege. Yet Dominic acted without hesitation. Once ordained a priest, his vocation as a Canon Regular was also a fiasco. As such, he could have expected a cloistered life at the cathedral of Osma, dedicated to prayer and ministering for the spiritual needs for the locals. But this was not to be.

Commissioned by the king of Castile on an uncertain journey, he set out to Denmark to arrange the marriage of the king’s son with the daughter of a Scandinavian nobleman, an adventure which, by the way, also went awry: two years later, when the embassy returned to Denmark to escort the bride to Castile, they discovered she had changed her mind and become a nun! Travelling around Europe made a deep impression on Dominic, who soon experienced a desire to be sent to its many peoples that had not yet heard the Gospel. This led him first to Rome, to plead with the Pope himself to send him on a mission to the pagan tribes of the North. His desire was refused.

Instead, he was sent to the Cathars in Southern France, a Christian preaching among Christians, seeking to reunite those who had separated themselves from the Catholic Church. It is probably in the famous scene at the inn where we most clearly see Dominic’s zeal for souls set ablaze. He stayed up all night arguing with the Cathar innkeeper, who, so the story has it, had returned to the Catholic faith by the time the sun was rising. Dominic’s vocation was not to be found in perilous expeditions into foreign lands, but rather, in the simplicity of a one-to-one conversation, in a quiet room, by the fireplace. Nothing like this scene reveals his trust in the power of words – in the power of the Word of God.

Yet even this enterprise ended in failure. Social and political unrest in Southern France escalated rapidly, leading to military action against the Cathars. Dominic and his followers had to withdraw and disperse across several nations, only to begin their preaching mission anew. This newfound combination of evangelical poverty and itinerant preaching soon proved a successful way of life, and the first bands of Friars Preachers spread throughout Europe.

The last few years of Dominic’s life were no different. When the Order of Preachers, now institutionally established and present in several countries, held its first General Chapter, summoning friars from all corners of Europe, Dominic begged not to be elected Master General of the Order. The Chapter refused his wish. He gave himself over to the task with no less zeal than had characterised his life, and nearly a year later, he died. He was laid to rest in the chapel at Bologna ‘under the feet of the brethren’, who, now serving the Church in all kinds of mission, were too busy to make a cult of their founder.

Were all of Dominic’s ‘failures’ able to achieve anything? Doubtlessly they did, but probably not in the way he himself had expected. In each of his failures, it was God’s grace that triumphed, and so, Dominic became the preacher of grace, of God’s power revealed through human limitations. For there is no victory in this world that does not belong to God. For us Christians, the task is to carry on praying, pleading with God, losing most battles in the hope of winning the war. The man we celebrate today was, above all, a person of deep prayer, and this is the only adequate response to times of crisis, to failure and disappointment; the ground where the seed of grace is sown, an insignificant seed that grows, puts forth large branches, and becomes the greatest of all the trees of the field.

Holy Father Dominic, pray for us!