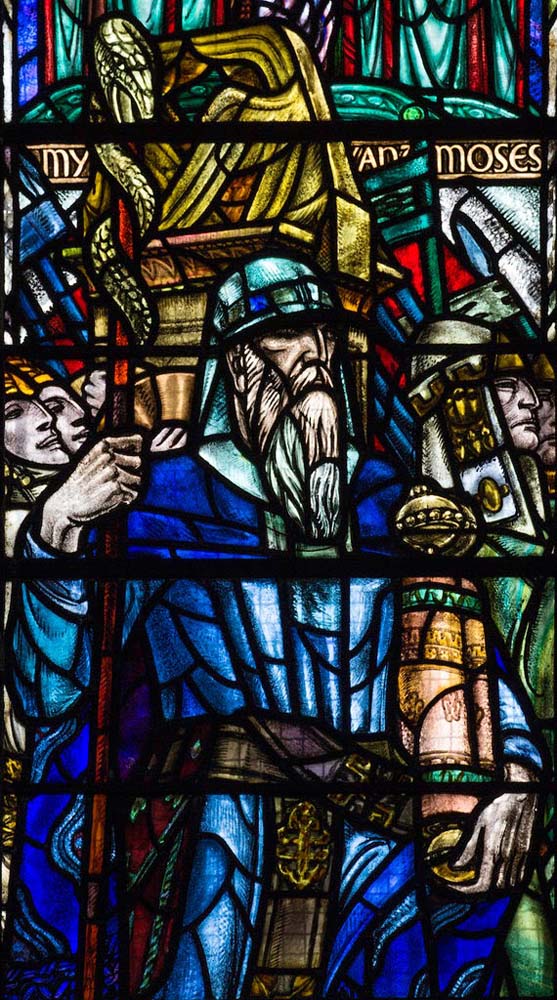 Third Sunday of Lent: The Woman of Samaria

By Nicholas Crowe O.P.
10
Readings: Exodus 17: 3-7; Psalm 94; Romans 5: 1-2.5-8; John 4: 5 – 42
Our Gospel reading today is from chapter 4 of John’s Gospel: Jesus’ encounter with the Woman of Samaria, also known as the Woman at the Well. Now St. John goes out of his way to remind us that the fact that Jesus should have such a conversation with a Samaritan woman is in itself surprising, as St. John himself says, ‘Jews had no dealings with Samaritans’ (John 4:9). This historical enmity between Jews and Samaritans had deep roots that reached far back into Israel’s history to the moment when the twelve tribes, briefly united under Saul, David, and Solomon, once again divided as Rehoboam, son of Solomon, took the throne. We read in chapter 12 of the first book of Kings that the ten northern tribes had sought assurances after Solomon’s death that his son would reduce the heavy load of hard labour inflicted on the people through Solomon’s various building projects. Rehoboam refused, and so the ten northern tribes rebelled against the house of David and instead made Jeroboam their King, leaving only the tribes of Judah and Benjamin loyal to David’s line.

Yet this new northern Kingdom of Israel faced a problem: the temple in Jerusalem still dominated the religious life of the northern tribes, yet Jerusalem was the capital city of the house of David and the Kingdom of Judah. Jeroboam, the new King of the northern tribes, feared that if he allowed his people to continue to worship in the south then slowly his authority would be undermined, so he fashioned two golden calves and set them up at Dan and Bethel in the north, declaring to the people:
‘You have gone up to Jerusalem long enough. Behold your gods, O Israel, who brought you up out of the land of Egypt’ (1 Kings 12: 28).
This sin is referred to again and again in the Old Testament as the sin or way of Jeroboam: it is the sin of idolatry, of worshiping what is not God, and throughout the Old Testament idolatry is presented as a kind of adultery. The northern Kingdom is an adulterous nation that has turned away from the Law and instead worshiped the work of its own hands.
Now the Samaritans are the descendants of these ten northern tribes of Israel that rebelled against the House of David. The name ‘Samaritan’ refers to the capital city of this northern Kingdom, Samaria, built by King Omri in the early ninth century before Christ. Samaria was eventually destroyed by the Assyrians around the year 722 BC, and its inhabitants were deported. The Assyrians replaced these deported Israelites with similarly displaced peoples from all over their empire. Now the Jews of the southern Kingdom would later allege that those members of the ten northern tribes that were not deported when Samaria fell collaborated with their conquerors, and rather than maintaining their racial purity, intermarried with the various peoples and nations that the Assyrians resettled among them. As a consequence, hardliners among the Judeans of the south believed that the people of the northern Kingdom had forfeited the right to be called ‘Israelite’. Instead they referred to them as ‘Samaritans’ after the principal city that Omri had built. For the hardliners among the Jews, then, Samaritan history began with political and religious infidelity, and culminated in dubious sexual morals.
There is a sense in our Gospel reading, then, that the personal history of the Woman of Samaria mirrors the history of her people. In the course of her conversation with Jesus, we discover that this Samaritan woman has had five husbands, yet the man she lives with now is not her husband. The Church fathers saw in this number five a reference to the five books of the Pentateuch, the books of the Law: as the Samaritan woman had left five husbands and now lived in adultery, the Samaritan people had been married to the Law of God, the five books of the Torah, but now they lived in idolatry. This division between the faithful Jews and the idolatrous Samaritans was manifested in racial segregation, especially when it came to worship and liturgy. The woman tells Jesus: ‘Our fathers worshiped on this mountain, yet you say that in Jerusalem is the place where men ought to worship (John 4: 20). 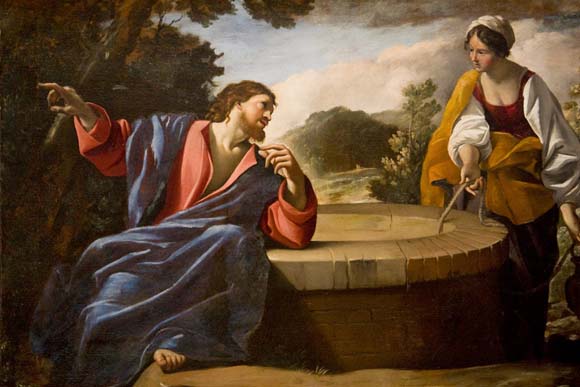 Yet Jesus replies that he will overcome these ancient divisions. He tells the woman: ‘The hour is coming when neither on this mountain nor in Jerusalem will you worship the Father. You worship what you do not know; we worship what we know, for salvation is from the Jews. But the hour is coming, and now is, when the true worshipers will worship the Father in spirit and truth, for such the Father seeks to worship him’ (John 4: 21-23).

The reconciliation wrought by Jesus will re-found Israel: Samaritans, Jews, even Gentiles will be united in the blood of the New Covenant, and in the waters of Baptism that flowed from Jesus’s side on the cross, the living water that wells up to eternal life (John 4:14; John 19: 34). We can think of this passage, then, as Jesus calling back God’s wayward bride, Jesus calling back God’s lost sheep in Samaria.

Some of the great figures in Israel’s history found their wives at wells, usually at a time when sheep, or cattle, or camels are being watered. The servant of Abraham, for example, met Rebekah whom he takes home to be the wife of Isaac at the well outside the city of Nahor (Genesis 24). Jacob meets his wife Rachel by at a well in the ‘land of the people of the East’ (Genesis 29). Moses too met his wife Zipporah at a well in Midian (Exodus 2: 14-22). Now Jesus himself is meeting a Woman at a well, but this time the union in question is the marriage between God and Humanity that Jesus himself brings about.