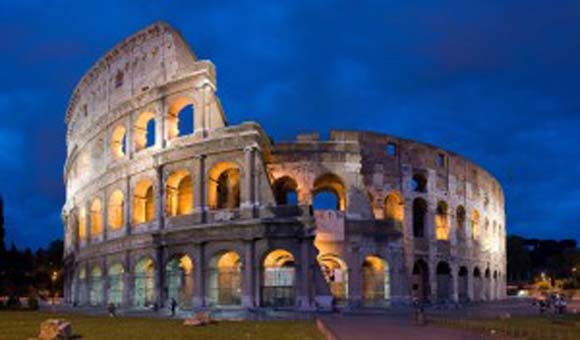 By Matthew Jarvis O.P.
21
A week ago, I heard the philosopher and ‘new atheist’, Daniel Dennett, speak at the Oxford Union. His topic – the impact of the internet on religion – caught my attention, not least because Godzdogz aims to harness the internet for religious purposes.
One of Dennett’s suggestions was that religious institutions are not as permanent as they might seem on the surface; and he singled out the Catholic Church as a good example. The Church is old, venerable, and very large, but also in constant ‘crisis’ – as the headlines never cease to remind us. Dennett made the explicit comparison to the Soviet Union, which collapsed almost overnight, peacefully and without warning. Empires and tyrannies do pass away suddenly. So we can hold out hope that the same might happen to the corrupt regimes of our own day – and Dennett would include the Catholic Church in this pejorative category.
This was, in fact, the subject of an excellent talk I heard back in 2010, to the ex-patriate Burmese Catholic community in the Philippines. The speaker, a Dominican, was particularly qualified to analyse large empires and institutions, having successively been a diplomat in Moscow and an ambassador to the Holy See. Like Dennett, he spoke encouragingly about how apparently impregnable regimes can collapse with almost no warning, applying the historical lesson to the present situation of the military junta in Myanmar. But would this Dominican have agreed that the Catholic Church is in the same precarious situation?
I think not. Dennett’s tacit assumption, of course, is that the Catholic religion is false. His implicit argument runs something like this. Since the truth will win in a fair fight – ‘who ever knew Truth put to the worse, in a free and open encounter?’ (as Milton put it) – and the internet increases the potential for communicating the truth and exposing falsehood, then (Dennett hopes to conclude) the Catholic religion will suffer as the internet grows. 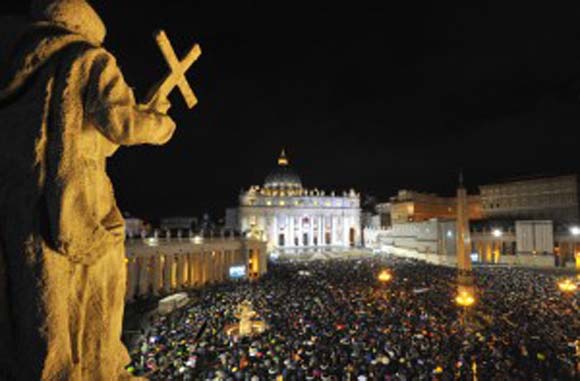 But what if the Catholic faith is true? That is what we Catholics believe. Without truth, our religion is hollow and our ‘faith is vain‘, as St Paul pointed out. But, on the contrary, Jesus endowed his Church with his Spirit of truth, promising that he would ‘lead [us] into all truth‘. This divine dimension of the Church is entirely missing from Dennett’s analysis.
Now Dennett’s position reminded me of the Protestant historian, Lord Macaulay, and the famous passage from his 1840 essay on Ranke’s History of the Popes. It is so beautifully written and expresses so vividly the permanence of the Church, that it is worth quoting at length:

There is not, and there never was on this earth, a work of human policy so well deserving of examination as the Roman Catholic Church. The history of that Church joins together the two great ages of human civilisation. No other institution is left standing which carries the mind back to the times when the smoke of sacrifice rose from the Pantheon, and when camelopards and tigers bounded in the Flavian amphitheatre. The proudest royal houses are but of yesterday, when compared with the line of the Supreme Pontiffs. That line we trace back in an unbroken series, from the Pope who crowned Napoleon in the nineteenth century to the Pope who crowned Pepin in the eighth; and far beyond the time of Pepin the august dynasty extends, till it is lost in the twilight of fable. The republic of Venice came next in antiquity. But the republic of Venice was modern when compared with the Papacy; and the republic of Venice is gone, and the Papacy remains. The Papacy remains, not in decay, not a mere antique, but full of life and youthful vigour. The Catholic Church is still sending forth to the farthest ends of the world missionaries as zealous as those who landed in Kent with Augustine, and still confronting hostile kings with the same spirit with which she confronted Attila.

The number of her children is greater than in any former age. Her acquisitions in the New World have more than compensated for what she has lost in the Old. Her spiritual ascendency extends over the vast countries which lie between the plains of the Missouri and Cape Horn, countries which a century hence, may not improbably contain a population as large as that which now inhabits Europe. The members of her communion are certainly not fewer than a hundred and fifty millions [now 1.2 thousand millions]; and it will be difficult to show that all other Christian sects united amount to a hundred and twenty millions. Nor do we see any sign which indicates that the term of her long dominion is approaching. She saw the commencement of all the governments and of all the ecclesiastical establishments that now exist in the world; and we feel no assurance that she is not destined to see the end of them all. She was great and respected before the Saxon had set foot on Britain, before the Frank had passed the Rhine, when Grecian eloquence still flourished at Antioch, when idols were still worshipped in the temple of Mecca. And she may still exist in undiminished vigour when some traveller from New Zealand shall, in the midst of a vast solitude, take his stand on a broken arch of London Bridge to sketch the ruins of St. Paul’s.

Now a few comments are in order. Those final lines can bring a chill to those of us who imagine our own precious civilisation to be invincible. In the days of the British Empire, they would have had an even greater effect. Next, remember that Macaulay, as a Protestant, is not naturally sympathetic to the Catholic Church, so his words can be taken in a fairly objective light. But he, like Dennett, mistakenly assumes that the Church is merely ‘a work of human policy’.

Of course, the Church is a human institution in one sense, and is composed of sinful human beings (ourselves); but its more fundamental identity is its divine constitution as the Body of Christ. The Church, after all, does not only exist on earth, but also encompasses all those who have died before us in Christ – those in heavenly glory and those being purified – and in God’s eternity includes even now the blessed of future generations.
In today’s Gospel, people doubt that the Christ, the Saviour of his people, could come from remote Galilee. Yet, Jesus of Nazareth has triumphed. We believe he has conquered even sin and death, by his cross and resurrection. But even the non-Christian observer can plainly see the results of his mission. For instance, Algernon Charles Swinburne’s diatribe against immortality, entitled Hymn to Proserpine (1866), contains this evocative couplet:
Thou hast conquered, O pale Galilean; the world has grown grey from thy breath;
We have drunken of things Lethean, and fed on the fullness of death.
The sentiment is often attributed to the dying Emperor Julian ‘the Apostate’, who had lamented the rise of Christianity and sought a return to pagan ways. In the days of Swinburne and Macaulay, the spread of Christianity was even more obvious – and therefore all the more to be celebrated, or lamented.
But Swinburne’s bleak view makes the same mistake as Dennett (and Macaulay), seeing no divine operation at work in the Church. His colourless world is very far from the manifest joy and abundance of life that is the daily experience of Catholics around the world. For us, this joy, this life, this faith, hope and love – all these are witnesses to the divine origin of our religion. ‘For God so loved the world that he sent his Son into the world; not to condemn the world, but that the world through him might be saved.’
The same Almighty God who loves and sustains all things in their very being, is the same Lord who preserves and inspires his holy Church on earth. That Church, which subsists in the Catholic Church now led by Pope Francis, may not always exist with all the same structures or the same exterior appearances – some of which are indeed ‘works of human policy’ – and yet she has received a divine guarantee:
And I say also unto thee, That thou art Peter, and upon this rock I will build my church; and the gates of hell shall not prevail against it. (Matthew 16:18)
May the Church ever grow and flourish ‘in undiminished vigour’, while avoiding prideful triumphalism, to become the refuge and hope of all humanity, especially of the poorest and most downtrodden among our brothers and sisters.