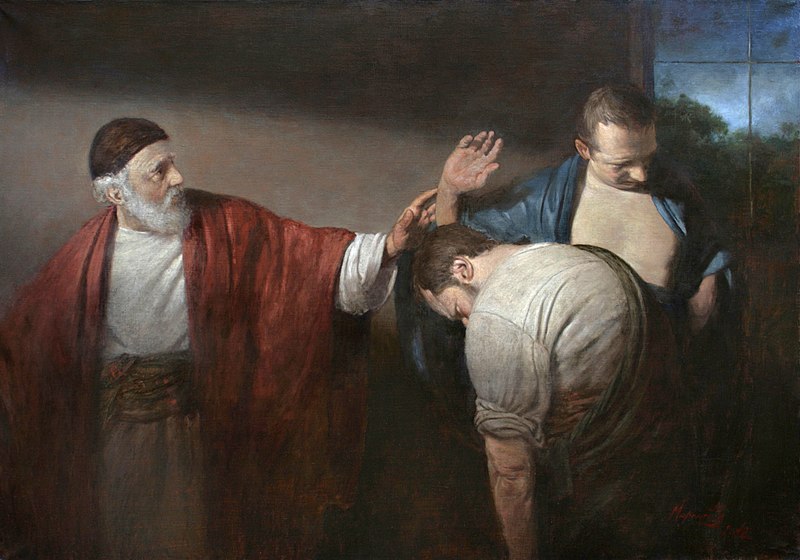 A Man Had Two Sons

Twenty-sixth Sunday of the Year. Fr Leon Pereira OP preaches on the parable of the man with two sons.

Running through the Scriptures is the recurring theme of two sons, rivals before their father. Ishmael and Isaac are pitted against each other for their father Abraham’s legacy. Esau and Jacob squabble for the same from Isaac. Ephraim and Manasseh are not favoured in the order desired by Joseph. The twin sons of Judah, Perez and Zerah, struggle in the womb with each other. Adonijah and Solomon compete for their father David’s throne. The prodigal son and his brother are rivals for their father’s property and love. This theme is the struggle to be acceptable to the Father. In the beginning, Abel’s offering was accepted by God, but Cain’s was not. It ended with murder, the first murder. The slain brother’s blood cries out to God for vengeance. All this because both struggled to be the Father’s accepted son.

How often in our own families is one child accepted, while the other spends a lifetime trying to win favour? How often is the one who never visits the golden child, and the long-suffering child who does everything for her parents is taken for granted, and endures the endless praises of their selfish sibling?

The need to be the accepted child runs deep within us. Our modern obsession with celebrity, the pressure to be young, fresh, strong, beautiful—what else is it than the unquenchable yearning to be accepted by the Father they do not know yet yearn for? Why else are Christians so frightened of admitting their sins? The fear of being the unacceptable child remains.

When the parent in question is the perfect Heavenly Father, how can anyone hope to be the accepted and loved child? One solution is to shift the goalposts. Modern Evangelicals dispute a teaching they call ‘hyper-grace’—an exaggeration which denies the necessity of repentance and confession of sins, and considers the moral law as pharisaical legalism. By shifting the parameters of what it means to be the acceptable child of the Father, whose only-begotten Son tells us to ‘Be perfect even as your heavenly Father is perfect’ (Matt 5:48), we make ourselves perfect and acceptable.

At first glance it looks positive. Heaven is for everyone, only because there is no Hell. One does not need to be in a state of grace to receive Communion, because it is not even possible. No Christian is called, by God’s grace, to heroism—because the moral life is impossible. This is not raising the prodigals from their grime and muck, but rebranding their pigsties ‘palaces’. The new pharisees misuse words like ‘accompaniment’ while stranding people exactly where they’ve been, with their vices christened ‘virtues’. Their presumption is a childish rebellion, and deep down it blames God—it’s His fault for asking us to be perfect, creatures He made imperfect!

The fear of honestly and contritely confessing our sins, common to Evangelical hyper-grace and Catholic mercy-plus, is the fear lurking within us all of being the unacceptable child. But since this is somehow God’s fault, we can shift the goal-posts and call evil good, or at least tolerable. To be acceptable, we can’t afford to confess anything substantial or true; certainly nothing which corresponds to actual sins.

The perfect child does not exist. We cannot be the perfect, acceptable son or daughter we would like to be. Becoming the acceptable child is a matter of repentance: of letting go of the past in the face of the future we are offered, of accepting that we cannot—by our own efforts—do the Father’s will. Only in the only-begotten perfect Son, by His wounds and His grace, are we made anew. You see, the Gospel tells us the favoured ones are not the pharisees who have rebranded perfection, while themselves remaining white-washed sepulchres, but the whores and crooks who desire Jesus not on their own terms, but His.