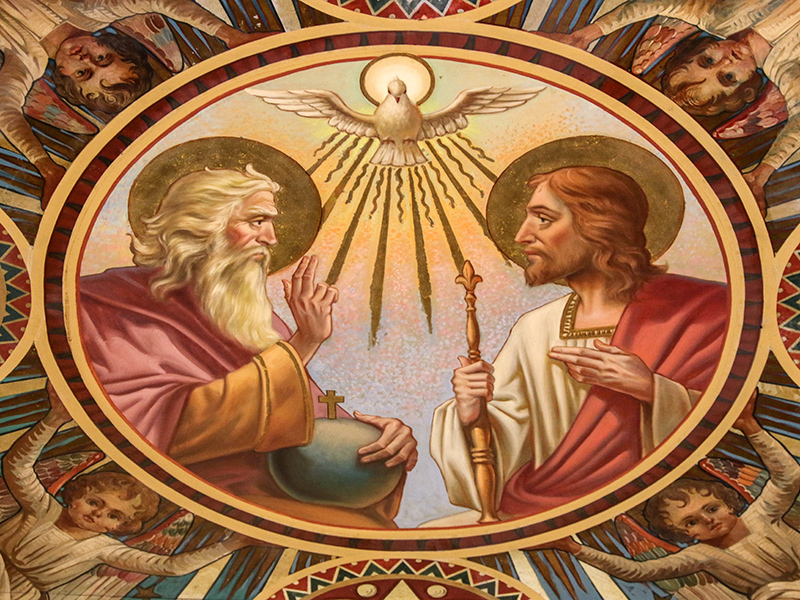 A Word of Friendship

Second Sunday of Christmas. Fr Richard Conrad unfolds some of the mysteries of St John’s Gospel.

Today’s Gospel can be summed up by saying: ‘In Jesus, God speaks to us.’ Words simple enough to be grasped by a 6-year-old, profound enough to amaze a 66-year-old.

Imagine an artist: she conceives an idea of what she will craft, then puts her idea onto canvas, or into stone. Imagine a teacher: she ponders how to convey truth, then words come forth. So we may picture God as a wise Artist who conceives ‘beforehand’ what he will craft, ‘then’ calls the cosmos into being – though the words ‘beforehand’ and ‘then’ don’t capture God’s eternity. So great is God’s Wisdom that the Book of Proverbs pictures Wisdom as a great Lady who is God’s Child and Master Craftsman, and offers truth. Sirach pictures her pitching her tent in Israel, because by giving his People his Law God shared something of his Wisdom. The Old Testament also pictures God as speaking the cosmos into being and beauty, and as stretching forth his Word to heal, inspire and liberate.

St John picks up these ideas. He speaks of the Word through whom all things were made; this Word enlightens all human beings, giving them the ability to grasp truth.

John had learned something even more wondrous. At the beginning of his Gospel, before sharing details of his time with Jesus, he deploys the Old-Testament expressions to tell us what the Church has treasured ever since. God’s Word is not simply a poetic expression, a personification; he is a Person ‘in relationship with’ God; he is from God as ‘the only Son from the Father.’ He does not come from God as creatures do, but is, eternally, ‘true God from true God.’ Rather as my ideas are from my mind and within my mind, so the Word, the Son, is from God the Father and ‘abides in the Father’s bosom.’

God put something of his Wisdom into creation; Hopkins reminds us, ‘The world is charged with the grandeur of God.’ But while the artist puts something of herself into her work, it is not her friend. She gives herself to her friends, in a two-way relationship, sharing not only her ideas, her plans, but also her understanding of herself. Of course she knows herself only partially. God the Father knows himself fully; he expresses himself without reserve in his eternal Word, who is thus his perfect Image and cannot be less than a co-equal Person. His Word, his Wisdom, is his Son.

‘The Word became flesh, and pitched his tent among us.’ 2,000 years ago God spoke his Personal Word into the midst of human history. This is a Word of teaching: Jesus is our New Law, the Pattern we are to follow. But it is more: it is a Word of friendship. God has shared himself with us, sent us his understanding of his own self. ‘The only Son, who is in the Father’s bosom, he has made him known.’ God has expressed himself to us as completely as we can take in while still on pilgrimage. He has spoken grace, personal love; he has spoken truth in the sense of loyalty.

John tells us that Jesus came with life and light, love and truth – also that ‘the Light shines in the darkness.’ His Gospel records how Jesus ‘came to his own home,’ came back to Judaea where he had been born, and the local authorities killed him. They exemplify the mystery of evil, the world’s strange fear in the presence of Love. They stand for the willingness to destroy Life, the warped priorities that cannot cope with Truth, the repeated attempts of darkness to extinguish the Light, all of which must fail, for ‘the darkness has not mastered it’ – neither understood it, nor defeated it. Instead, the Light has defeated the darkness! John saw him do it: ‘We have beheld his glory’ means ‘I saw him on the Cross.’ That was when God’s love was spoken persuasively enough to conquer fear, God’s loyalty was uttered powerfully enough to draw us to his heart.

St Paul says God the Father chose us in Christ: in Christ, the Eternal Wisdom, he conceived of us as his work of art, his new creation – but also as his friends. So in Jesus, God spoke to us: spoke himself, spoke his friendship, the kind of friendship that can lay down its life, and by doing so invite and attract us into becoming God’s personal friends.

fr. Richard Conrad teaches dogmatic and sacramental theology at Blackfriars, Oxford, where he is also the director of the Aquinas Institute.
richard.conrad@english.op.org