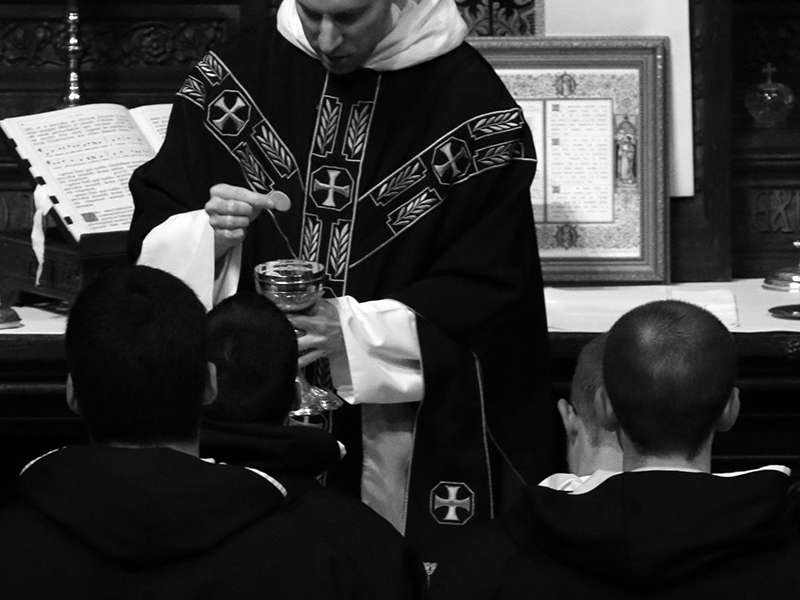 An Antidote to Sin’s Narcotic Slumbers

Twenty-Sixth Sunday of the Year (C)  |  Fr Oliver James Keenan says that true religion is like Narcan, awakening us to see life more fully in reality.

According to the memorable paraphrase, for Karl Marx religion was nothing but “the opium of the masses”, an artefact of human psychology that provided a way of coping with the unpalatable aspects of life by escaping into the promise of otherworldly paradise. Religion, for Marx, is about seeing less, anaesthetising ourselves to the harsh and painful truth. In fairness, something like this might be going on in our first reading, where those who are “ensconced so snuggly in Zion” are comfortably “sprawling on their divans” and ivory beds, dining on all the most delicious things of the land, without a second thought for the ruin of Joseph. Until, that is, they are awoken from their comfortable fantasy: “the sprawlers’ revelry” is put to an end by the shock of exile.

The gospel, with its parable of the rich man’s definitive exile, makes it clear that the Christian religion affords us no such comforting illusion. During his earthly life, the rich man failed to see Lazarus; he chose to see less than the full reality of Lazarus’s humanity. Yes, in a literal sense, he undoubtedly noticed Lazarus, seeing him as an object, an obstruction at his gate. But whilst he was anaesthetising himself with fine purple linens and fine dining, did he really see him as a person, as a brother? Perhaps the rich man even intentionally averted his eyes from Lazarus’s suffering, choosing not to allow his thoughts to linger over the disturbing, even disgusting, image of an ulcerated man being licked by the dogs. Who could take a long hard look at such a scene and fail to be moved to change? But the end of the parable inverts this: it is Lazarus who is given the dignity of a name, and the rich man who is forced into anonymity. A cautionary tale that empty words are not enough to save, but also a reminder that grace, by which we are brought to share in the love of God, enables us to see more than we see by nature, and empowers us to love more and more deeply.
The rich man, learning the error of his ways, wants to wake up his brothers to see reality, so that they don’t suffer his fate. Who could fail to listen, if Lazarus returned to tell them? But is the rich man again taking refuge in a false optimism? The words Jesus attributes to the Father—“they will not be convinced even if someone should rise from the dead”—are bluntly realistic, confirmed in due time by those who greet Jesus’s own death and resurrection with incredulity.
The resurrection cannot simply be used as a bargaining chip in an argument, just as a sort of ultimate “I told you so” that vindicates Jesus’ teachings. To treat the resurrection as just an inert fact to prove a point would be to domesticate it, to subdue its explosive effects into the type of comfortable certainties that got the rich man into all that trouble. Rather, the resurrection—and its power flowing to us in the sacraments—is something that is supposed to change us, giving us the eyes to see reality for what it is. It is this power that pulls down the “great gulf” that lies between us and God, between us and our neighbours. The power that overcomes our opposition to God also pulls down the ‘great gulf’ of our sinful fantasies that dis-embed us from reality by closing our eyes to the suffering and sorrow of our fellow humans.
Back to Marx. He was right enough, if we place ‘religion’ in scare quotes and take it to mean the corrupt ‘religion’ of idolatry. Idolatry is not just about worshiping golden calves. Its anaesthetic effects often creep into our lives in small ways, whenever we love creaturely goods more than the creator who gives them. But there’s an antidote to opium: it’s called Narcan, and it features from time-to-time on hospital dramas. The one who’s overdosed wakes up with a jolt, within minutes of its administration. Christianity is more like Narcan than opium. The Eucharist is our weekly shot. By its power we are awakened to live more fully in reality, to see its resplendent beauty without denying the darkness caused by sin. And sometimes we’re awoken with a jolt.
Amos 6:1. 4-7 | 1 Tim 6:11-16 | Luke 16:19-31
Photo by Fr Lawrence Lew OP of the administration of Holy Communion at a Dominican rite Mass.
Categories:
26th Sunday of the Year