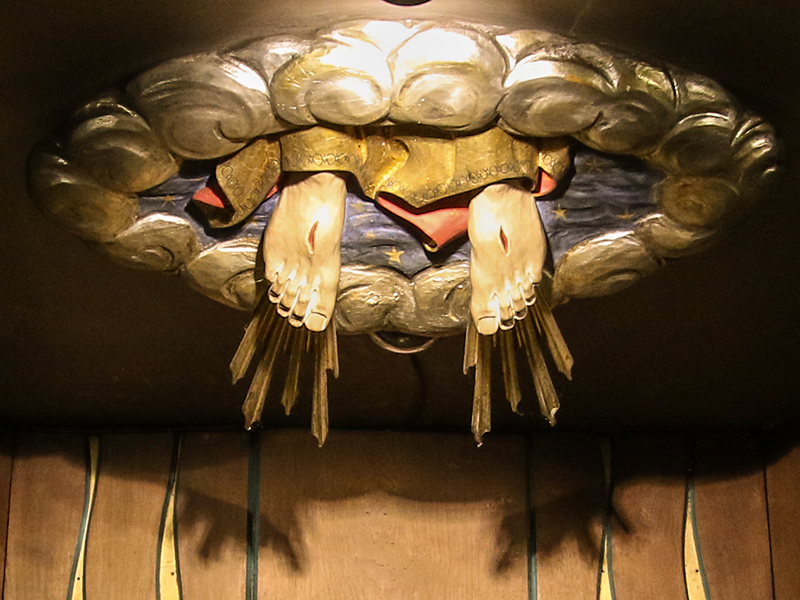 By Peter Hunter O.P.
55
The Ascension of the Lord (A)  |  Fr Peter Hunter considers the bodily physicality of Christ’s Resurrection and Ascension into heaven, which also helps explain why social distancing is so hard.

It’s a commonplace of Ascension sermons to talk about the fact that artists have often stressed the physicality of the Ascension in their paintings and sculptures. Painters often painted the footprints left on the earth by the ascending Lord. My favourite work in this genre is the Ascension chapel in the Anglican Church in Walsingham, which has our Lord’s feet poking through the ceiling of the chapel!

I guess people stressed the reality, the physicality, of the Ascension partly because the story is so full of meaning that the temptation was to say, “This is too full of meaning, of symbolism, to be real – it’s just a story.” Or, in a related vein, to say, “Jesus had died. He was a spirit. It wasn’t a physical body which rose from the earth.” If that is what those artists wanted to deny, I am completely in agreement with them. Both of those temptations lead us away from the truth.

But Christians get to eat their cake and have it too. If God is Creator, if every detail of human history can be used by God to tell his story, then we can assert that the Ascension really happened and happened to a real human being, and yet it has a profound meaning. Of course, that still leaves us needing to explain that meaning.

The idea is that the Resurrection is not just a return to the kind of life we have now, life in this world. It is the beginning of a new world, a human bodily life in the Kingdom of God. Christ rose from the dead into Heaven, into God, so that as representative of humankind, he might share in the life of God, and so that in him, we should share the life of God. The Ascension, in addition to being a real event in the life of Christ, underlines for us this way in which the Resurrection is into Heaven, and encourages us to hope that where Christ our head has gone, we, his body the Church, will also follow.

There is a very interesting video on the internet by Russell Brand in which he discusses the fact that this pandemic has many people turning to prayer, some for the first time in their lives. He talks about our physical, sense-based experience which, “on some level we know is not enough.”

One particularly bad reply to this would be to say, “Yes, Russell. There is more than this. There is an afterlife.” Christians do not simply hope for an afterlife if by that you mean that some part of us (our soul perhaps) will go on after death. We aren’t souls. All the greatest parts of life involve our bodily presence to each other. That’s one of the reasons social distancing is so hard. Our full life is bodily life. Like those artists I talked about at the start, we want to insist that when we rise into Heaven, our feet will leave footprints on the earth. But also, we look forward, not to an “afterlife” but to real life, indeed a greater and more intense and more joyful life than we have ever lived here on earth.

We hope to be resurrected into life, into Heaven, to join Jesus in his life with the Father. The risen life isn’t just a new kind of life, like this one, only without the misery and pain, without sickness and death. It is a new creation, a new beginning entirely, a new creation built upon the risen-and-ascended life of Christ with God. Even in this life, by Baptism, we die to sin and rise to this new and profound kind of life and one day, God willing, that life will flower perfectly into our life with Christ in God. That is the meaning, that is the hope, of the Ascension.