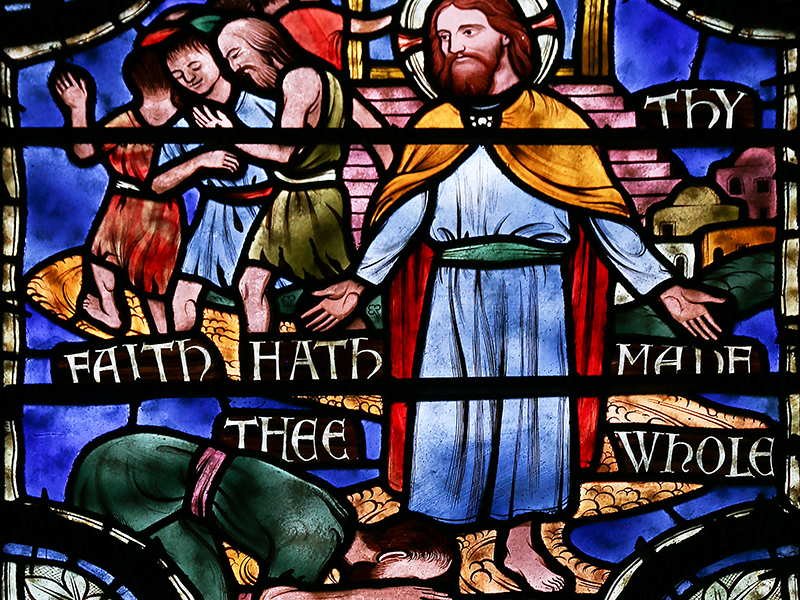 Boundlessness in the Boundaries

Jesus walks to Jerusalem.  I wonder how many of us ponder the significance of his walking?  He set his face to go to Jerusalem (9.51) and so he began what is a kind of pilgrimage, making his way on foot to the Holy City, as so many others did too.  Luke has told us that there are a great many who walk with him, as do we who hear the gospel now.

His is not the most direct of routes.  It is not marked by milestones,  but by the people he meets and by the stories and parables he tells his companions. This pilgrimage we make together is one in which the meaning and depth of his purposes unfolds in us, little by little, step by step.  In this passage he is walking along the boundary between Galilee and Samaria.  The most direct route from Galilee to Jerusalem would take you into the region of Samaria but most Jewish pilgrims would not have wanted to enter Samaria.   Nor would they have wanted to meet any Samaritans, because at the time there was a massive and long-standing racial and religious tension between Jews and Samaritans.  But it is clear from so many passages in the gospel of Luke, that when Jesus walks along this border area he does it, not to avoid meeting Samaritans, but so that so that he will meet at least one.

The 10 men who approach him have been excluded from their former lives. They have been cut off from their families and friends, their livelihoods, and from worship.  They are forced to band together.  Leprosy was nigh on incurable.  It left you as good as dead.  But it is not just within the purposes of Jesus to seek out people such as these outcasts. It is his purpose. I am reminded of stories from the trenches of World War I.  On those battle fields there was an area between enemy trenches designated as no man’s land, and there are stories of brave soldiers who stepped out beyond their trenches and risked their lives to rescue a fallen comrade, to lift him up, to save him and heal him.

These lepers cry out, “Jesus, Master, have mercy on us.”  They ask for his mercy, and God’s mercy is indeed visited upon them.  Luke’s gospel is not only the gospel of the lost being found, it is also the gospel in which Mary sings of the God who looks on the lowly, and raises the poor.   But it is in this no man’s land and in one of these outcasts, that Jesus finds and names this faith in such a God. And so it is along this very human boundary, that the boundlessness of God’s action is revealed.   What happened to this Samaritan leper challenges all presumption, for the boundaries we make between us are not always so obvious.   Some are learned from childhood, go very deep within us,  and only come to light if we we examine our attitudes to those who think of as  “other”.

When Jesus tells them all to go to the priest, he uses priests in the plural, not specifying whether the priest should be Jewish or Samaritan.  But what this Samaritan does is quite startling.  When he sees that he has been healed, he turns back and prostrates himself not before his priest, but at the feet of Jesus. Faith has been found in the one cast out.   Jesus tells him that it is in fact his faith which has made him well. In Jesus, God is indeed observing the boundaries, which his people have so fiercely observed for so long for these are the very places where he goes to seek out the lost.

So there along the boundary between Samaria and Galilee something more than healing has happened.  Division and not just leprosy is dispelled. God is gathering a people to himself from all the nations of the earth, and it cannot be denied that he gathers in all sorts of people.  This man is an outsider in so many ways, and yet he is the one who is chosen for such grace.  The greatness and fullness of what he has received is seen most clearly in his singular gratitude.

In Luke’s gospel, as Jesus makes his way slowly to Jerusalem, he is pointing us towards Jerusalem and with every step nudging us towards a journey of our own.  He would have us encounter those who for us are “other”, but in whom, we must learn to recognise God’s Spirit, alive and active.

Jesus will accomplish his purpose on the Cross, outside the city walls.  By that death in that no man’s land, he would break down our division, and he would make neighbours of us all. By his gift of the Holy Spirit, he directs our feet towards the new and heavenly Jerusalem where all are invited to enter in and to live together in the fullness of his peace.

Photograph by Fr Lawrence Lew OP of a stained glass window in the National Cathedral in Washington DC.