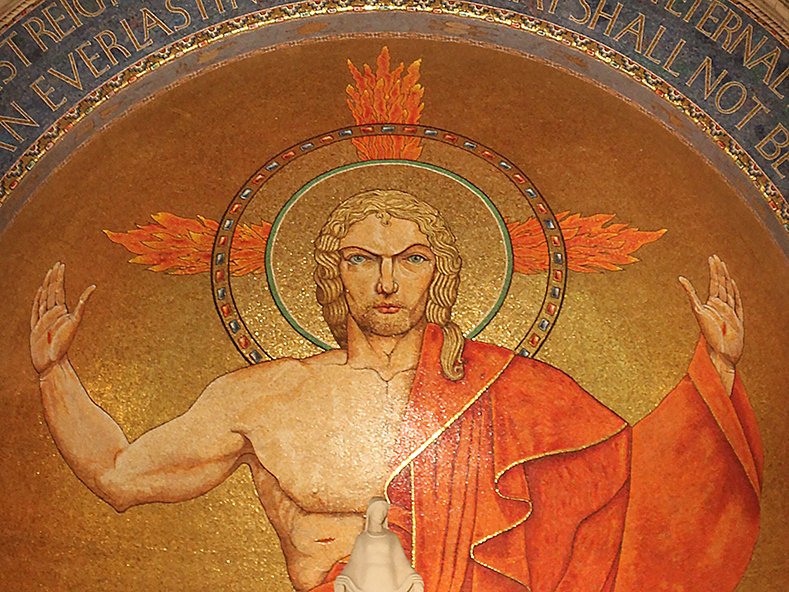 Twenty-Sixth Sunday in Ordinary Time (C)  |  Fr Aidan Nichols ponders the theme of judgment both in this life and thereafter, seen in the light of Christ’s glory.

The common theme of today’s readings is the theme of judgment.  The prophet Amos – we are in the eighth century before Christ – predicts a miserable end for the high-living elite of his people.  They connive at the sufferings of the poor.  And they are syncretists – taking bits of religion from all over the place, mixing it up, and imagining that the jealous Lord God of Israel will be satisfied with such an offering after all he has done to reveal his difference from the gods of the nations.

Here the judgment involved is practical and realistic: we could call it ‘this-worldly’.  The natural leaders of Israel and Judah, spineless and corrupt, will come a cropper when the pagan super-powers move in to deal with their pathetic little operation.  So the ‘judgment’ takes place within the historical process, and Providence uses agents within that process as its instruments.

Does Amos believe in judgment in any more ultimate sense – judgment beyond death – which would also be in a more refined sense, bearing on individuals in their personal exercise of responsibility during life?  This is hard to say, as belief in immortality fluctuated in Old Testament times: it’s not always easy to say where, for example, appeals to God for mercy in judgment, or for vindication by judgment, refer to life after death rather than – or as well as – life in this life.

By the time of our Lord, on the other hand, the sort of Jews he was most concerned to dialogue with did accept that judgment also takes place in a realm beyond this one, in the wider reality in which our world is set.  That is reflected in the Parable of Dives and Lazarus.

The parable begins from an observable fact.  Rich people can behave despicably to poor people without any noticeable divine reaction in history to right the balance.   Part of our Lord’s intent in this parable is to re-state for his Jewish hearers the reality of a supra-historical divine judgment, both as a threat to evil-doers such as Dives and as a consolation to their victims, the Lazaruses of this world, and to do so by arguing that only this belief makes full sense of the Torah: the Law of Moses and the teaching of the prophets who defended it.  The overall thrust of biblical revelation, he is saying, is towards a real, ethically determined judgment for everyone at their personal ending, at their deaths.  All Jews can get this message because they have Moses and the prophets – so let them listen to them.

The Epistle of this Mass is, doctrinally, the climax of these readings on judgment even if liturgically it is placed in the middle.  In the Epistle we see what the theme of judgment looks like when it has become fully Christianised – transformed through being not just related to Jesus Christ, his teaching, work, and person (that could be said of the Gospel reading though, as we saw, it doesn’t go beyond the Jewish problematic), but positively determined by that relationship to him: determined by it through and through.

In this letter of Paul to Timothy, judgment is the same thing as what the apostle calls the ‘appearing [or manifestation] ‘of our Lord Jesus Christ’.  The light which, in the act of judgment, the transcendent God sheds on sinner and sinned against – burning for the sinner, kindly for the sinned against – is the light of Christ.  It is the light of the Glory of God which shone out in the Face of Christ and now can only be described in relation to that Face, the Face that is the expression of his person.  The crucial element in judgment is now the Face of the Crucified and Risen One, the One who knows all sin and its malice, since he took its guilt on himself, and who understands from within the cost of its forgiveness since the all-holy God cannot wave it away as ‘not mattering,
really’.

Our life is among other things a preparation for seeing our Lord’s Face in judgment.  We should practice for, and pray for, a good death, a Christian death.  It is important that we should know this, because we are immortal animals, called to glory.

Photograph by Fr Lawrence Lew OP of the apse mosaic in the Basilica of the National Shrine of the Immaculate Conception in Washington DC.