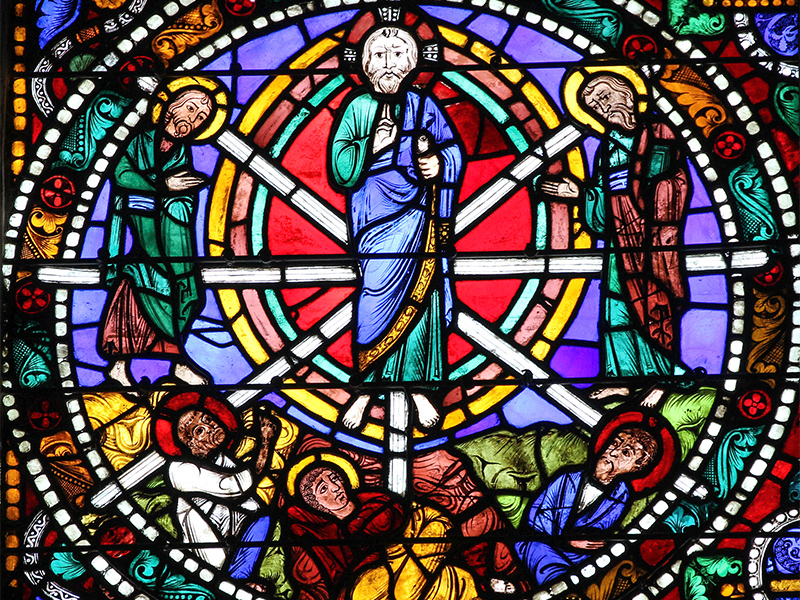 Fuel for the Fire

Second Sunday of Lent (C)  |  Fr Nicholas Crowe says that the true goal of the Christian life is to acquire the Holy Spirit of God.

I once heard a sermon in which the priest spoke about a very strong childhood memory: his parents had taken him to visit a church and he was overwhelmed by the beauty of a stained-glass window which depicted the communion of saints. He asked his parents ‘who are these people?’ His parents replied: ‘they are the saints.’ And as a small child this priest got the idea that the saints are people who are filled with light.

I like this story: it rings true to me. When I think about the holy people that I have met in my life it does seem like there was a kind of light shining out from them. Somehow holy people are radiant with the love of God: the work of their transfiguration is taking place right before our eyes through their union with Jesus and their openness to the recreating power of the Holy Spirit. The saints are living windows into the mystery of the marriage between divinity and humanity forged in the person of Jesus: they are transparent to the will of God and so they shine.

Sometimes we can too easily assume that this intimacy with God that the saints and holy people enjoy is meant only for a spiritual aristocracy and that the rest of us must know our place and make do with something much more mundane. But this is not the message of our Gospel reading. When Jesus climbed the mountain with his closest companions and shone with divine light as he allowed his human nature to become utterly transparent to his divine nature he showed us our own destiny: we are, each one of us, called to be transfigured. Our human flesh, imprinted with our sins, worn down by age, anxiety, sickness, neglect and misuse is destined to be transformed through our union with Jesus and the action of the Holy Spirit. As St. Paul put it in our second reading: ‘the Lord Jesus Christ…..will transfigure these wretched bodies of ours into copies of his glorious body’.

We see, then, what God offers each one of us in the Transfiguration of Jesus and the radiance of our brothers and sisters who through their union with Jesus have burned brightly in the same love. We are called to Transfiguration: beginning in this life and coming to completion in the next. This mystery is powerfully explored by Abbot Erik Varden of Mt. St. Bernard’s Abbey in his recent publication ‘The Shattering of Loneliness’. In this book, Abbot Eric recounts the story of an encounter between a man named Motovilov and the great Russian hermit and mystic St. Seraphim of Sarov. Motovilov came to Seraphim with a question: what is the aim of the Christian life? What is the goal? Motovilov was already trying to live a good life. He tried to pray and he went to church. Yet he remained unsatisfied: he was thirsty for something more.

St. Seraphim told him that the true goal of the Christian life is the acquisition of the Holy Spirit of God. Christianity is not so much about doing something as becoming someone. It is not primarily about a moral code but the transformation, the transfiguration, of the human person. Good deeds performed in the name of Christ, prayer, fasting, almsgiving, all of these are means to an end: indispensable means, according to St. Seraphim, but means nevertheless to the goal of complete transparency to the Spirit. St. Seraphim tried to expand Motovilov’s mind, tried to impress upon him the awesome potential of a human heart that welcomes grace in prayer and loving self-sacrifice.

Motovilov listened, he tried to understand, but he remained confused. How can one know that one is living in the Spirit? What does it look like? What does it feel like? How do I get there? In reply, Seraphim simply took Motovilov by the shoulders and answered: ‘we are both in the Spirit now’. Motovilov described what happened next:

‘Imagine the face of a man talking to you from within the centre of the sun, in the dazzling light of its midday rays’.

As the two men stood together, both shining like Jesus at the Transfiguration, St. Seraphim made Motovilov describe what he was experiencing in his own words: in his body he felt a warmth and a sweetness of scent, in his soul a deep sense of peace that only comes to those who share the divine life, and the joy which is the hallmark of the touch of the recreating Spirit of God. This moment was not the fruit of Motovilov’s effort and striving but a gift from God offered through the prayer of St. Seraphim that Motovilov simply accepted and welcomed. God parted the veil for a while and made visible the ongoing work of the Spirit in Motovilov’s life. He allowed Motovilov to recognise and discern the signs of the Spirit moving in his soul. This gift was given, St. Seraphim explained, so that Motovilov might share what he had experienced with others and testify that the radiant sacred humanity of Jesus at the Transfiguration reveals our destiny: we are called to transformation, to transfiguration, through our union with Christ. We are called, as Abbot Eric puts it, ‘to offer ourselves as fuel for the burning fire of the Spirit.’