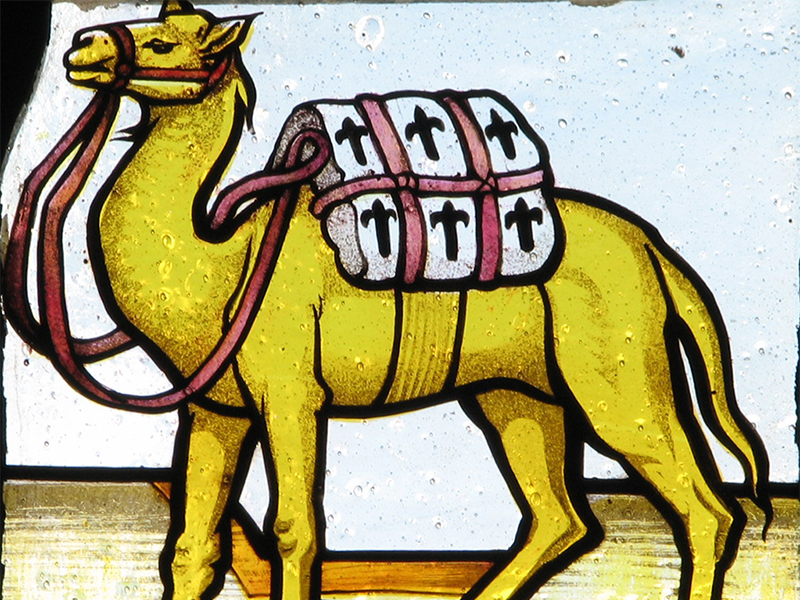 “It is easier for a camel to pass through the eye of a needle than for someone who is rich to enter the kingdom of God” (Mark 10: 25), so Jesus tells his disciples, as they witness a rich man, who wanted to know what to do in order to inherit eternal life, turn down the invitation by Jesus to join them.

It’s an absurd picture, of course, which readers down the ages have sought to moderate.  In the fifth century, St Cyril (c.375-444), Patriarch of Alexandria and Doctor of the Church, asserted that the word kamelon, ‘camel’, must be a copyist’s mistake for kamilon, ‘cable’.  Thus, while it would be difficult, it need not be ridiculously impossible for the rich to enter heaven.  It would be like forcing a cable through the eye of the sort of heavy duty needle in the tool kit (say) of a professional tentmaker (like St Paul) — not, obviously, a needle as used by seamstresses or surgeons today.

There have also been claims about a narrow gate in the Jerusalem city wall, such as could be opened after the main gate was closed for the night, to which gullible pilgrims were conducted, no doubt for a small fee, to see how a camel might squeeze through.   This has been rumoured since at least the fifteenth century, and possibly as far back as the ninth.

Of course, such ways of dealing with the text are rather ludicrous. Mainly, however, don’t such attempts to make Jesus sound more reasonable simply miss the point? Surely he was joking, teasing, deliberately provoking his disciples, making fun of their literal-mindedness — and that of subsequent readers of the story, like St Cyril, and ourselves too if we fail to allow for his sense of humour.

A perfectly decent Torah-abiding man turns sadly away when Jesus tells him to sell everything and follow him — one of the few instances in the gospels when someone refuses his call.  Does it anger or grieve Jesus?  On the contrary, he seems unsurprised, shows his affection for the man and lets him go. He takes the man’s departure as an opportunity to test his disciples.

Hearing him say that being rich inhibits one’s entry into the kingdom of God makes the disciples ‘exceedingly astonished’, so that they ask one another who, in that case, can be saved.  They might have asked Jesus, but he will answer them anyway.  As it appears, they have the deep-seated assumption natural in their culture that wealth is a proof of divine blessing. It would be easy to document the background: Abraham, for example, the friend of God, was enormously wealthy, with vast flocks of sheep, like the other patriarchs and the kings of Israel.

For that matter, it would not be difficult to identify comments in our social media today, and even policies and political decisions in our own divided society, which reflect attitudes that are essentially the same as the disciples reveal here.  No doubt, with rhetoric about the option for the poor, we could not write them off; but in the meritocratic culture we inhabit in the West, secular and increasingly pagan as it becomes, isn’t success measured by income, and don’t the rich seem to have inherited the earth?

Jesus’s penchant for irony appears at the start of the story as he snubs the rich man, who addresses him on his knees, politely, deferentially, as “Good teacher”, and gets the immediate self-deprecating riposte:  “Why are you calling me ‘good’— God alone is good!”

There is surely even more humour at the climax of the story. When Simon Peter, perhaps self-importantly, or self-pityingly, or only in bewilderment (again it is for us as readers to decide), reminds Jesus that he and the other disciples “left everything and followed you”, Jesus lets his imagination break out in a wildly surrealistic picture.  Since they have left — lost — so much, the disciples will receive everything back — “one hundredfold now in this time houses and brothers and sisters and mothers and children and fields” — admittedly “with persecutions” — slipping in parenthetically this wry and sobering reference to the inevitability of martyrdom. For the rest of the promise, however, who wants houses, brothers and sisters, and so on, multiplied in their hundreds?   If this is the quantifying language that the disciples may be supposed to understand then isn’t Jesus ribbing them, assuring them with affectionate irony that what they will inherit is simply unimaginable?

‘Only God is good’, the rich have as much hope of inheriting eternal life as a camel has of passing through the eye of a needle, those who sacrifice family and property to follow Jesus will get everything back a hundredfold — it falls to you and me now to listen out for the gentle humour in that voice.

Photograph by Fr Lawrence Lew OP of a stained glass window detail in the Old Ashmolean in Oxford.