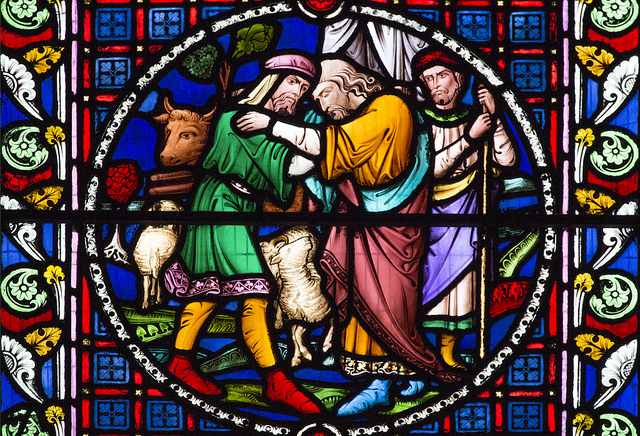 Mercy and Justice Have Embraced

Fourth Sunday of Lent. fr Andrew Brookes reflects on the relationship between justice and mercy.

What is today’s Gospel parable really about? Mercy is clearly central to the parable. The father is lavish in his mercy. The younger son receives more mercy than he expects. The elder son is chided for thinking the mercy shown is excessive and in some way unfair on him. This could be summed up as ‘Be merciful as your heavenly father is merciful.’

But Jesus is doing more than this. He is teaching about the relationship of mercy to justice, and as such showing more clearly what mercy is. The ministry of Jesus needs to be set in the context of the Old Testament, something Jesus came to fulfil.

This means keeping a focus on the justice of God which is central to the whole Bible. Jesus emphasises it numerous times and claims to be the judge who will establish righteousness. If God is good and powerful then God simply cannot overlook evil and injustice. To do so is to fail to be good. God is so good that he is full of wrath. God’s passion for justice and to overcome evil is such that in his wrath, which is his passion against sin, evil and injustice will burn up sin, evil and wipe out injustice, and reward the just. That is what the wrath of God is. It arouses fear but also hope in those who thirst after justice.

Secondly, it means grasping that God made a human race, not just a collection of individuals. The whole human stock, descended from our first parents are connected and inter-related. We know this is true sociologically and historically but it is true in the unchanging wisdom of God before and beyond these empirical measures of it. In his truth and in justice God knows that the human race since its origins has done wrong and because humanity was made as one connected family then that sin has affected us all. So we are under his judgement and wrath.

But God’s goodness also means that God is merciful. This means that God is filled with pity for what he has made, and has chosen to bind himself to us with a faithful and ongoing concern, like that of a father for a child, even a wayward child. He has made covenants with us. His mercy leads him to keep helping us in our plight. He knows our wilful sin, but also our weakness and misery beyond and alongside that. His mercy, flowing from his goodness and truth prompts him to forgive and offer grace to help us be righteous again. Forgiveness is like an act of recreation: it is a fresh start.

God gives us the ultimate fresh start. God forms another humanity, founded not on a mere created human being, but on the Eternal Son of God, who took human nature to himself. In Christ, human nature, due to the divine life at its centre and the graces flowing from this, lived a perfect life pleasing to God from its conception unto death. He did this to begin a new humanity, a new creation, shown clearly in his resurrection. Paul has explained this wonderfully in our second reading.

God has exercised mercy and forgiveness so as to make us just, able to live just lives, bringing in a just kingdom. Mercy is the means by which the goodness and wisdom of God establish justice and wipe out evil and injustice.

Jesus addresses aspects of the true relationship of justice and mercy. The younger son receives mercy, far more than he thinks he deserves or that even an indulgent and kind father can exercise without making a mockery of his justice. He is restored as a son, not just a slave or house servant. But he then has to act as a son should, working justly for his father in his company.

The elder son is challenged by his father to see how justice is not compromised by mercy. He has not lost out on his reward and inheritance for being just (even though he is reliant on the goodness of the father to him for this). He is asked to see that the goodness of God, from which both justice and mercy flow, is extended and made more fully manifest. His brother too is part of this family in Christ, a family that can truly call God ‘Our Father who art in heaven’.

Both sons were surprised by the mercy of their father. We like them are invited “to taste and see that the Lord is good”, immeasurably more good than any earthly father or mother could ever be, divinely good. We each have to choose whether we wish to remain merely part of the old humanity, riddled with sin, or go to the cross, ask for mercy, and then cross over and become part of the new human race founded on Christ, emerging from the tomb, as from a womb, within the Risen Lord, in the Body, or humanity, of Christ, able in his grace to do works of justice pleasing to God, and extend mercy, and through that justice, to others. Having chosen that, we have to keep choosing it, so as to root out the remnants of the old humanity, and increasingly be renewed in Christ, and in his righteousness which is both merciful and just.

The image above is taken from a stained glass window in the Church of St Mary de Castro in Leicester.