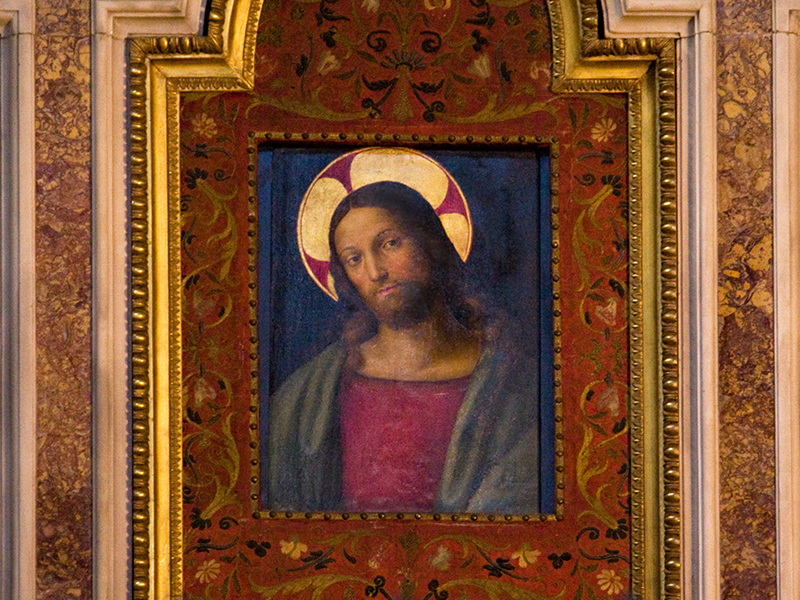 Thirty-Second Sunday in Ordinary Time (B)  |  Fr Richard Ounsworth calls us to renew our consecration to God as a priestly people.

Every organisation needs a treasury, and a treasurer. That’s as true now as it was two thousand years ago when Jesus and his disciples sat watching the comings and goings outside the treasury of the Jerusalem Temple. The Jewish historian Josephus, who was himself a priest of the temple until it was destroyed in the year 70, tells us that many people did indeed follow Christ’s precepts and give generously to the temple treasury anonymously, just as many others received, equally secretly, from the temple’s almsgiving budget.

But much of the reason for the temple to have all this money was to enable it to function: to feed the priests and the Levites who worked there, to pay for cleaners, to buy the wood for the fire, the gold for the vessels and the silk for the veil and the vestments. And the poor widow who offered her last two coppers to the temple knew this perfectly well. With, as Our Lord says, her whole livelihood – literally, her whole life – she affirms, and means to affirm, the importance of all these things. Not, we may suppose, simply because she liked gold and silk and what-have-you for their own sakes, but because she knew the importance of what they point towards. The temple, with its cult and its priesthood in all its magnificence pointed towards the presence of God, the true King of Israel, among his people. The poor widow, like every pious Israelite, went up to the temple to seek some sign of that presence, and to visit the place where the mercy of God is to be found.

One of the most powerful signs for this widow would have been a glimpse from time to time of the priest coming out of the sanctuary after performing the morning sacrifice. Perhaps she even saw the High Priest on the Day of Atonement emerging from his annual entry into the Holy of Holies, arrayed in all his splendour, the sun glinting from the gold plates fastened to his forehead on which was written the very name of God. Jewish writings from around the time of Christ wax very lyrical indeed about the sight of the High Priest as a manifestation of the divine glory.

The poor widow, then, knows that the hope that the temple offers her is of more value than anything she has, of as much value as the whole of her life, precisely because that hope is what gives her life value. It is the same for us: the signs of God’s presence among us, the finding of his mercy in his Church and in the saintly people we meet in every day life, are what give meaning and value to our lives.

But we are more than seekers. As Christians, we do not just play the role of the widow in this story; we also play the role of priests. Washed clean not in the water located in the Court of Priests, but in the blood of the Lamb, we too bear upon our foreheads the name which is above every name, written in that same blood. Each one of us is a priest of the heavenly temple, called to be a sign of God’s mercy, called to give hope and consolation, meaning and value to those who seek the presence of God.

There are many people today who have thrown, and continue to throw, their whole livelihood into the treasure of the new and living temple which is the Church. Of course that includes the priests and religious who have offered their lives to the service of God and his people; it also includes many, many people whose generosity with time and with money enables the work of the Church in its many aspects. But I think principally of those millions, hundreds of millions of Christians who have put their hope and trust in the Church to be the effective sign of God’s merciful presence. It is those people whose offering of that hope and trust is despoiled when the authorities within the Church act corruptly, dishonestly, hypocritically and wickedly, just as the poor widow’s generosity was mocked by the corruption and wickedness of the temple authorities in Christ’s own time.

Let us pray today that all Christians, at every level within the Church, will renew their commitment to their baptismal priesthood – a share in the priesthood of Christ Crucified. Let us pledge that those who have offered themselves in service of the Church and those who turn to the Church in hope and trust will meet faces marked not by scorn, contempt and cruelty but by that perfect love which the poor widow might have seen in the face of Christ.

Photograph by Fr Lawrence Lew OP of the ‘Holy Face of Christ the Redeemer’ in the basilica of Santa Maria Sopra Minerva in Rome. The work is attributed to Perugino or Pinturicchio.

Categories:
32nd Sunday of the Year