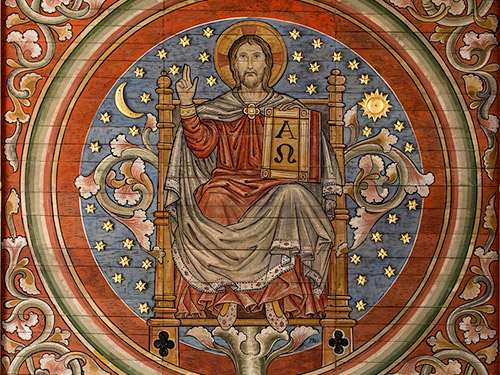 Subjects of Christ the King?

Solemnity of Christ the King. fr Peter Clarke reflects upon how Christ’s Kingship is founded in humility.

“The King of Glory comes, the nation rejoices…;”
“All glory, laud and honour, To Thee, Redeemer, King”
“Crown Him with many crowns, the Lamb upon His throne.”

We Christians have a cornucopia of hymns in celebration of the Solemnity of Christ the King. And rightly so! He has earned all the honour, praise, and thanks we can give Him.

Shortly before His Passion Jesus exclaimed with joy, “In the world you will have hardship, but be courageous: I have conquered the world!” (Jn. 6. 33). This is the language well-suited to a King reassuring His followers that He’s so confident that already He has triumphed!

St. Paul, defining the nature of Christ’s conquest write, “Christ emptied himself, taking the form of a slave, becoming as human beings are; and being in every way like a human being, He was humbler yet, even to accepting death, death on a cross. And for this God raised Him high, and gave Him the name which is above all other names; so that all beings in the heavens, on earth and in the underworld, should bend the knee at the name of Jesus,” (Philippians 2).

However, Jesus Himself would have us know that words of respect, honour and praise trip effortlessly from tongues and fall lightly upon ears. Did He not say, “It is not anyone who says to me, “Lord, Lord,” who will enter the kingdom of Heaven, but the person who does the will of my Father in heaven?” (Mtt.7.21).

At the Last Supper Jesus made it very clear that accepting Him as Lord, King, or Master was serious business – far, far more than following the conventions of courtesy and respect, “ You call me Master and Lord, and rightly; so I am. If I, then, the Lord and Master, have washed your feet, you must wash each other’s feet. I have given you an example so that you may copy what I have done to you. ‘In all truth I tell you, no servant is greater than his master, no messenger is greater than the one who sent him. ‘Now that you know this, blessed are you if you behave accordingly,” (Jn.13.13).

Shall we be blessed, happy in accepting the leadership of Jesus as His disciples, His followers – in being at the service of others – even in washing their smelly feet? I wonder! Living under the Lordship of Jesus whom we acclaim as our King must surely mean placing ourselves utterly at the disposal of His/our Heavenly Father as in, “‘My Father,’ He said, ‘if it is possible, let this cup pass me by. Nevertheless, let it be as you, not I, would have it,” (Mtt.26.39).

Could it be that the source of so much discontent and disappointment with life is that we are inclined to worship at the altars of self-fulfilment and job satisfaction? The grass on our side of the fence is never green enough for our liking! The pastures to which Jesus our Shepherd-King would lead us are not to our taste!

And yet Jesus as King summons me, you, all of us, to play our part in His great enterprise, as described in the Preface to the Solemnity of Christ the King, that “He might accomplish the mysteries of human redemption and, making all created things subject to His rule, He might present to the immensity of the majesty of His Heavenly Father an eternal and universal kingdom, a kingdom of truth and life, a kingdom of holiness and grace, a kingdom of justice, love and peace.”

Truth, life, holiness, grace, justice, love and peace are ‘Kingdom Values’ that we must surely admire and want to see imbedded in our society. We may be willing to do something to bringing this about. But, and it’s a big ‘BUT,’ our own personal living under the Kingship of Christ must mean that these very same values shape and transform our own lives.

I think of the times when I’ve been more than somewhat self-willed, self-centred. Neither for you nor for me is that what living under the Kingship of Christ is all about!

Fr Peter Clarke worked for many years in the English Province's mission in the West Indies. May he rest in peace.