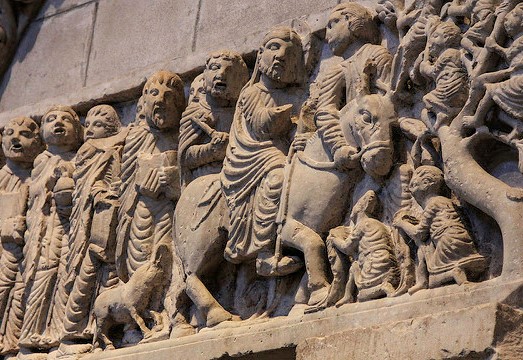 The Blood That Has Been Shed

Palm Sunday. Fr Aidan Nichols reflects on how we are saved through the blood of Jesus Christ.

The vestments of the celebrants today are blood-red, because at the beginning of Holy Week we anticipate the week’s end. The One who enters Jerusalem today is already, in the words of Keats, a ‘murdered man’. There was no earthly hope for him since his enemies had made up their minds: judicial murder would be his end. And for the judicial murder the instrument at hand would not be a clean or antiseptic one like the electric chair is at any rate supposed to be. The preference of the Roman authorities for crucifixion was even more sanguineous than the Jewish method of stoning. And so it’s blood we’re thinking of already. Soon the red liquid will be flowing. You may say, so what? There’s so much blood shed in the world: in road accidents, murders, natural disasters, political atrocities. Yes, but this blood is different.

This is redemptive blood. It is the blood Marlowe’s Faust saw streaming through the firmament, and St Catherine of Siena perceived as soaking the Church in its flow. It is royal blood, the blood of the Messiah, to be shed in a self-giving whose effects are so wonderful that this Sacrifice is a triumph, and not a defeat. This is the life-blood offered up to the Father as the vehicle for atoning love which meets, and more than meets, the demand of the infinitely Holy One for redress for evil. It ‘more than meets’ that demand since it makes the human race not only atoned for but endlessly glorious. The red we wear today is not just the red of blood. It is also the red of regal triumph.

The place where it all happened matters. The location is not without significance – not by any manner of means. Today the Lord sought to enter his own city, Zion, the holy city. It was the city of the Most High God, where, for the ancient Hebrews, he had placed his Name. In other words, it was the city whose vocation was to be the dwelling-place on earth of the truth, goodness, and beauty of the Divinity Israel worshipped. It was a city that belonged to Jesus Christ by right – not only owing to the fact that he was Israel’s true Messiah , but because of the way in which he was so: a way unthought of even by the most farseeing of the prophets: he was incarnate God and so in his divine-human person he is the measure of all truth, all goodness, all beauty whatsoever. The relationship between God and the world finds its highest embodiment in his person.

But the entry into the city was ill-omened, and that the Old Testament did understand, Scripture knew of cities that kept their gates firmly closed, to their loss. Jericho closed its doors against Joshua and ensured it would miss out on the creative moment of divine history sweeping up through the fertile Crescent with the tribes of Israel escaping from Egypt. Despite this morning’s hosannas, later this week Jerusalem will close its doors on Jesus. It will not simply bar him, as Jericho barred Joshua. It will have him crucified outside the gate. That is the point Mrs Alexander is making in the children’s hymn, ‘There is a green hill far away,/ Without a city wall’. It is not intended as a bucolic image of a pretty landscape. It is an expression in language suited to children of closure on the offer of salvation.

We know parallels to such closure in our own lives. We can close the door of our personality, snap it shut, when to open it would have meant healing for ourselves and others. On Good Friday the Saviour will do the opposite to what Jericho and Jerusalem did. He will open his arms as wide as they can go, so that all the world may march in through the fissure in his side, into the spacious welcome of his Sacred Heart. This is where so many of the mystical saints of the Latin Church have sought to locate themselves, and if we find the language rather gruesome we should think again. Its message runs, to cite another modern (well, fairly modern) hymn, ‘There is plentiful redemption/ In the blood that has been shed;/ There is joy for all the members/ In the sorrows of the Head’.

Torch is a free service and available to all. Each homily requires thought and research, and takes up to half a day to write. Could you help support the Dominican Friars who give their time in this way? A gift of £25 – £50 would greatly help to cover the day-to-day costs of the brothers.

If you would like to help, you can donate online now.
You can make a single one-off gift, or set up regular giving.