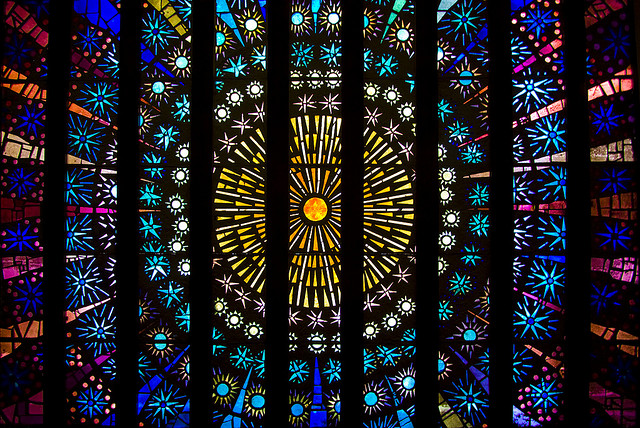 The Cosmic Christ Frees Us to Wait for His Birth

First Sunday of Advent. fr David Sanders reflects on our belief in the second coming Jesus Christ, the King of Creation.

Some towns in England now have a Christmas winter light festival which may last eight weeks from November till January. The town councils promise it will be full of fun and celebration. It is a secular attempt to bring some light in the middle of winter darkness and to celebrate the endless natural cycle of death and rebirth. But add to this the other annual cycle of Christmas shopping which encourages a great deal of buying and spending and you might well feel you are caught on a great treadmill of endless fun and consumption. Adverts encourage us to have satisfaction now. There is no waiting in the wanting. They are called Christmas celebrations but they are very different from the way the Church asks us to prepare for the celebration of Christmas with the liturgy of the four weeks of Advent.

Advent is a break in the liturgical cycle. The colours change. We put on purple. It is a new year. We prepare for the birth of Jesu at Christmas by waiting. Like a pregnancy the time of waiting is important. We relive that time of waiting for the messiah which the Old Testament records. His birth is not just to be part of the endless natural cycle of death and rebirth. Jesus will break out of this cycle and offer us a saving freedom. But to appreciate this we have to be patient and get the right perspective on him.

And that’s why today on the first Sunday of Advent the Church insists that the Jesus who came at the first Christmas is also the one who will come in majesty at the end of the world. We look at the past but in the light of the future. By the time Luke wrote this gospel the temple whose destruction Jesus predicted had fallen. Now today Jesus looks to the future and foretells the end of the world. The story which began at creation will come to a climax. It is not just an endless cycle. The Christ who comes at Christmas is the universal king of creation whom we celebrated last Sunday.

Christ is not just a personal saviour, he is the cosmic Christ who will brings God’s purpose for his creation to fulfilment. It is not just my personal end in death which is central today but the end of the world. And to describe this we need the language of apocalyptic. For some this is strange weird language and yet it is the only language which we can use to describe the apocalyptic world we live in. What sort of world is it? It is a world of atomic destruction and global meltdown, a world of terrorist massacres and extermination camps. It is a world which brings fear and anxiety. Or as the gospel says it is a world ‘of men dying of fear as they await what menaces the world, for the powers of heaven are shaken’

Who can save this world? The God who created it, who created the sun, the moon and the starts and who has the power to shake again these heavenly elements. This apocalyptic language is not to be taken literally but rather it symbolises God’s control over his universe. And now just as Christ predicted the end of the temple so he predicts the endless cycle of the world will be broken when the Son of Man comes in a cloud of power and great glory to establish a new creation.

So the end of the world is not a time to cower in fear, Jesus tells his disciples, but rather a time to stand erect, with heads held high because now their liberation is near at hand. This is the perspective with which we begin Advent. We wait and long for the birth of Jesus at Bethlehem again but in the hope of his second glorious coming.

And that hope gives us the confidence to break free from the stifling atmosphere of false premature celebrations of Christmas which try to satisfy us too easily. In early times advent was a season of fasting but now it is one of feasting so that by Christmas we are dying to fast.

So Jesus tells us to learn patience and waiting. Don’t be coarsened by indulgent shopping and too many office parties. Advent is a beautiful season full of the riches of scripture and the liturgy. Stay awake, be attentive in prayer and enjoy the silence which can only be filled by Christ. Advent prepares us to appreciate the child born in the manger who will give his life for us on the cross. With confidence in his cosmic saving power we can face an apocalyptic world with hope.