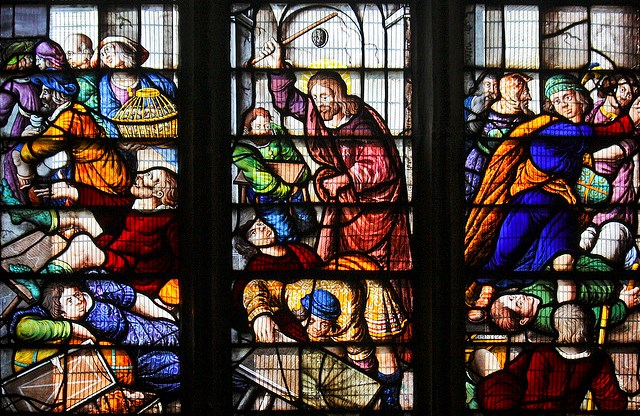 The Hope that Does not Shame.

Third Sunday of Lent. fr Euan helps us to see the nature of Christian hope.

Every week in churches throughout the world, baskets of money will be carried up the aisle and presented to the priest who presides at mass. There are many variations in the way this is done but anyone who was completely ignorant of Christianity might think that money was pretty central to Christian worship, and I think in some churches it probably is. Yet in today’s Gospel, Jesus overturns the money changers tables, and throws them out. Has something gone badly wrong with our liturgy? I don’t think it has. There is a difference between the offertory procession and the actions of the money changers, but it a subtle one. In the early Church, it would be easier to see the difference since the offertory procession would mean bringing up bread and wine for the Eucharist made in the homes of the people, and food for the poor. It would also include money and here we should be clear. There are plenty of verses which clearly look on money with a baneful eye. For the love of money is a root of all kinds of evil, and in their eagerness to be rich some have wandered away from the faith and pierced themselves with many pains. (1Timothy 6:10 NRS)  If then you have not been faithful with the dishonest wealth, who will entrust to you the true riches? (Luke 16:11 NRS). Judas betrays Jesus for money, I mean Judas in the bible, not Jesus Christ Superstar, or any of the works of fiction that try to convince us of the essential nobility of his betrayal. Still the fact that these works are uncomfortable with Judas having so banal a motive as a desire for money, shows that we all have an uneasiness about money.

Desiring money for its own sake is wrong for a reason which might sound wrong to Christian ears. Seeking money for its own sake is wrong because it is acting out of hope. To explain that I have to invoke a distinction made by St Thomas Aquinas between the passion, that is emotion, of hope and the virtue of hope. A virtue is for Thomas a quality which no one can use badly and hope is only the virtue of Hope, when it is based on God and God alone. This is why Hope is a theological virtue. It centres on God. This is the hope which St Paul is speaking about which does not cause shame. This word is sometimes translated as disappoint or confound, because St Paul is thinking of the language of the Old Testament where the enemies of Israel are shamed when they fail to destroy Israel.

Hope without God as its object is merely an emotion, and it is a very destructive emotion. It is this emotional hope which makes people preoccupied with money for its own sake, which makes them compulsive gamblers, which makes them always look for a new partner, who will bring them happiness. The keynote of this hope is to look not at what we have but what we don’t have. Happiness is always around the corner, but there is always another corner. So Christ clears the temple of those who have lost sight even of the hope offered by the old covenant. They were in the temple of God and they were thinking of everything except God. In effect they weren’t really in the temple.

Christian hope is found in trusting in what we have now. Christian hope lives in the moment, because the moment comes from God. So Christians take vows which seem to limit our options but in fact tie us to what God is asking and offering to us now. We are always in the right place, for the right reason, if we live in hope.

Hope is the virtue which enables us to touch God in our lives. It is the wisdom of the Cross, and the cross is the fulfillment of hope. If even the moment when Christ died, the darkest of all moments was in accordance with divine wisdom, why should we doubt that every other moment can be in accordance with his wisdom?