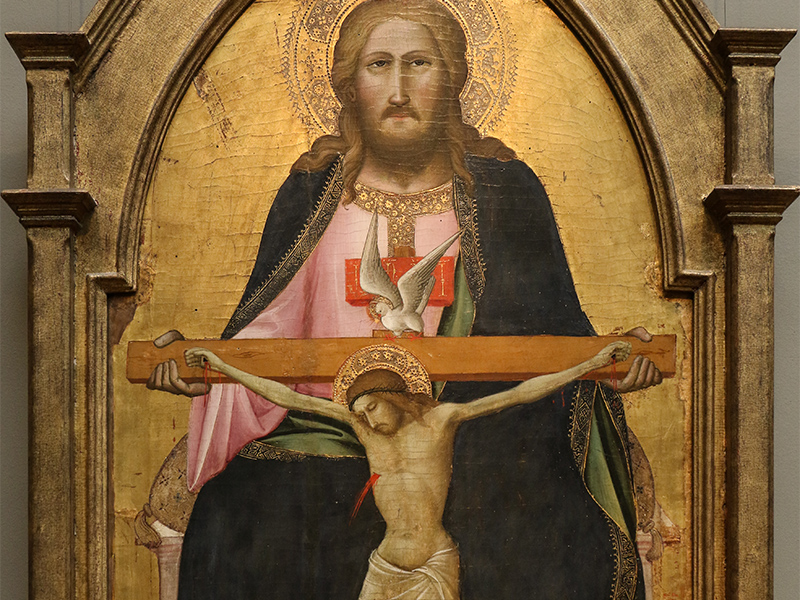 Solemnity of the Most Holy Trinity (A)  |  Fr John Patrick Kenrick contemplates the mysteriousness of God, who befriends humanity and draws us close to himself.

Progress in thinking about God has always gone hand in hand with moral progress.  In fact they cannot really be divorced from each other.  Only a clear conscience enjoys that liberty to glimpse higher truths.   We know this from the lives of our saints.  The commandments given to Moses were not only progress in moral thinking, they were also revealing more of who God is.

Moses describes the chosen people as ‘headstrong’.  I’m not sure they were any more headstrong than anyone else.   There is a rebellious spirit evident in us from childhood, from the age at which children are becoming independent thinkers.  The very thing that makes us reasonably challenge what we are told and which can therefore lead to progress can also at times manifest itself in a negative way, as an unreasonable rejection of all authority.

The Israelites in the wilderness were tempted to worship a molten idol which they could see and touch.  Christians have sometimes been tempted to downplay the teaching that God is Trinity because it is much less demanding to create our own idea or picture of God and worship that.  The truth about God always casts light on our own dignity and value.  It is not surprising that some ancient civilizations who did not have the benefit of true belief also had a distorted view of human value, evident for example in the practice of human sacrifice.  The Old Testament from the start engages with this darkened human conscience.

The faith of Israel laid the foundation of a truly humane morality and it did this because of the conviction of the Israelites that the one true God was utterly removed from the bloodthirsty monstrous beings that were revered elsewhere.  More than that, there was a sense that this God was mysterious and yet intimate, morally demanding and yet tender and fatherly.

We see this in the extraordinary encounter between God and Moses – it is only when the Lord has described himself as a God of tenderness and compassion that Moses has the confidence to ask God to adopt his people and forgive them their sins.  The revelation of God’s compassion directly affects our ability to relate to Him.

That dialogue between God and humanity which liberates humanity into an ever clearer understanding of our fundamental dignity reaches its most perfect expression in the life of Jesus, the Word made flesh.  But that moment in human history is also transformative in a new way.   As today’s gospel tells us, God has sent his son to save us from the dire effects of that rebellious spirit and to offer those who believe in him nothing less than life eternal – an eternity of loving friendship with the Lord of all.

As St Paul reminds us in the brief second reading, the community that was born in the disciples who responded to the Son of God became increasingly aware that God calls us to moral perfection and that this perfection is completely attainable if we are open to God’s Spirit.   St Paul instructs the Corinthians to greet each other ‘with the holy kiss’ but his own greeting to them must necessarily take the form of an expressed desire.   He expresses it thus: ‘the grace of the Lord Jesus, the love of God (presumably the Father’s love) and the fellowship of the Holy Spirit be with you all.   These are three expressions of one and the same love that binds all creation into a loving communion with the Father through His Son and in His Spirit, a God who is both present to us but whose inner life remains mysterious.

The rebellious human mind will find any excuse to reject the whole idea of a supreme being.  That is why it is only in the Church, the community of those who are being perfected in love that there can be any hope of avoiding misleading or confused statements about the relationships between Father, Son and Holy Spirit.

God must remain a mystery to our minds – or we have made some serious blunder in our thinking.  But the point of life is not to understand the ineffable but to be docile to the divine plan and drawn into that intimate communion which is the life of the Trinity.

Photograph by Fr Lawrence Lew OP of Agnolo Gaddi’s depiction of the Blessed Trinity. The painting dates to 1396 and it is housed in the Metropolitan Museum of Art in New York.