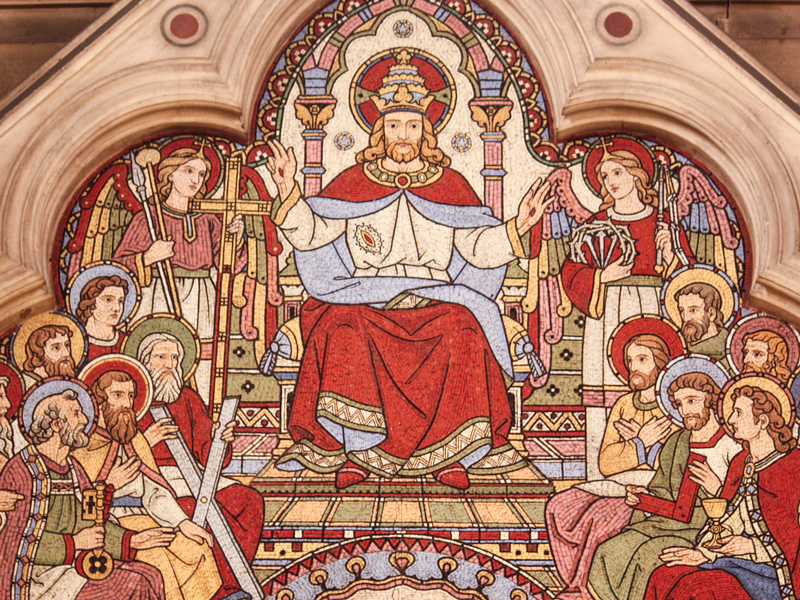 The Majesty of Christ Crucified

Thinking of this Sunday’s gospel reading, that of the Final Judgement, and of the Gospel readings for the Solemnity of Christ the Universal King on other years, I was reminded of a scene from Victor Hugo’s novel, Les Misérables, in which Jean Valjean, the principal character of the book, encounters the saintly bishop of Digne.

The broad outline of the story will be familiar to many. Jean Valjean is a man imprisoned for four years merely for stealing bread; but because of other circumstances he ends up in prison for much longer. Released at last, he cannot get a room because his papers indicate that he has been a prisoner. But the saintly Bishop of Digne gives him food and a bed for the night. Instead of treating him with suspicion, the bishop gets his sister to take out the special silver cutlery because they have a guest. After the evening meal they all go to bed. Jean Valjean gets up early, steals the cutlery, and departs.

The next day Jean Valjean is picked up by the police, who find the silverware in his bag and rightly presume that he has stolen it. So they bring him back to the bishop. Instead of confirming the suspicions of the police, the bishop, to Jean Valjean’s great surprise, responds with: “So here you are! I’m delighted to see you. Had you forgotten that I gave the candlesticks as well? They are also silver.” And he hands over the candlesticks to Jean Valjean, who is then released.

But before Jean Valjean goes on his way, the bishop manages to say to him:  “You no longer belong to what is evil but to what is good. I have bought your soul to save it from harsh thoughts and the spirit of damnation, and I give it to God.” The bishop is no fool. He sees someone who is damaged, hardened, desensitised, even dangerous. But the bishop does whatever he can to bring this man back to God. A man who was used to being treated with brutality, was now treated with love. And this changed him.

I think that most of us would agree that there is, in a certain sense, a profound majesty in what the bishop did. Yes, the word ‘majesty’ is often applied to kings and queens, to the mighty and powerful of our world. Yes, by other standards the humility of allowing a criminal to exploit hospitality and to profit at one’s expense could be understood to be very far from majesty. But the bishop exhibited a largeness of soul, a bigger perspective on things. He carried out a noble act of love and compassion, and so showed a profound majesty in helping to save a man in desperate need.

But the majesty shown by Christ pushes this sort of idea much, much further. In him we see a kind of majesty that goes so far that it shatters whatever preconceptions we might have of what majesty is really about. Quite simply: there is something startling, even shocking, in speaking of the majesty, of the kingship, of a man who is naked and dying, nailed to a cross in order to save us. But that is precisely what Christians do.

To reflect on true and false, deep and shallow, understandings of majesty is appropriate for all times. Indeed, the Solemnity of Christ the Universal King was instituted by Pope Pius XI as a feast of the universal Church in 1925, when the dark clouds of totalitarianism were rolling over Europe. This was a time when false and shallow conceptions of majesty, based on domination and eschewing love, seemed to have the upper hand.

In the face of similar troubles, the Solemnity of the Christ the Universal King is a call to us to see our world by the light of Christ. This is a light in which the “majesty” of the potentates, the demagogues and the despots, looks like a pale and paltry imitation of the true and lasting majesty founded on love. But this Solemnity is also a call to hope, that regardless of what the tides of history might bring, the love of God will ultimately prove victorious: that at the end of the ages Christ the Universal King will come to judge the nations and he will do so in true majesty as the one who wore a crown of thorns.