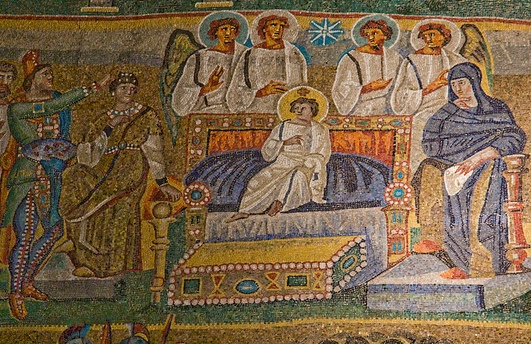 Who is the Greatest?

Twenty-Fifth Sunday of the Year. fr Dermot Morrin explains how Jesus turns our notions of status upside down.

“Who is the greatest?” This question might seem childish to us, but for those who first followed Jesus it was a very real question. We probably cannot fully grasp how deeply status was ingrained in the cultures from which the gospels come to us. Your standing affected how you lived your life from day to day, how you related to other people and they to you. Working out the appropriate honour and respect due to an individual was a constant task whether in worship, or in discussions, or in eating family meals, or receiving guests, or seating them, or greeting people in public and so on. The disciples were no different to anyone else in asking such a question. The real difference comes with what Jesus has to say on the subject.

It is understandable that at this point in the narrative the issue has arisen. Shortly, before Jesus had singled out three of them, Peter and James and John, and led up a mountain to witness his transfiguration and not long afterwards the brothers James and John asked to sit on his right and his left in his glory.

In this passage Jesus and his disciples are back in Galilee. In the earlier chapters, Mark describes how Jesus went through Galilee teaching, healing and casting out demons. The crowds followed him everywhere he went. There were so many people coming and going that sometimes they had no leisure even to eat (6.31). The crowds were amazed at the authority with which he taught them. The status of Jesus grows from that of someone unknown to that of a great prophet, teacher and healer. Now he is back in the same region and indeed in the very same town of Capernaum but this time there are no crowds because nobody knows that he is there. Mark says that this is because he is teaching his disciples. Mark singles out his teaching that “the Son of man will be delivered into the hands of men, and they will kill him; and when he is killed, after three days he will rise.” (9.31) The way Jesus puts it, there is no question of it not being true. It will happen. Moreover, Jesus doesn’t just say it once. He goes on saying it to them. But the disciples cannot understand him. Before this on several occasions they had asked him to explain something that they didn’t understand. But now they don’t even bring up the subject. Mark tells us that they are afraid to ask.

And so Jesus speaks to them about status in his kingdom. He does this in a remarkable way. First, St Mark says that he sits down. This detail is important because it tells us that here Jesus is teaching them in a very formal way, indicating to them the importance of what he is about to say. Moreover, he calls the twelve to him. It might seem obvious that the twelve men who are named earlier as apostles should be there among his disciples but again this underlines for us that this teaching is imparted to those who will be sent to proclaim the gospel. He says, “If any one would be first, he must be last of all and servant of all.” In effect he tells them that in terms of their culture and their thinking they should seek to take the place of lowest status. Of course he himself is the first of them to so when he endures the shame and humiliation of crucifixion. Here uses the word “last”. In him, the first becomes last. Interestingly, later on, in a pointed reference to his own death, in the parable of the wicked tenants in the vineyard (12. 1-12), he will this same word again. When Jesus says how the man sends his son to the wicked tenants, the same word is used to mean that the son was all that the man had left. But of course, it is the son who has first place in his heart that the son is all that he has left. Again the first becomes last mirroring the destiny of the Son of God.

And then Jesus uses the example of a child. We can speculate about the meaning of a later saying of Jesus that it is to such as children that the kingdom of God belongs (10.14) but in this passage the key point about the child is that in that time and place a child had absolutely no status whatsoever. A child was totally dependent on others and in this sense powerless. If you wanted to select a person of the least importance then a child was a good choice. Jesus puts the unimportant child in the centre of the room. He gives the child the most important place and then takes the child in his arms. The one of no status is given the position of greatest honour. The last is placed first. It is in receiving such a person notwithstanding his or her total lack of standing or status or importance, that a follower of Christ will receive God the Father. Jesus turns their whole way of looking at themselves and others completely upside down.

If you were to list those in our world to whom effectively we accord no status it would be a very long list. This gospel passage asks of us that we begin to rethink our attitude to many people, and it should lead us to ponder all the more deeply what Jesus is doing when he becomes last of all and servant of all on the cross.