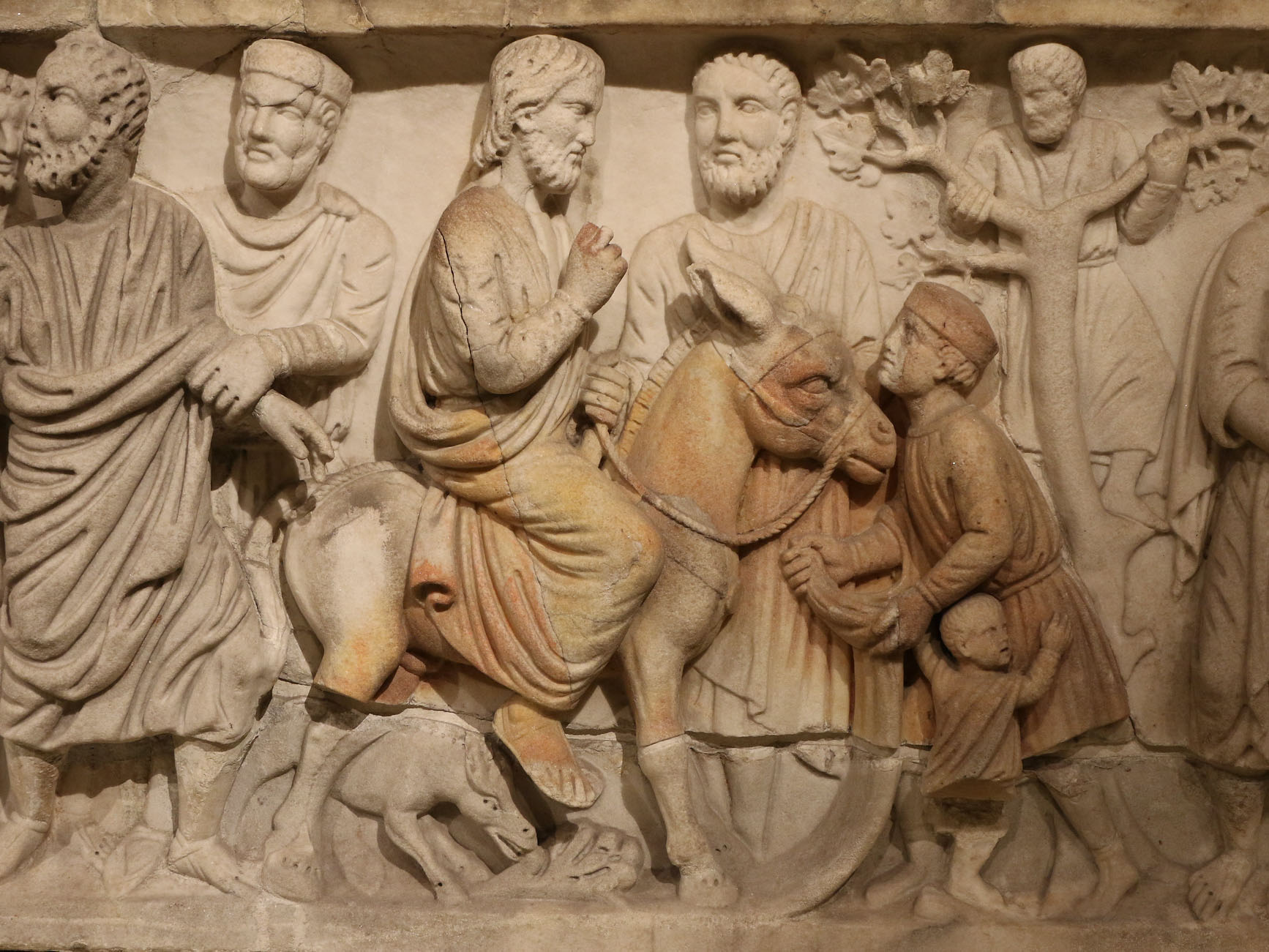 Palm Sunday of the Lord’s Passion (A)  |  Fr Fergus Kerr invites us to rediscover the identity of Jesus as the drama of Holy Week unfolds once more, not only in our churches, but also in our homes and in our hearts.

‘Who is this?’ people asked, as Jesus, riding on an ass, with a crowd of supporters, arrived in Jerusalem, creating something of a stir (Matthew 21: 10), on the first day of what we know as Holy Week.

It’s the question of his identity. On this occasion it wasn’t prompted by anything that he said. It was what he did — riding into town on an ass. He was accompanied by excited, even elated followers, some spreading their clothes along the way, like rolling out the red carpet, while others were strewing the road with branches from the trees — hence the palms — it was standard practice at the time to lay down leaves and flowers on the street for a victory parade.  They were shouting — ‘Hosanna for the son of David, blessed is he who comes in the name of the Lord’.  To that extent they knew who he was.

In many different cultures both ancient and modern people love parades and processions, especially if figures of great authority are on show. For our part, in Britain, consider the crowds in the Mall cheering the Queen in her horse-drawn carriage as she makes her way along to some State event.   Or think of the President of the United States in a motorcade of some 45 vehicles, — a mesmerizing demonstration of power.

The symbolism of riding on an ass does not escape Matthew (21: 4-5).  Weaving together quotations from Isaiah and Zechariah he explains that by choosing a she-ass to carry him into the holy city Jesus was fulfilling an age-old prophecy, signalling to the people — ‘the daughter of Sion’ — that their king had come — ‘humbly’. Like people everywhere, they had seen enough of powerful kings in the rulers of Babylon and now, under Roman occupation, they had troops clattering through the streets in their chariots.   They might recall stories of the legendary Alexander the Great’s entrance into Jerusalem in 332 BC riding arrogantly high on his magnificent warhorse.

In contrast, as if mocking it, Jesus turns it upside down. No king in those days, no Roman imperial authority figure, no country’s leader in our time either, would ever appear so absurdly on the back of an ass. It’s almost a joke — not organized enough to count even as a protest march. If this is Jesus finally beginning to reveal his identity then isn’t he doing so by parodying everything that would naturally exhibit leadership, power and authority?

Back then in the Roman Empire, but of course not only there, authority was despotic, autocratic and dictatorial — imperious, coercive — domineering, to list some likely descriptions.  Indeed, leadership is not to be domineering as it is among the pagans, as Jesus once said to his disciples (Matthew 20: 26).  He has an entirely different way of exercising authority — non-violent, persuasive, peaceful.

That was of course true.  Yet it doesn’t explain why he comes riding on an ass — to explain that, as Matthew notes, we need the four or five hundred year old prophecies about the king who comes humbly. But this is Palm Sunday of the Passion. We go on to listen to the Passion according to Saint Matthew and as we do so, we are drawn more deeply and explicitly into the identity of the central figure. The Roman centurion and his men cry out in awe : ‘ Truly this man was a son of God’ (27: 54). Or  ‘the Son of God’?  What could these pagan soldiers really have meant? And then what about the women — the ‘many women’; women ‘who had followed Jesus from Galilee and ministered to him’, the women who now ‘watched at a distance’ — “Among them were Mary of Magdala, Mary the mother of James and Joseph, and the mother of the sons of Zebedee” (27: 56) — what were they thinking?

It’s only the first day of Holy Week. Much else will be remembered and revealed.  Palm Sunday is the start, where we are called by the Church to begin. ‘Christ is risen’ we shall tell one another when Easter Day comes;  but our reaffirmation of who he is begins with the followers who so joyfully strewed his path with palm branches, believing him to be the long awaited king of peace, and with the Roman soldiers in their awe, whatever they meant by what they said; and finally the women, saying nothing that has been recorded, — watching and waiting.

Photograph by Fr Lawrence Lew OP of a sarcophagus carved c.312, and now housed in the Metropolitan Museum of Art, NYC.