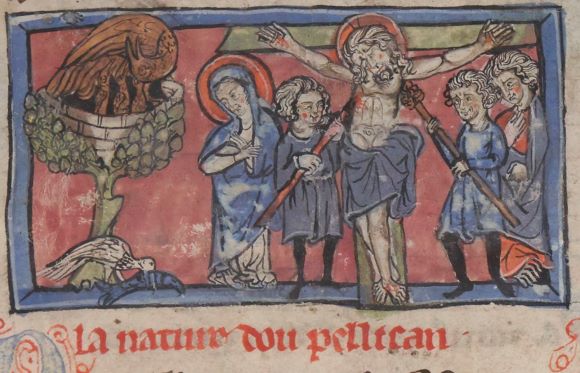 Godzdogz
Home  /  Godzdogz  /  A Meditation on the Pelican

A Meditation on the Pelican

By Vincent Loning O.P.
176
By Br Vincent Antony Löning, O.P. | The pelican is obviously a well-known Eucharistic symbol for Catholics, though not all will know why.

The pelican is obviously a well-known Eucharistic symbol for Catholics, though not all will know why. It was popularly believed in the Middle Ages that this bird, in order to feed its young, will tear out its own flesh from its breast to let its babies drink its blood—perhaps because a pelican actually feeding its young might look like that, since it uses its large beak to store pre-digested food for them. I recently learned that this medieval legend actually has a broader back-story. Some ancient sources tell us that baby pelicans, as they grow, will annoy their parents by their incessant noise and pecking. Their parents (perhaps taking their cue from Deuteronomy 21) will retaliate by killing them. Only afterwards they repent, and have to feed them with their own blood so that they may revive.
This behaviour obviously might seem a bit barbaric and less divine than we might wish. Then again, the Bible, and especially the Old Testament, does contain many examples of God resorting to extreme measures to punish his people. That does not prevent him from relenting: having a change of heart, in Biblical terms. Just think of poor Jonah and the Ninevites. If anything, the Eucharist is really such a powerful symbol, because it reminds us both of the punishment that should have really been ours, and Christ’s sacrifice to save us. I suppose God could have simply clicked his metaphorical fingers to save us. But no. He sent us his only Son, and bought us back with His blood.

The pelican has inspired countless poets, from Thomas Aquinas in his famous Pie Pelicane, to the French writer Musset in his Sacrifice du Poète. We also find the pelican in Scripture. As it’s Lent, it’s probably fitting to have a look at Psalm 101 (102), one of the penitential psalms. “O Lord, hear my prayer, and let my cry come unto thee…” It’s the sort of psalm that Christ could well have been praying from the Cross, along there with “My God, my God, why have you forsaken me?” (Ps. 21). A few verses on, there we have it: Similis factus sum pellicano in solitudine, I have become like a pelican in the wilderness (Ps. 101.7). The psalmist also compares himself to an owl, and a lonely bird. Birds are not by nature solitary creatures. They fly and sing in flocks, they mate and nest together. But this pelican is utterly abandoned, and sings a song of lament.

As we get towards the end of this psalm, we are reminded that all things pass away, but only God endures forever, and remains completely without change. In his humanity, Christ embraces us, but also our ability to change, with the corruption and decay that come from it. Even when he “hides” himself in the Eucharistic species, he takes on the appearance of bread and wine which are very truly corruptible—that’s why we have to sometimes empty and replenish the tabernacle! And at the same time, he has shared with us the incorruptibility which his glorified body enjoys in Heaven. And he shares it precisely in this corruptible appearance.

There’s perhaps a lesson for us there, too. Are we willing—like the medieval pelican—to sometimes embrace self-sacrifice, or really the appearance of sacrifice, to give to others what is truly good? Who knows, we might even benefit from the gift ourselves.