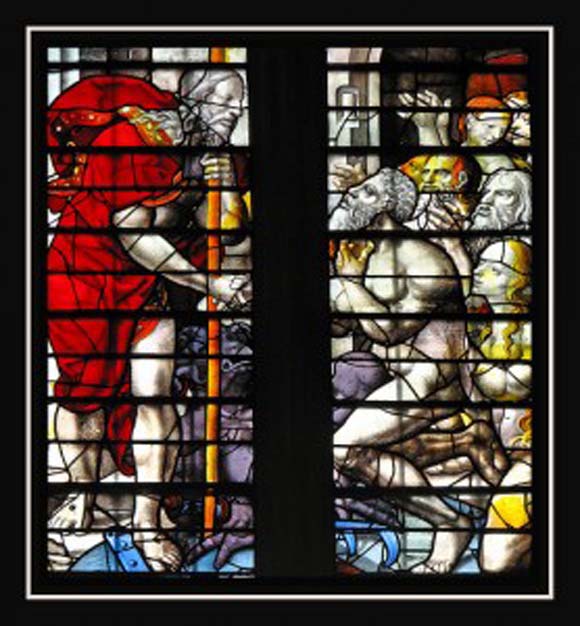 The arguments that broke out at the time of the Protestant reformation ensured that ‘justification’ became one of the best known and most controversial of Paul’s words. Justification is the usual English translation of the Greek term dikaiosune when it is applied to human beings: in what Christ has done, God has ‘justified’ us. When the same term is applied to God it is usually translated ‘righteousness’. So Paul says that ‘the righteousness (dikaiosune) of God is revealed in the gospel by faith for the purpose of faith, as it is written ‘the righteous one (ho dikaios) by faith shall live” (Romans 1:17, quoting Habbakuk 2:4). God who is just and faithful has put forward his Son as atoning sacrifice, Paul continues (Romans 3:24-26). The faithfulness of Jesus seen in the shedding of his blood reveals God’s righteousness, that God has been patient and ‘passed over former sins’. The action of God in the death and resurrection of Jesus has not only shown God to be righteous but has revealed also that those who participate in the faithfulness of Jesus are ‘justified’ and ‘made righteous’, ‘brought into right relationship’ with God.

So ‘justification’ is another in that list of terms needed to bring out the implications of what God has done in and through Jesus. Paul speaks of it as grace, salvation, redemption, reconciliation, life, freedom, sanctification, new creation, and also as justification. In Romans 5, he contrasts the consequences of Adam’s trespass (death, condemnation, judgement) with the consequences of Christ’s obedience (grace, justification, acquittal and life). In Romans 8 when speaking of the life in the Spirit made possible for those who believe in Christ he speaks of predestination, vocation, justification and glorification: ‘We know that in everything God works for good with those who love him, who are called according to his purpose. For those whom he foreknew he also predestined to be conformed to the image of his Son, in order that he might be the first-born among many brethren. And those whom he predestined he also called; and those whom he called he also justified; and those whom he justified he also glorified’ (Romans 8:28-30).

Justification is by faith, our participation in the faithfulness of Jesus. This is made possible by the gift of the Spirit, the love of God poured into our hearts who assures us that we are children of God, heirs with Christ, destined to be glorified with him if we share his sufferings (Romans 8:17). ‘For in Christ Jesus we are all children of God, through faith’ (Galatians 3:26).