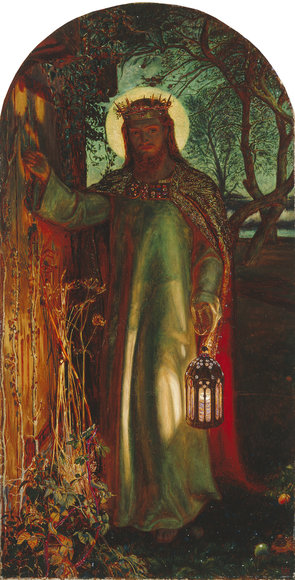 Advent Art: The Light of the World, by William Holman Hunt

By Br. Bede Mullens, O.P. |Br Bede reflects on Christ’s coming to the soul of each Christian, and on the paradoxes of Advent and Christmas.

We have heard it said, “Knock, and the door shall be opened unto you”; our prayer is a knocking at the Lord’s door, the thud of our needs and desires (our need and desire, finally, for him) crying out to him. But now he says to us, “Behold, I stand at the door and knock; if any man hear my voice, and open the door, I will come in to him, and will sup with him, and he with me.” He awaits our response; he is left in the cold and dark, who alone brings us light and warmth. This is the mystery that St John expresses when he says that love means, not the love with which we love God; it is really the love with which he loves us – God’s motion, not our own.

The shaggy, crowned and luminous figure – light and salvation – knocks at the world’s door; “but his own knew him not”. We have heard it said that God shall pass judgment on those who knock at his door too late: “I do not know you,” he shall say to them, and they shall be left in the outer darkness, where there will be weeping and gnashing of teeth. Only, now we see, it is not God who abandons them; we may be unfaithful, but he is not unfaithful. “I stand at the door and knock – and you have not answered to me. I was hungry and you gave me no food, thirsty and you gave me no drink, I was a stranger and you did not welcome me.” He came among his own, and his own received him not.

He knocks at the dead wooden door of an unyielding world. (Maybe Dickens was wrong; maybe there is something really dead about a doorknob, when it cannot, will not be turned.) And as he knocks, his eyes gaze out at us. The world’s door, our hearts. He who will come at the end of the ages, to open the doors that were closed and reveal the things that were hidden – he who comes to judge the world with fire: he comes now and every moment to each of us, to see if we will open even a chink to him the doors to our hearts, wherein he wishes to enter and make his abode. Holman Hunt painted his Christ with an emphatic solidity: this is no mythic figure, no spiritual vapour, he wrote, but “the Christ that is alive for ever more…firmly and substantially there waiting for the stirring of the sleeping soul”.

St Antony went out to the desert, to find Christ in the lairs of demons. Christ comes to our hearts, lairs of vice and demons and perverse desires – those weeds massing up in front of the door as if to block his way – to drive them out and take up his abode there. St Antony purifying his heart in the desert; Christ knocking at the hearts of each of us individually, who yet is High Priest and King of the world, the slayer of cosmic demons as well as personal vice. I want to say that we inhabit our interiority or our spirituality externally. Or that Christ inhabits our temporality timelessly.

Either way, the season stretching from Advent to Epiphany is a season of contradictions. We muddles ourselves up with Christ’s several comings: we take on the mourning cast of violet, awaiting a Saviour we know has already come to save us, awaiting judgment from one who has been our Redeemer. And following Advent we shall have the Christmas paradox: the Almighty and Infinite scaled into the crib. Epiphany caps it all. John the Baptist must baptise the one who will give Baptism its saving power, miracles begin at Cana, and the wise men have their worldly wisdom upturned.

This Advent confusion is in fact the confusion that the world necessarily inhabits, in the twilight between Christ’s definitive paschal victory, and his manifestation at the world’s end. “The night is far gone, the day is at hand,” says St Paul – very nearly, but not yet here, and we are perplexed. T. S. Eliot gives these words to one of the wise men:

“Birth or death? There was a Birth,
We had evidence and no doubt. I had seen birth and death,
But had thought they were different; this Birth was
Hard and bitter agony for us, like death, our death.
We returned to our places, these Kingdoms,
But no longer at ease here, in the old dispensation,
With an alien people clutching their gods.
I should be glad of another death.”

Other posts in the series: