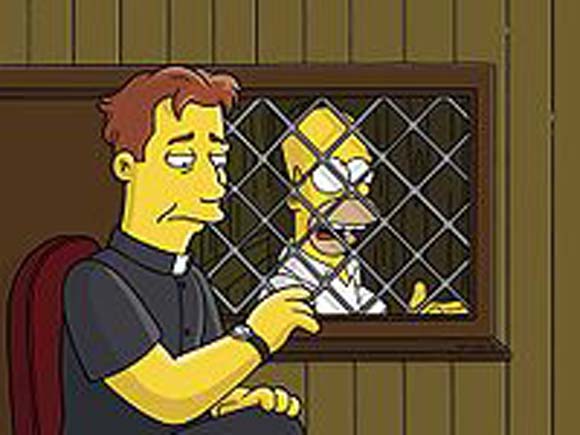 The Simpsons has been one of the most witty, entertaining and culturally significant television programmes of the last twenty years. Despite still being relatively one of the most observant and well-written series, the strain of 452 episodes, a film and countless merchandising spin-offs has resulted in a dip in standards since the golden first decade of the show. Nevertheless gems such as The Father, The Son and the Holy Guest-star, from the sixteenth series really stand out.

In this episode Bart’s shenanigans lead to him being sent to the Catholic School in Springfield, St. Jerome’s. Inspired by Father Sean, the school’s chaplain, both Bart and Homer decide to leave the Western Branch of American Reform Presbylutheranism to which they belong, and begin instruction for reception into the Church. I will not spoil the rest of the episode but apart from being side-splittingly funny it is an interesting reflection on religious intolerance and schisms within the Church.

Father Sean, voiced by Liam Neeson, in many ways is a caricature of the American priest: Irish and dedicated to his flock and Church, with a kind word in the confessional and an excellent bingo-calling voice. The character however has much to offer as a model of priesthood. He is not just concerned with keeping his flock but enlarging it by preaching the Gospel. He does this because he has a devotion to the Truth (inspired by a vision of St. Peter), Truth that is most fully realised in the Catholic Church and he wants to share this because it sets people free from sin and death.

He also lives out his priestly vocation with great dedication. One of the most obvious examples of this is seen in his service in the confessional – even after hearing confessions all afternoon he is still happy to hear Homer’s marathon confession (under the impression that he is a Catholic already). I think the most important example Father Sean can give priests is found in his presence. He is there for pupils and teachers in the school; he is there for his parishioners at bingo and pancake dinners; he is there in the confessional and at the altar; he is even there on a motorbike with a paintball gun, when Bart is kidnapped by Ned Flanders and Rev. Lovejoy to stop him making his first communion