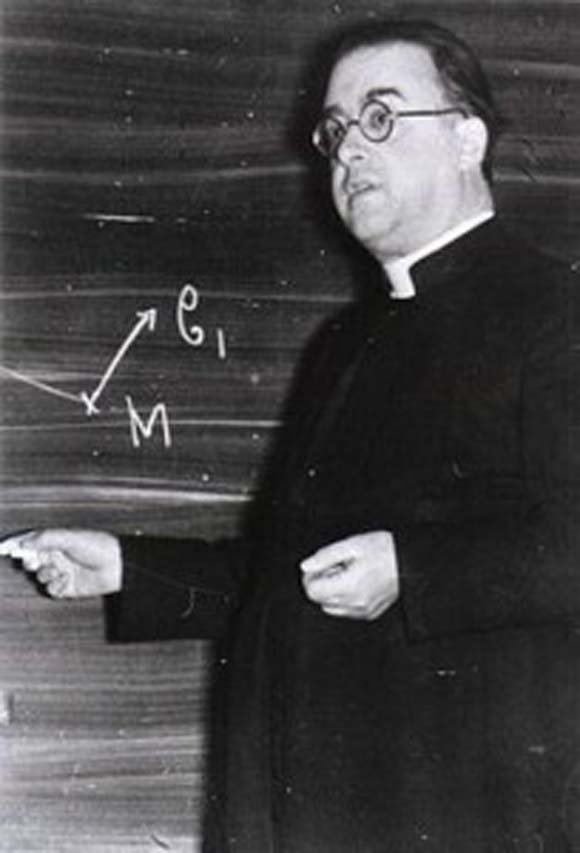 One of greatest fallacies of the “new atheists” is that modern cosmology and physics prove the mendacity of religion and therefore people of faith ignore or even attack scientific inquiry. Last September I was lucky enough to be at the University of Edinburgh Student Union’s freshers fair and came upon the secularist society’s stall. Amongst their promotional paraphernalia were badges saying “I Believe in the Big Bang”. I, of course, was very happy to take one of these badges and, to the horror of these ‘rational’ youths, put it on my habit. I think they would be further mortified if they realised that the ‘hypothesis of the primeval atom’ or the Big Bang Theory was proposed by a Belgian Catholic priest in 1933. Monsignor Georges Henri Joseph Édouard Lemaître was born in 1894 and was educated by Jesuits. At the age of 17 he entered the Catholic University of Leuven to study civil engineering. His studies were interrupted when the Kaiser invaded Belgium in 1914. The young Georges enlisted as an artillery officer in the Belgian army and served throughout the great war with distinction, being awarded the Croix de Guerre with palms.
After the War Georges focused his energies on his study of mathematics and physics. Whilst writing his doctorate, he realised that he was being called by God to be a priest. He began his studies for the priesthood and was ordained in 1923. His superiors encouraged his obvious scientific talents and sent him to study astronomy at the University of Cambridge, where he spent a year at St Edmund’s House (now St Edmund’s College, which happens to be next door to the Dominican Priory in Cambridge). He returned to Leuven to lecture in 1925 and two years later gained international fame through presenting the new idea of an expanding universe. This challenged the established finite-size static universe model proposed by Einstein. Einstein refuted Lemaître’s theory, saying “your math is correct, but your physics is abominable” 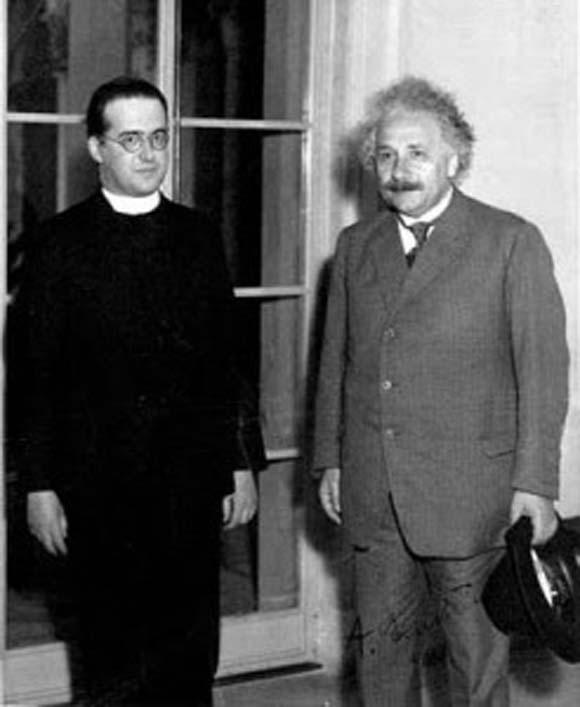 Nevertheless the work of this cleric was attracting interest and in 1930 he was invited to the British Association in London, where he expanded his theory. He proposed that the Universe expanded from an initial point, which he called the “Primeval Atom”. Lemaître described his theory as “the Cosmic Egg exploding at the moment of the creation”; it became better known as the “Big Bang theory”, a phrase originally used sarcastically.
This proposal met skepticism from his fellow scientists at the time. Eddington found Lemaître’s notion unpleasant. Einstein found it suspect because he deemed it unjustifiable from a physical point of view. On the other hand, Einstein encouraged Lemaître to look into the possibility of models of non-isotropic expansion, so it’s clear he was not altogether dismissive of the concept. He also appreciated Lemaître’s argument that a static, Einsteinian model of the universe could not be sustained indefinitely into the past. Between 1930 and 1933 Lemaître developed and debated his findings. New investigations into cosmic rays and changes within the cosmological consensus resulted in the Belgian priest being vindicated, with Einstein declaring his theory to be “the most beautiful and satisfactory explanation of creation to which I have ever listened.”

Georges Lemaître died in 1966, highly regarded and honoured as a scientist. He is an example of how reason and revelation complement and enrich each other in the honest pursuit of truth. As a priest he demonstrated the importance of engaging with the world and secular society. Who knows how many scientists and students kept or found their faith through his example?