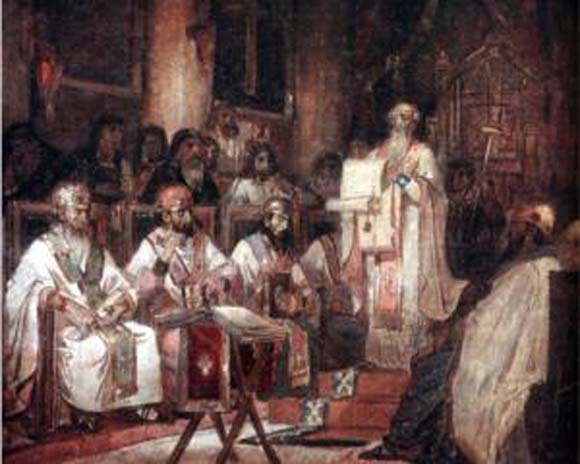 
In our previous article on Faith Councils we read of the famous Council of Chalcedon which issued the ‘Chalcedonian Definition’, repudiating the notion of a single nature in Christ, and defining that he has two natures in one person or hypostasis; it also insisted on the completeness of his two natures, that is Godhead and manhood. However, the result of this definition was not peace and concord; the reality was a major schism and another century of theological and political wrangling.

In 553AD the Second Council of Constantinople, or Fifth Ecumenical Council, was convoked by the Byzantine Emperor Justinian I under the presidency of Patriarch Eutychius of Constantinople. The main purpose of the Council was to uphold that promulgated by Chalcedon and to reconcile the Monophysites with the Orthodox. The Monophysites were significant in number and held to a belief that Jesus Christ, the Incarnation of the Word, had only a single nature, that of the divine or a synthesis between human and divine. They in turn feared that the definition of Chalcedon, and thus the direction of the Church, was not sufficiently opposed to the heresy of Nestorius (c.381-451), a former Bishop of Constantinople. Nestorianism, although condemned as heresy, was a significant current in the Church at this time and was centred strongly on the belief against any ‘mixing’ of the human and divine natures in Christ. In distinguishing so strongly between the human and divine the Nestorians could not accept the unity of natures in the person of Christ. The Nestorians also believed that the Virgin Mary could not be called the Mother of God , in Greek theotokos, but only the mother of Christ or Christotokos, though this had been condemned at the earlier Council of Ephesus in 431.
Justinian hoped that by outrightly condemning Nestorianism and its adherent’s, reconciliation could be brokered. This was no easy task and political infighting and even the imprisonment and virtual excommunication of the Pope, Vigilius, did not help matters run smoothly. However, following Vigilius’s release, the Council first sought to condemn the ‘Three Chapters’; these were both the person and writings of Theodore of Mopsuestia (d. 428), the attacks on Cyril of Alexandria and the First Council of Ephesus written by Theodoret of Cyrrhus (d. c. 466), and the attacks on Cyril and Ephesus by Ibas of Edessa (d. 457). All were believed to profess Nestorianism. Preceding these condemnations, ten dogmatic canons were promulgated that sought to define the Christology of Chalcedon with greater clarity. Emphasis was given to the Word as one subject of all the operations of Christ, both human and divine. The single person of Christ, the Son and second person of the Trinity, was said to emphatically possess two natures: human and divine. Furthermore, the role of the Virgin Mary as theotokos was reemphasized. “If anyone says that the holy, glorious, and ever-virgin Mary is called God-bearer by misuse of language and not truly, or by analogy, believing that only a mere man was born of her and that God the Word was not incarnate of her… let him be anathema” (Anathemas of the Second Council of Constantinople).
Despite the theological precision employed by the Council, a clarity that would provide the basis for further Christological investigation in the Byzantine period, the results of the Council were not immediately fruitful. Further Monophysite heresy would abound in the century to follow and the full reconciliation hoped for between the Chalcedonians and Non-Chalcedonians would not obtain. However, one cannot underestimate the importance of the Church facing such controversy head-on; the pursuit of unity and the Truth have never been easy.