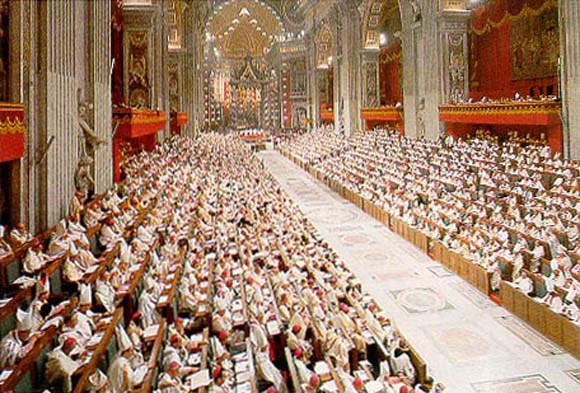 The 21st and most recent Ecumenical Council of the Church held its formal sessions in St Peter’s Basilica in the Vatican State, hence its name. It was called by John XXIII in 1959, and after preparatory work he opened it in October 1962. He died in 1963 and so the council was suspended. However, his successor Paul VI (d. 1978) immediately announced its continuation and he oversaw the rest of the council and its initial implementation.
Although some political regimes hostile to the Church, notably communist ones, prevented bishops from attending, Vatican II was by far the best attended Church Council in history. It was also truly global, with representatives of European dioceses making up a minority for the first time. The number of bishops varied between 2,100 to around 2,500: 33% from Europe; 35% from North and South America; 10% from Africa; 10% from Asia. In addition there were official theological experts (periti) and various observers, including laity and religious – women among them – and various ecumenical figures. Far from blocking or shunning the Council, the world and the media took a huge interest in the Council. 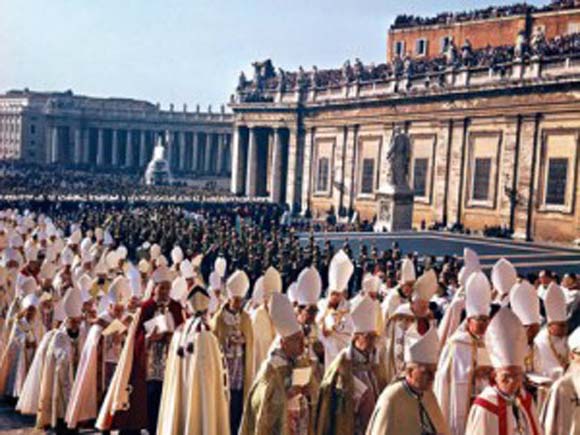 The bishops met in formal sessions between September and December (with slight variations) of the years 1962-65. While bishops went back to their diocesan and other tasks between these sessions, further consultation and drafting work was done by various commissions established by the Council in the intervening months. The Council was very productive: it produced 16 documents which it classified into 4 constitutions, 9 decrees and 3 declarations. The volume of this material makes up 25% of the total material produced and still extant from all the ecumenical councils put together, twice as much as any other council, again making it a very significant Church event indeed. Although it is sometimes called a pastoral council, and although it did not issue formal or precise anathemas (condemnations), it is a substantial teaching council, requiring serious attention and assent from the faithful.
The four constitutions provide a framework for understanding the whole council. The Constitution on Divine Revelation, Dei Verbum, addressed issues raised by the enlightenment claims that reason is the highest or even sole arbiter in matters of truth. It affirmed the supernatural nature revelation and of faith, centred on a Trinitarian understanding of Jesus Christ, whom each human is called to know and love intimately. It taught an understanding of Revelation that is mindful of how it is conditioned by history.  God came to us in historical events: his saving power is made present to us in the liturgy.  The Constitution on the Liturgy, Sacromentum Concilium, called for renewal to bring out clearly the centrality of the life and especially the Paschal Mystery of Christ, and to enable everyone to participate in it in a full, conscious, and active way. The Dogmatic Constitution of the Church, Lumen Gentium, stressed that the Church is the Body of Christ, and it set out a comprehensive understanding of the Church, to balance the unfinished work of Vatican I which was limited to the role of the papacy. In particular it developed an understanding of the role and work of the bishops, but stressed the importance of all the members of the Church. The Pastoral Constitution on the Church, Gaudium et Spes, laid out principles for the engagement of the Church with the world, and how it undertakes its mission of offering Christ’s salvation to humanity, a salvation that touches all areas of human existence, personal, social, economic and political. The other documents fill out and apply these principal teachings, providing more detail on how the Church is to renew itself and undertake its mission in the modern situation. 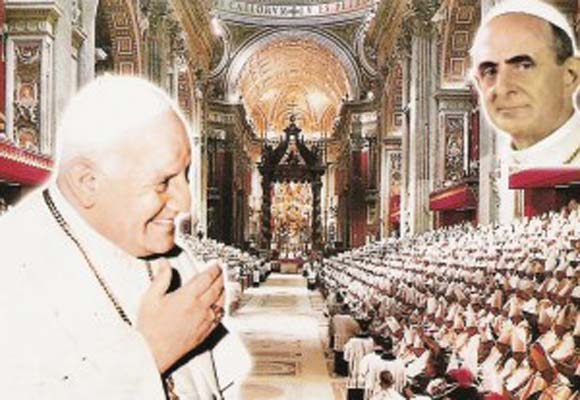 Vatican II can usefully be seen as a response to the modern condition of humanity, linked to the 18th century enlightenment. As such it continued the work of the abruptly ended Vatican I, able to draw on theological advances made in the interim period and to the further developments in the world. The world had since fought two world wars, was faced with the threat of a nuclear holocaust, was becoming an increasingly global society, less focused on Europe, and one aware of the power in technology and of the media. The Council sought to engage with the world and to see God at work outside the visible boundaries of the Church, but this engagement was not to be undertaken uncritically and far less as surrender to the world. Rather the aim was to offer eternal salvation and enable the fruits of this to be seen in the temporal sphere as well. As such, throughout its documents Vatican II issued two universal calls to all the members of the Church: a call to holiness and a call to evangelise in diverse ways. 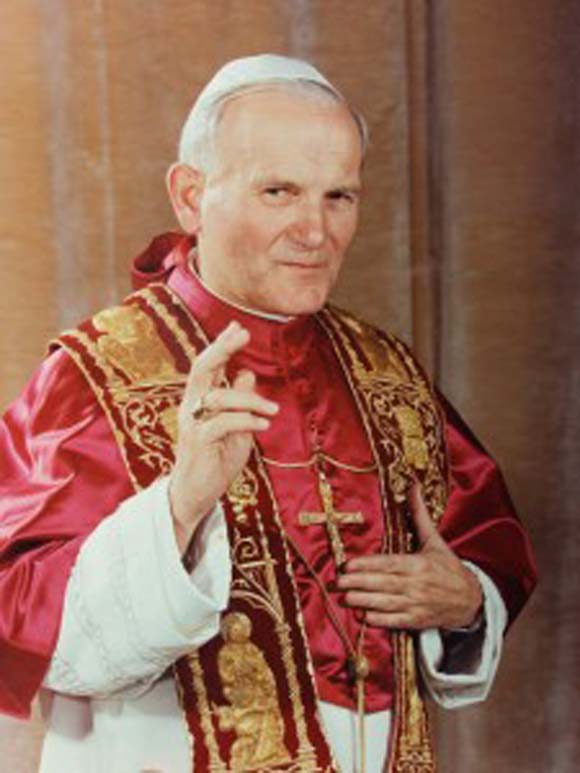 How to implement Vatican II has been the challenge of the fifty- year period since then, a period in which the world has known almost unprecedented change on a number of fronts. In some ways Vatican II gave the Church help to respond to these changes. All the popes since the council have taken a leading role in affirming and implementing the Council. Rome has issued many renewed liturgical rites, has promulgated a new Code of Canon Law (1983) and a new Universal Catechism (1992). All of these have had huge and ongoing influence on the local churches throughout the world. Papal teaching has frequently drawn on the Conciliar texts, affirming them, interpreting them and also developing and applying them. There have been frequent general assemblies of Bishops, where representative bishops from across the world meet every few years to discuss matters of importance with the Pope. Many ecumenical dialogues have been undertaken. There has been much local work, some more fruitful than others. New forms of religious life and lay associations are emerging, alongside the renewal of long established forms.
Implementing a council has never been easy, as this Godzdogz series has indicated, and the challenges facing the Church in a rapidly changing world are huge. But Vatican II provided very rich resources, still not fully tapped, both to renew those within the Church and to enable to Church to more effectively bring salvation to the rest of humanity. Its utterances, made in communion with Christ, and in continuity with the tradition of the Church, are insightful and challenging, and seen by many as prophetic. It could still prove to be one of the most important and fruitful councils in history, but that in part depends on how each of us responds to its call to holiness and evangelisation.