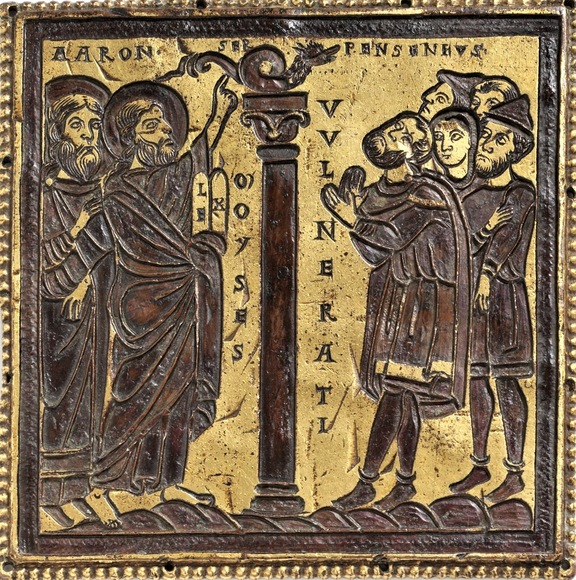 By Br Daniel Benedict Rowlands, O.P | False, solely human “prayer”, is dangerous, even lethal. True prayer bears a divine mark. It is Christ’s prayer: the prayer he taught us − “thy will be done” (Matt. 6:10) −  and the prayer he acted out in his Passion − “not as I will, but as thou wilt.”(Matt. 26:39) Christian prayer is thus fully human, for we bring with us all our desires, but also fully divine on account of that weighty qualification: “but as thou wilt”. It remains dangerous, for it leads us to the cross, but dangerous only to sin.

“Ask, and it will be given you; seek, and you will find; knock, and it will be opened to you. For every one who asks receives, and he who seeks finds, and to him who knocks it will be opened. Or what man of you, if his son asks him for bread, will give him a stone? Or if he asks for a fish, will give him a serpent? If you then, who are evil, know how to give good gifts to your children, how much more will your Father who is in heaven give good things to those who ask him! So whatever you wish that men would do to you, do so to them; for this is the law and the prophets.

Prayer, and especially petitionary prayer, is dangerous. Some regard prayer as a harmless superstition of a prescientific age − but perhaps acceptable in desperation. In the pagan world of antiquity, prayer is rather more unsettling. The Iliad opens with Chryses, priest of Apollo, bringing a deadly plague on the Greeks by a prayer for retribution. The poet Juvenal reflects on what destroyed the Roman Republic’s first triumvirate: “Nothing else but the top position sought by every trick / Nothing but extravagant prayers granted by spiteful gods” (Satire X, l. 110-1). Here are certainly grounds for dread: prayer can even bring about one’s own downfall.

Perhaps, then, our Lord’s teaching emphasises how rich in loving mercy the God of Israel is, and so how wholly different He is from those false, anthropomorphic gods of Greece and Rome?  True though this may be, let’s return to the text of the Gospel.  “What man of you, if his son… asks for a fish, will give him a serpent?”. From the obvious negative response implied, the logic of this passage encourages to infer − a fortiori − so too will our heavenly Father heed our petitions. The phrase of St Matthew is in fact: “how much more will your Father in heaven give”. Superabundance can look startlingly different to what we might expect.

In the book of Numbers, the wandering Israelites ask the Lord:  “Why have you brought us up out of Egypt to die in the wilderness? For there is no food and no water, and we detest this miserable food.” (Num. 21:4) The response? “Then the Lord sent fiery serpents… and they bit the people, so that many… died.” (Num. 21:5) They ask, albeit impertinently, for food and water − and the Lord has answered them with serpents. But what a wonderful gift they turn out to be. God’s grace, if we accept it, does not come in an isolated dose, but as “grace upon grace” (John 1:16): “how much more will your Father [] give” (Matt. 7:11). These deadly serpents are indeed worth more than fish: they elicit true repentance. “We have sinned, for we have spoken against the Lord…take away the serpents from us.” (Num. 21:7)  So pleasing is this petition,  preceded now by confession not complaint, that it merits salvation. And recall the form that took: “Make a fiery serpent, and set it on a pole; and every one who is bitten, when he sees it, shall live”. Even something apparently dangerous, when accepted from God in trust, is transformed into a source of healing.

“Just as Moses lifted up the serpent in the wilderness, so must the Son of Man be lifted up, that whoever believes in him may have eternal life.” (John 3:14). At Mass tomorrow we hear from Esther in her mortal peril: “Save us by thy hand, and help me, who am alone and have no helper but thee, O Lord”. (Esther 14:14) What leaves us more alone than sin? Like Esther, our prayer is heard. It is heard because our blessed Lord has made it for us: “with loud cries and tears, and he was heard for his godly fear” (Heb. 5:7). On the Cross, he became the answer to our prayer: “so marred was his appearance, beyond human semblance…” (Isaiah 52:14). He not only appears with afflicted human flesh, but truly and wholly embraces it; marred only in the flesh, but with spirit unmarred by sin. Yet he is “beyond human semblance” in another sense: he is also God.

The people of Israel did not recognise the answers to their prayers in the wilderness. They complained of “miserable food”, even as they were fed with heavenly manna. In the Book of Wisdom we hear that the manna “minister[ed] to the desire of the one who took it, [and] was changed to suit every one’s liking” (Wis. 16:21). The bread of angels would not accommodate their depraved desires; so, with their desires unsated, the people complained. This false, solely human “prayer”, is dangerous and lethal. True prayer bears a divine mark. It is Christ’s prayer: the prayer he taught us − “thy will be done” (Matt. 6:10)− and the prayer he acted out in his Passion −”not as I will, but as thou wilt.”(Matt. 26:39) Christian prayer is thus fully human, for we bring with us all our desires, but also fully divine on account of that weighty qualification: “but as thou wilt”. It remains dangerous, for it leads us to the cross, but dangerous only to sin. What is danger but the “power of a master” (or Lord) − that’s the origin of the word, dominarium − “the cross is foolishness to those who are perishing, but to us who are being saved it is the power of God” (1 Cor. 1:18). As we apply ourselves more assiduously to prayer this Lent, let us cultivate a holy fear as we contemplate our Lord’s Cross. If we do so, we will encounter the Redeemer’s loving gaze, a gaze colouring our own vision with an Easter joy that reveals we are in danger no longer: “where, O death, is your sting?…thanks be to God, who gives us the victory through our Lord Jesus Christ” (1 Cor. 15:55,57)

Image: A copper plaque (originally enamelled) of Moses and the Brazen Serpent, originating from Mosan (Meuse valley), ca. 1160 (from the Victoria and Albert Museum, London).