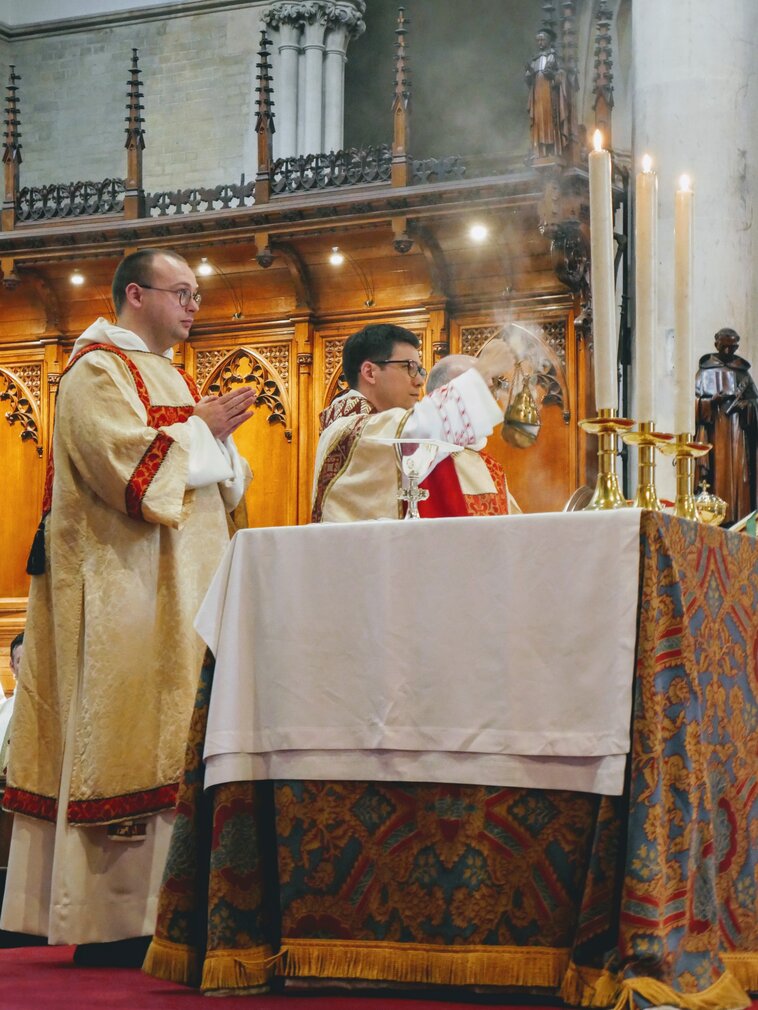 News | This is the text of the homily preached by Fr Timothy Radcliffe OP at the First Mass of Thanksgiving of Fr Joseph Bailham OP, at The Rosary Shrine in London on Monday 5th July.

My dear brother Joseph, the gospel shows us two courageous figures who are in great distress but who do not give up. There is the official who simply refuses to believe that his daughter cannot be saved. And there is the woman who has suffered for twelve years of a terrible illness, but she goes on hoping. Jesus says to her ‘Courage daughter, your faith has saved you.’

Before I went to Rome in 1992 I went to see one of our brethren, Anthony Ross, who used to live here at St Dominic’s when he was Provincial. He had suffered a terrible stroke and almost lost the power of speech. He spoke one word to me: ‘Courage’. That word has nourished me ever since. At the heart of your life as a priest will be preaching courage. ‘Courage. Your faith has saved you.’

Everyone lives through moments when the world collapses and they wonder what future they have. And humanity is in a pretty dire state and many young people are losing hope in the future. We are enduring the pandemic with its terrible consequences; there is the catastrophe of climate change looming. Democracy is on the retreat in many places. A friend of mine told me last week that none of her four children want to have children themselves. They say, ‘we don’t want to bring children into this doomed world.’ But as a priest you will charged with keeping hope alive, for each of us and for humanity. And hope for yourself, what ever happens.

What keeps alive our courage? It is, in a sense, dreams. Not dreams that we create ourselves, the dreams that society feeds us, but God-given dreams. When Jacob is fleeing the wrath of his brother Esau, and wonders what lies ahead, he has a dream. He sees the angels ascending and descending. And he receives the promise of God.

“Know that I am with you. I will protect you wherever you go, and bring you back to this land. I will never leave you until I have done what I promised you.” (Gen 28:15)

We are celebrating the votive Mass of St Joseph, your patron. He found himself in a quandary, uncertain what to do. Should He give away Mary and forget all about her? Then God came to him in a dream and gave him the courage to marry her and face the future. And there was Joseph of the Old Testament, whose title was ‘The Lord of dreams.’ He interpreted other people’s dreams. The dreams of the Pharaoh and his servants. He showed  what these dreams really meant, and how they were filled with promise. Our best dreams are not just about ourselves.

In our society people often talk of dreams, as if it were the clue to being really alive. When England beat Germany last week, one newspaper had the headline ‘Living the dream.’ There is the ‘American dream’, that you can be anything you want. This is a complete illusion. I could never have been an accountant or run the four-minute mile. People dream of wealth and fame.
Your vocation as a priest will be to awaken people to the dreams of Jacob and of Joseph. The dream of an infinite love which can never be defeated. The dream of the Lord who promises us utter security whatever happens. ‘I will never leave you until I have done what I have promised you.’ For this dream is not an illusion but the deepest truth.

The experts tell us that everyone at some stage, usually in their teens, has some sort of encounter with the transcendent. Curtain lifts for a moment and we glimpse a love, a beauty and a happiness which is infinite. I bet it happened to you, Joseph. It may come through art, music or nature. But if there is no one around to interpret the moment, it can pass. Kids wonder what had happened. Did I eat a magic mushroom?

So priests, and also parents and teachers and friends, have a precious role in opening people’s hearts to the great dream that is the truth, of infinite love, which nothing can destroy. It is the ultimate happiness and the only security. It is also a perilous and dangerous vocation because it is easy to crush people’s dreams and disillusion them.

So Joseph, I pray that as a priest you may always have and share courage and hope. Even when God seems absent, he is here. Even in the darkest moments, like Jacob you will be able to say “Truly, the LORD is in this spot, although I did not know it!”