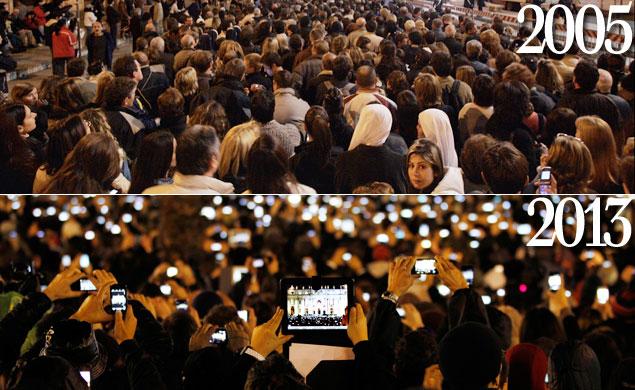 Undoubtedly the key feature that marks out our generation from previous ones is the rapid advances made in technology over the last decades.
The Holy Father notes that ‘we are the beneficiaries of two centuries of enormous waves of change’. This is a cause of rejoicing because these advances open up numerous opportunities and possibilities for advancing causes which help promote and improve the quality of human life; the Holy Father is speaking principally of how technology can help contribute to the improving of civic infrastructure. Giving a theological view to these developments, the Pope suggests that the human capacity for modifying nature for ‘useful purposes’ has marked humanity ‘from the beginning’ and is a demonstration of humanity’s God-given gift of creativity.

Yet the Holy Father warns of the dangers and negative factors of this advance in technology. He recognises that possession of technology is a form of power, at times even ‘tremendous power’. The human family now has the potential for a power over itself unparalleled in human history, and ‘yet nothing ensures that it will be used wisely’. Whilst—as just mentioned—technology has marked off humanity from the rest of the animal world, our intervention in nature—according to the Pope—has meant ‘being in tune with and respecting the possibilities offered by the things themselves’. Before, humans were the heirs of what nature had to offer, ‘as if from its own hand’, whereas now it is we humans who ‘lay our hands on things, attempting to extract everything possible from them whilst frequently ignoring or forgetting the reality in front of us’; the relationship between nature and humanity is now more confrontational than a relationship of extending a ‘friendly hand to one another’.

A key point that I think the Holy Father is driving at in these paragraphs devoted to technological advances (cf. 102-114) is that the freedom perceived to entail these advances may not always do so. Whilst addressing on a larger scale the ownership which many corporations and countries have over various aspects of technology, I think we can also reflect on the role of technology in our own personal lives, thinking especially of the ever-present internet, and ‘smart’ technology. The internet is widely seen—and rightly so in many respects, in my opinion—as giving a freedom to individuals in the area of creativity and access to a wealth of information; and yet, the internet, smart phones and tablets, and the like, can very easily—and often unsuspectingly—begin to dig their technological fingers into our lives, holding us ransom and, in fact, diminished of freedom. From individuals in a family playing with their phones rather than talking to each other, to the rise in addiction to pornography and internet gaming, the technology which, used properly, can help direct human beings towards the bettering of the quality of human life, can instead make us slaves to the Terabyte-God dwelling in ‘The Cloud’, with the effect of becoming isolated from other persons, sometimes those with whom we live under a common roof.

Of course, the internet and smart technology can be used—as this blog hopefully demonstrates—to promote the Faith, helping to bring, in a new way, the Good News of Salvation to the ends of the earth, introducing the peoples of the world to the One God who dwells not in ‘The Cloud’, but because of whom that cloud, and all the wonders of technology, from which we can potentially benefit, can even exist.