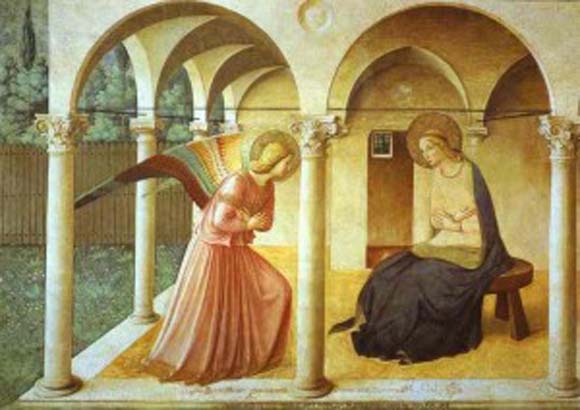 Godzdogz
Home  /  Godzdogz  /  March 25 – The Annunciation of the Lord

March 25 – The Annunciation of the Lord

The Annunciation is the turning point in human history because it is the moment in which the Word became flesh in the womb of Mary. It is at once the fulfillment of Old Testament joy and the beginning of New Testament grace.
What were the greatest joys spoken of in the Hebrew scriptures? One was the joy of a barren woman discovering that she was to have a child. Such was Sarah, the aged wife of Abraham, who bore Isaac, the mother of Samson, Hannah the mother of Samuel, and Elizabeth the mother of John the Baptist. Mary says to the angel, ‘how can this come about since I am a virgin?’ Here is a different kind of infertility, a conception even more extraordinary than those of Samuel, or of John the Baptist. Here, without any violence or intrusion into His creation, God’s creative power brings into being the human nature that the eternal Son of God took to Himself.
Another great moment of joy is that of being in God’s presence. The most striking example of this is the dance of King David as he welcomed the Ark of the Covenant to Jerusalem. His wife, watching from a window, was not amused that her husband should throw off his clothes to disgrace himself in front of the servants. David’s joy was unrestrained, however, a joy overflowing because God was in the midst of His people (2 Samuel 6). The angel Gabriel says to Mary ‘rejoice because the Lord is in your midst’. God is with us in a new and remarkable way: how could we not be joyful?
A third great experience of joy in the Bible is the liberation of slaves. The defining moment in the history of the relationship between the Hebrews and their God is the crossing of the Red Sea. The Lord brought them out of the land of Egypt and led them from the place where they had been slaves to a place of freedom, a land flowing with milk and honey. This joy too is contained in the Annunciation, for the child who is to be born of Mary will be called Jesus. The child born of Mary is the new Joshua, saving his people from their sins and leading them into the Kingdom of God.
Add to these a final moment of great joy, that of the renewal of the covenant. The people sinned again and again, but just as often God offered a covenant to them and taught them to hope for salvation. The new covenant whose first act is the annunciation to Mary is the one foretold by Jeremiah, an everlasting covenant sealing the everlasting love with which God loves us (Jeremiah 36 and Isaiah 54).
The grace announced here is life in the presence of God, freedom in an enduring relationship of love with God. It is the moment in which the new creation begins. And here is a final, joyful wonder. In the first creation the only one to speak was God. ‘Let there be light’, he said, ‘and so it was’. But in the new creation a new grace appears as God enables His human creatures to participate in the work He is doing for them: ‘Let what you have said be done to me’, Mary says. This is the most remarkable mystery of grace, that God who comes to save us gives us the victory. It is one of us – Mary’s Son, our Brother, Jesus Christ – who has achieved salvation for us. He is truly our joy and our grace.
Categories:
Lent, Lent 2011, Our Lady