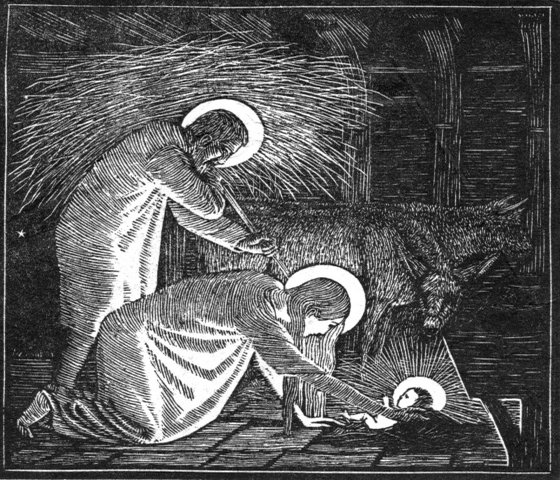 Mary the Mother of God

Today’s Solemnity sends a shiver down the spine of many evangelical and other Christian denominations. The motivation behind their concern is legitimate, but the concern is ultimately ill-founded. The concern is that Catholic veneration (often misconceived as worship) of Mary is a distraction, at best, from worship of Christ, and, at worst, is like the addition of another person to the Trinity.
The reality though is that everything the Church teaches about Mary tells us something about Christ; so that our Marian doctrines, just as the Marian scriptural passages, always point towards her son, Jesus.
In fact, much of what the Church teaches about Mary is a necessary corollary of who Jesus is. Consider the doctrine that we celebrate today of Mary, the Theotokos, the Mother of God. Defined at the Council of Ephesus in 431 – so hardly some modern Catholic corruption – this doctrine seeks to safeguard the truth about Jesus:
The second Person of the Most Holy Trinity, the eternal Son and Word of God the Father, without giving up the Divine Nature or Way of Being, took to Himself our human nature, our human way of being from (not just ‘in’) the Virgin Mary, so that one and the same Person who is timelessly born from God the Father was born in time from His human Mother. He was born from her as man, just as He hungered, died, and rose from the dead as man; but the One born from Mary, the One who died on the Cross, is God. (Richard Conrad, OP, Lecture on Mary, 2015)
Mary is the one who, as we hear in today’s Gospel, treasured all that the angels had told the shepherds about her Son and pondered them in her heart. Just as we treasure what the Scriptures tells us about Christ, so too, we treasure Mary and all that she tells us about Christ.
Treasuring Mary and valuing her intercession – with its Biblical precedent in the miracle at the Wedding Feast at Cana – in no way diminishes the greatness and the otherness of her Son’s divine nature. The relation between Mary and her Son is unique in all of history, for just as He was born of her, so she too was of born of His Creating Word: the Son pre-existed His mother, and it is because the Son is truly divine that we can say she is the Mother of God.
When we look at Mary in art with Her Son, she almost always directs our gaze to Him. I thought I’d come across a delightful exception to this recently, in this charming 15thcentury manuscript illustration which shows Mary reading in bed, while Joseph looks after Jesus for a while. 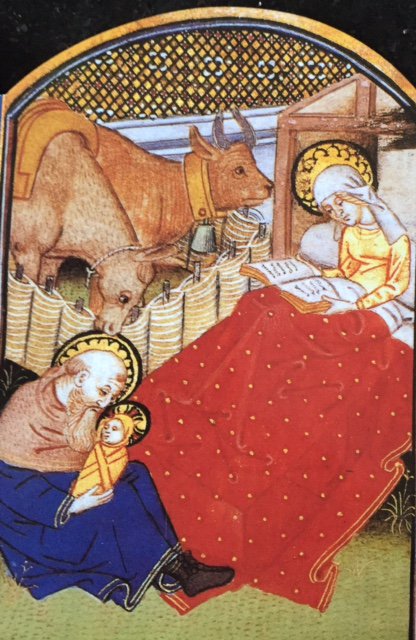 Now, no one wants to deny a young mother, a little bit of relaxation, and time to herself! Yet, we see in this picture something much more profound than that. For while Joseph gazes lovingly at the Incarnate Word, Mary ponders the Divine Word of the Scriptures, and so, even in this moment, her gaze is still ultimately on her Son.
On the subject of Mary in art, I think we can helpfully consider Mary’s as God’s greatest work of art in all His Creation. Then just as our gazing at the beauty of a work of Fra Angelico OP (excuse the Dominican bias) only serves to heighten our appreciation of the genius of the artist; so too when we look at Mary we grow in admiration and love of God. We see what uncorrupted human nature looks like, we see how we ought to be, and we see that true human flourishing needs no status, no degrees, no ostentation, just an unconditional ‘yes’ to the Word of God. Mary, the Mother of God, helps us to make that ‘yes’ a reality, and so today, as every day, we seek her intercession in this most important work of our lives.
Categories:
Our Lady