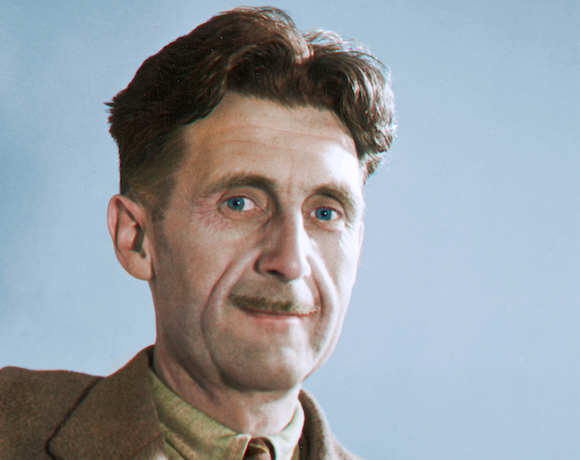 By Br Albert Robertson, O.P. | This week marks seventy years since the death of George Orwell. Br Albert writes about one of his favourite authors.

This week marks the seventieth anniversary of the death of George Orwell, one of the greatest English novelists of the twentieth century. Orwell’s work has become more popular over the past four or five years, as concern about “populism” grows; with Trump’s election and the Brexit vote, many people have been thumbing the pages of 1984 and Animal Farm, for apposite quotations to capture something of our contemporary situation. A New Yorker cartoon from a couple of years ago showed someone working in a bookshop carrying a pile of books, atop of which were copies of books like 1984, Fahrenheit 451, and Brave New World. Her manager points out the new location for the books, and tells her “You’re going to have to move those to the “Non-Fiction Section.”

Why the election of Trump, Boris Johnson, or a vote to leave the European Union should suddenly make these dystopian novels somehow more prescient I’m not quite sure. Nor indeed am I sure that it was these political movements that made the scenario imagined in Brave New World somehow more of a live topic, particularly given the changes Huxley describes have really been going on since the 1960s. I suspect that part of this is probably because we’ve forgotten, or probably rather never learned, Orwell’s lesson about the accuracy of language in political discourse. Orwell matured in the climate of the battle between liberal democracy and the extremes of Communism and Socialism on the one hand, and National Socialism and Fascism on the other. Orwell was never afraid to call out a tyrant when he saw one, but he was keen not to label someone a fascist who quite clearly was no such thing.

Orwell’s politics were complicated, beginning as a socialist and determined pacifist, he was against any kind of war against fascism which he thought would actually precipitate the rise of fascism in Britain, whose imperial capitalism he saw as a natural preparation for such a revolution. But the experience of fighting the Spanish Civil War, recorded in Homage to Catalonia,  and then later what he saw as Stalin’s betrayal of Communism in the Nazi-Soviet Pact, led him to value a kind of democratic socialism which valued democratic institutions, and sought greater involvement of the working classes in these institutions.

Today there’s usually a desire to somehow baptise an author as Catholic by perhaps drawing out something of their work which could be read in a Catholic, or at least Christian. Such an approach isn’t possible with Orwell: he was an atheist humanist, although still one who habitually attended Holy Communion and took part in the social and civic world of Anglicanism, albeit with a slight reserve and distrust. Certainly Keep the Aspidistra Flying features a pro-life story as both the main characters, Gordon and Rosemary, reject the idea of Rosemary having an abortion to end an unplanned pregnancy. But while we can’t read Orwell as a Christian writer, we can read him as something of an ally in moral arguments, not only on abortion, but also contraception, the evils of unfettered capitalism, and the tyranny of an oppressive state. Throughout much of Keep the Aspidistra Flying Gordon, desperately trying to make it as a writer, ruminates on a poem entitled St Andrew’s Day. In the poem, Orwell gives a grim sketch of those enslaved to

The lord of all, the money-god,

Who rules us blood and hand and brain,

Who gives the roof that stops the wind,

And, giving, takes away again…

Orwell knew first hand how oppression – either of grinding poverty or of totalitarian government – hems people in, or as his poem puts it ‘…chills our anger, curbs our hope, / And buys our lives and pays with toys…’ But more fundamentally this kind of oppression makes them less of who they really are:

Who binds with chains the poet’s wit,

The navvy’s strength, the soldier’s pride,

And lays the sleek, estranging shield

Between the lover and his bride.

But if Orwell is good at the diagnosis, he wasn’t so good at prescribing a cure, for no matter how much his socialism was moderated by the horrors of Stalinism, he still maintained a kind of Communist distrust of religion.

Orwell, both in his fiction and non-fiction writing, is one of my favourite authors, perhaps because he is able to diagnose the problems of his society and translate them in a way that is insightful and amusing. Burmese Days remains some of the best writing about colonial racism and Animal Farm is still a useful morality tale, like a twentieth century version of Aesop’s Fables. But reading him is still frustrating, for you only ever get the diagnosis, the cure, if one is suggested, never goes beyond politics.