We Dominicans have not always been very good at promoting devotion to Our Holy Father St Dominic: that’s why our constitutions explicitly remind the brethren of our duty to foster a deeper appreciation of St Dominic’s life and ministry. Even at his birthplace in Caleruega, it feels like there is greater devotion to his mother, Blessed Jane of Aza, than there is to St Dominic, whose legacy as a preacher and founder of a religious order has left a deep impression on the history and intellectual culture of Europe. There is, however, something appropriate about this: St Dominic was, above all, a preacher and the life of good Christian preachers consists largely in learning to point away from themselves, so as to become translucent to the light of Christ’s truth, and repeat John the Baptist’s “He must increase; I must decrease” (Jn 3:30) in each successive era. So it is that St Dominic, the founder of the Order of Preachers, never draws attention to himself, but – as his early biographers observed – lived an entirely God-centred life, speaking only to God or about God.

In Segovia too, the cave in which St Dominic devoted himself to prayer and penitential exercises is now hidden in the middle of a modern campus university. Although Dominic probably wouldn’t recognise the modern academy, his motley band of sons – who have continued century after century to follow in his footsteps – have contributed much to the development of the university system. The presence of the cueva, a place of prayer and penance, at the heart of the University in Segovia is a reminder, however, that for Dominicans, study is always understood as a spiritual and an ascetic discipline. It may seem that the cave is the grit around which the pearl of the University develops, but in fact our study is the grit, and our preaching the pearl. Thus for Dominic study was not an end in itself, nor was it primarily about amassing facts, gaining advanced qualifications, or becoming learned, but rather about discerning the voice of God, speaking primarily through the Scriptures and Tradition of the Church, but also in – and to – our culture. This listening, because it is a listening to the voice of God, is one that demands obedience, an obedience which sends forth the listener for preaching and teaching. Throughout Dominic’s life, and the life of the brothers gathered around him, listening and preaching always go together: Dominicans preach as listeners, and listen as preachers, for no man is sent as an apostle without having first been called as a disciple.
From the outside, I expect that from time-to-time it seems like St Dominic has been eclipsed by the Order he founded. Sometimes, I suspect, it seems like we talk about our brother St Thomas Aquinas more than we do about our father St Dominic. Even during his own lifetime, Dominic’s vision that lay brothers should assume the burdens of leadership, in order to free the ordained for preaching, was rejected by his brothers meeting in General Chapter, a decision which Dominic accepted in humility. I suspect many subsequent Dominican superiors will have tasted such ‘defeat’ at the hands of the brothers, but this isn’t really a defeat at all, since our way of life commits us to discerning the will of God as a community of brothers. What Dominic bequeathed to the Order, and which we must never lose, is the sense of the radical urgency of our task. The type of urgency with which one puts water on a burning building is the type of urgency with which the sons of St Dominic approach this task of prayerful preaching: it is the single priority of our lives, and it is in following Christ in the task of proclaiming his Good News that we – like St Dominic – find our essential identity. 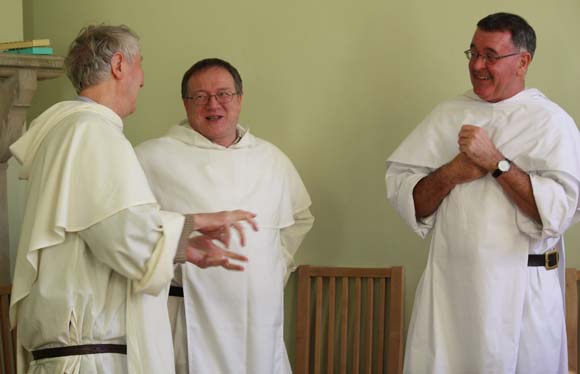 This sense of urgency does not derive from an obsession with doctrinal purity. Rather, St Dominic saw with great acuity that the world in which we live is the very world in which we encounter God, and that it is this simple principle that is so often threatened. The resurrection of Jesus Christ is not an event in the same order as the resurrection of Lazarus: Christ does not return to the same old unchanged creation, but to a new and transfigured one, shot through with new possibility. No matter what new and innovative ways we find to scourge our world with the sins of violence and hatred, these can be healed and corrected by a faithful preaching of the Gospel. This Good News that we proclaim is not an abstract truth, but one that has brought us freedom, and a gift that we share with our brothers and the world, “that our joy may be complete” (Jn 15:11). Thus, like St Dominic, our lives together should be lives of joy and laughter. Ours is not the cheap laughter of the drunkard, but the costly laughter, purchased for us by Christ’s passion and given freely to us, the laughter of those intoxicated by the sharing of God’s word, and thus of a joy that is born of authentic hope, itself born of faith in the gospel.

So, while there are very few people who espouse the strange doctrines of the Manicheans that Dominic dedicated his life to preaching against in the South of France, there are plenty who follow them in denying the possibility of God’s presence in the world. Many of our fellow countrymen stand on one of two metaphorical beaches: either they stand with Matthew Arnold on Dover Beach, watching the tide of faith apparently recede, or they stand with the Manic Street Preachers on Porthmadog Sands, singing ‘this is my truth, tell me yours’. At the heart of both these positions – the modern and the postmodern – there is a rejection of the presence of God and his Truth in the world. Supported by the prayers of Our Holy Father, then, may we be faithful in our task of preaching, pointing out the presence of God in our midst, that – in the word of Francis Thomas’ poem – Jacob’s ladder is pitched “betwixt heaven and Charing Cross”, and “Lo! Christ walks upon the water, not of Genesareth but Thames”.