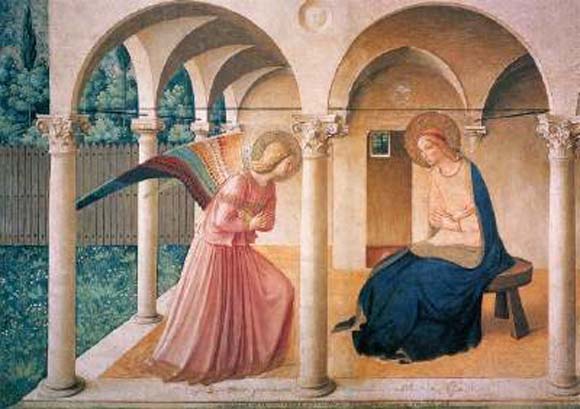 Godzdogz
Home  /  Godzdogz  /  Solemnity of The Annunciation of the Lord

Solemnity of The Annunciation of the Lord

The encounter between the Angel Gabriel and the Blessed Virgin Mary changed human history forever. It provides the setting of the Incarnation, when “the Word became flesh” (John 1:14).. The sheer profundity of this meeting taxes superlatives both with respect to the remarkable circumstances in which the event took place, and the seminal significance of the Incarnation and what it meant for human history.
The circumstances are familiar to us, not least through our recitation of the Angelus: the Archangel Gabriel, sent as God’s messenger, appears to Mary, a young Israelite girl, living in the seemingly obscure, small town of Nazareth. These humble circumstances befit the immeasurably humble act of God becoming man.

The  Angel greets her, “Hail, full of grace, the Lord is with you” (Luke 1:28) – familiar words that we echo every time we pray the “Hail Mary”. Now familiarity of the event and the words spoken is no bad thing, but there is a danger that in being so familiar, we somehow overlook, or remain in some way unmoved, by the jaw-dropping situation.

Certainly, even Mary initially was “greatly troubled” by the angel’s greeting. Then, understandably enough, she was puzzled by the revelation that despite having no husband, she would conceive and bear a son.
“How can this be?” she asked. Even in her puzzlement, there is a sense of restraint; who amongst us would have asked only one question?
The angel told her that she would conceive by the Holy Spirit, and that her barren cousin, Elizabeth would have a son, “For with God nothing will be impossible.”
Mary’s response is one of humble submission: “Behold, I am the handmaid of the Lord; let it be to me according to your word.” She accepted everything in perfect faith, hope and charity.
The potency of this account might lie partly in its provenance. We learn of this event through St. Luke’s Gospel alone. But how did St. Luke learn of it? Luke’s source, whether directly or indirectly, must surely have been Mary herself. Who other than Our Lady herself could have provided the original account of what happened during those remarkable moments? Who else could have described how she felt and what was said to her?
St. Bernard reflects upon the seminal significance of the event for the salvation of humanity, and made this most powerful scene his prayer: “You heard the annunciation, Blessed Virgin, that you would conceive and bear a son – not by knowing man, but by the power of the Holy Spirit. Look, the angel awaits your response… We took, condemned to death by divine judgment, live in hope of hearing a word of mercy. The cost of our salvation is in your hands. If you say yes, we will be set free… because the consolation of the sorrowful, the liberation of slaves an prisoners, the redemption of all the children of Adam, your lineage, depends on your response… Open your heart to faith, your mouth to consent, and your chaste body to the Creator” (Laudes Mariae, Sermo 4, 8-9).
Let us celebrate Our Lady’s role in our salvation and entrust ourselves to her peerless intercession, today and always.


Ave Regina Caelorum, the traditional hymn to Our Lady in Lent,
set for 8 voices by de Victoria, sung by The Sixteen