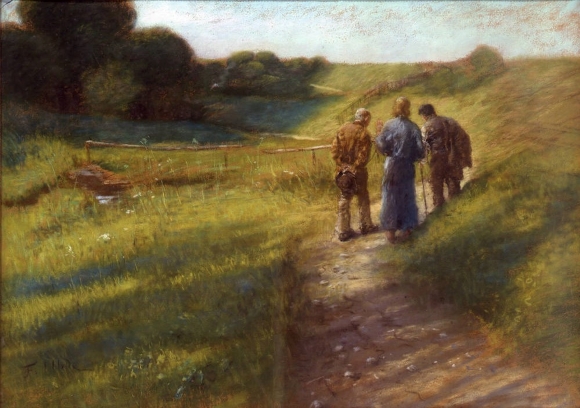 Godzdogz
Home  /  Godzdogz  /  Take nothing for the journey, except a staff

Take nothing for the journey, except a staff

By Br Pablo Rodríguez Jordá, O.P. | In the second of our Thursday Gospel meditations, Br Pablo reflects on the motif of the ‘journey’ in the Gospels as an image of our life as Christians.

And he called to him the twelve, and began to send them out two by two, and gave them authority over the unclean spirits. He charged them to take nothing for their journey except a staff; no bread, no bag, no money in their belts; but to wear sandals and not put on two tunics. And he said to them, “Where you enter a house, stay there until you leave the place. And if any place will not receive you and they refuse to hear you, when you leave, shake off the dust that is on your feet for a testimony against them.” So they went out and preached that men should repent. And they cast out many demons, and anointed with oil many that were sick and healed them.

When we read the gospels we are often present, almost like bystanders, at moments when Jesus calls someone to ‘follow’ him. However, it is not so often that we get a glimpse into the practicalities of following him, and I mean practicalities in a literal sense. Mark’s version of this gospel is different from Luke and Matthew’s in a number of interesting ways, but probably the most noticeable one occurs in the list of things the apostles can take for the journey. Matthew and Luke seem to be making a rather elevated point about trusting in Providence. They give a long list of accoutrements the apostles should not take, almost as if emphasising, hyperbolically, that carrying nothing at all is a sign of holy abandonment.

In Mark, more interestingly, Jesus does have something to say about what the apostles should and should not take on the journey. It reads almost like one of these lists of items one gets before a school trip. ‘Don’t forget your staff, but don’t bring a bag; no need to wear two tunics, a pair of sandals will just do.’ Anyone packing for a trip has probably had the feeling that there is something prophetic about what you choose to take or to leave behind. I’m sure some of you will still remember the Dominican pilgrimage to World Youth Day in Poland a few years ago. Nobody would have thought, as we were setting out from London, that Wheelock’s Latin Grammar could have filled so many hours of entertainment on the bus, or that a can of spam could ever be so tasty, especially when you are wandering about the Campus Misericordiae trying to find a place to sleep with just enough food…

The things that Jesus allows the apostles to carry, a staff and a pair of sandals, can only mean one thing: at the time, to be a preacher of the Gospel, you had to be a walker, and probably be willing to walk long distances at quite a pace. Perhaps for this reason St Dominic laid his eyes on this little passage, which we could call without exaggeration the founding charter of the Order of Preachers; and this is because reference to the apostles being sent ‘two by two’ is only found here, in Mark’s version, just as St Dominic would do with the first friars preachers many centuries later. Now, the material conditions for the preaching of the gospel have certainly changed a lot since Dominic’s time or the evangelists’, but I think this list of objects can still speak to us as a parable of our lives as Dominicans. Jesus sends the apostles two by two: we are never alone in our mission; there is always ‘another’ next to us. The mission is never ‘my’ mission but ‘our’ mission; there is in fact very little I can call my own. Bread, money, equipment, are all to be received from the hospitality of others. And so it is for us: the food that we eat, the money we use, we owe in gratitude to our benefactors, whether we bear this in mind or not. The most menial objects around us are gifts, and so they have a meaning that transcends their immediate utility; they are given for our mission, for the building up of the Church.

So, one of the two things the apostles are allowed to take is staff, a rabdos in Greek. It is same word that in the Septuagint translates the Hebrew matteh, the term used for the staff of the patriarchs, of Jacob, and also of Moses and the leaders of the twelve tribes. We ourselves of course carry on the staff of our own patriarch, St Dominic; we bear his witness and blessing, and indeed the blessing of all the Dominicans that have preceded us. It is the staff that propels us forward, but also on which we lean when we are fatigued from the journey. The other item is a pair of sandals, and I can’t find a better image than the one St Augustine himself suggested when he said, ‘the foot should neither be covered above nor be naked on the ground, that is, that the Gospel should neither be hid, nor rest upon earthly comforts.’ As for the two tunics which Jesus forbids the apostles to take, Augustine saw in this a summons to abandon any duplicity: for a disciple and indeed for a religious, there can be no back door, no mask, no disguise, only single-heartedness with the Lord. Mark’s gospel then goes on to say, ‘when you enter a house, stay there until you leave the place’. The meaning of this for us is obvious: stay there, stay, do not leave before the appointed time, take root, be faithful to the demands of the house where you are; and then, move on to the next place.

Joseph Campbell, a scholar of folklore and mythology, held the theory that all myths are at bottom one and the same myth, the ‘hero’s journey’, as he called it. It is not difficult to see why a ‘journey’ could function as the symbol of anyone’s life. But I don’t think Campbell’s theory works. Some aspects of the Christian myth don’t fit the schema. In the Christian myth, for instance, there is no obvious return home, no going back to Ithaca. The moment the apostles follow Jesus, they know they are not coming back, and in fact none of them will die in their native land. Their stories are open-ended probably because the plot depends on the drama of human freedom: if they receive you, stay; if not, leave. Jesus obviously says this prophetically: he knows that at the heart of any Christian story is the Cross, and that in order to imitate him, we must accept the possibility of being rejected. But it is only after we have experienced suffering and rejection that we can shake off the dust on our feet, the dust of our imperfection, of our selfishness, of our sin; not as a testimony against our enemies, but as the gospel says in the Greek, a testimony for them, that by dying and rising again we may lead for others the way to our true home.

This reflection was first preached at Compline before the student brothers