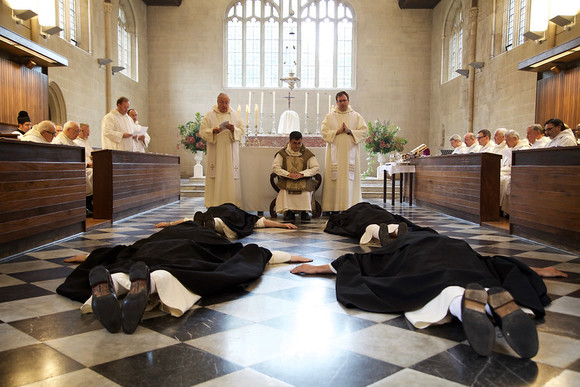 Godzdogz
Home  /  Godzdogz  /  The God Who Speaks: Measure for Measure?

The God Who Speaks: Measure for Measure?

By Br Daniel Benedict Rowlands, O.P. | The divine life simply cannot be clung to and possessed as a prize, but must be ceaselessly poured out in love. If we are ready to be “poured out as a libation” (2 Tim. 4:6) and so offer ourselves as  “living sacrifices” (Rom. 12:1), then we become conduits of grace, sanctifying others and are sanctified ourselves in the process.

St Mark has spliced together three aphorisms of Jesus in today’s Gospel:  “Is a lamp brought in to be put under a bushel”; “the measure you give will be the measure you get”; “to him who has will more be given, and from him who has not, even what he has will be taken away”. Although it is hardly surprising that all three sayings can be found in each of the synoptic Gospels – after all, Matthew, Mark, and Luke are called “synoptic” for the very reason that they can be “looked at together” owing to their similar perspective on Jesus’ life – it is nevertheless instructive to pay attention to the differences we find.

Firstly, these three sayings are only brought together in this particular combination by St Mark. In Matthew and Luke, the ‘measure for measure’ saying appears in the context of the injunction against judging others, whereas the ‘rich get richer’ saying follows the Parable of the Talents. This latter saying also follows the Lucan rendering of ‘the lamp under a bushel’, but with the distinction that St Mark stresses not equity – ‘measure for measure’ –  but superabundance: “still more will be given you”. On the whole, I think the presentation found in Matthew and Luke gives the sayings a sense that is particularly easy to understand, not least because the intended parallel is spelled out. For instance, “Judge not, that you be not judged” is paired with the ‘measure for measure’ maxim, whilst the Master’s counterposed judgements in the Parable of the Talents: “you have been faithful over a little, I will set you over much” and  “wicked and slothful servant… you ought to have invested my money… take the talent from him, and give it to him who has the ten”, explicitly points to the sense in which the ‘rich get richer’.

One final point is needed to set the scene before I offer a brief meditation emphasising the uniqueness of St Mark’s synthesis. The context is the immediately preceding passage  of yesterday’s Gospel, the parable of the sower, which ends with an explanation of the seed sown on good soil: “they hear the word and accept it and bear fruit, thirty and sixty and a hundredfold”. The fruit being spoken of can certainly be interpreted as personal holiness, the “fruit unto sanctification” spoken of by St Paul (cf. Romans 6:22), but St Mark’s segue into the “lamp under a bushel” points to an additional, evangelical implication that flows from that inward transformation accompanying the assiduous assimilation of the Word. To adopt St Thomas Aquinas’ phrase: “it is better to enlighten than merely to shine”. Or, to push the botanical metaphor a little further, the fruit we bear is itself a bearer of seed, the seed of the Word, indeed the fruit is ordered to the dispersal of the seed through the proclamation of the Gospel. There is of course a deep and inextricable link between the personal and ecclesial senses of “fruit”. Grace, without which the act of faith is not possible, is the “seed of glory” (another of St Thomas’ expressions) but “faith comes from what is heard” (Rom. 10:17).

What about “the measure you give will be the measure you get, and still more will be given you”? Well, the “seed of glory” is nothing other than the “beginning of eternal life”, eternal life in which we become “partakers of the divine nature” (2 Peter 1:4). But God, even as we know him through the natural light of reason, is, to use the scholastic jargon, ‘pure act’. The divine essence is sheer ‘being itself’. God ‘is’ unqualifiedly. In Him there is no potentiality. We say God is immutable not because he does nothing, but because he ‘has’ his being all at once. In the lives of finite creatures like ourselves, we experience change because we ‘actualise potentials’, that is, realise latent capacities. God’s act of existence is so metaphysically dense, indeed so much so that it is beyond our comprehension, that it has no residual potentiality. Through revelation we know even more about this dynamism of the Godhead: we know it is Trinitarian. Moreover, we know what this Trinitarian life looks like when “projected onto our history” (a favourite phrase of Fr Herbert McCabe OP), for it is the historical, redemptive mission of Jesus, and the temporal mission of the Holy Spirit in virtue of and as the consummation of Jesus’ sacrificial love manifested in his passion, death, and resurrection.

So, if the divine life is to be in us, then our mode of being must also be conformed to the divine mode of being, as far as human nature permits, and it is our Lord that provides the pattern for doing so. Two features of the pattern follow directly from what I said about the divine nature: the divine life simply cannot be clung to and possessed as a prize, but must be ceaselessly poured out in love. “My Father is still working, and I also am working” (Jn 5:17). What kind of work is he speaking of? “Christ Jesus… did not count equality with God a thing to be grasped, but emptied himself” (Phil. 2:6-7). If we do not empty ourselves –  “If any man would come after me, let him deny himself” (Mk 8:34) – then we stifle the “spring of water welling up to eternal life” (Jn 4:14). If, on the other hand, we are ready to be “poured out as a libation” (2 Tim. 4:6) and so offer ourselves as  “living sacrifices” (Rom. 12:1), then we become conduits of grace, sanctifying others and are sanctified ourselves in the process.

The second feature is that when we give away the divine life – that is, when we make a gift of ourselves –  we aren’t caught up in a zero-sum game. In giving to others, we aren’t consigning ourselves to a commensurate loss, nor do we expect the justice of an equal return. In exchanges between finite beings, such notions may seem natural.  But in God, in whom “we live and move and have our being” (Acts 17:28), we are in contact with infinite being who remains undepleted by our dependence on Him. To the giver, “still more will be given”, that the giver, too, may give inexhaustibly as an instrument of the Divine Giver. Our Lord embodies this pattern in his resurrection in which he is not merely restored to his pre-crucifixion condition, but manifests his glorified humanity.

When read under these rubrics, the final saying scarcely needs elaboration: “to him who has will more be given”. We cooperate with divine grace by becoming conduits for it. As pure act, God abides with us in no other way. As St Clement of Alexandria puts it, the water in wells from which no one partake becomes corrupt. Perhaps we can say that to those who have not, it is not so much what they have will be taken away, but that it will necessarily flow away, for “the Good is diffusive of itself” (a dictum becoming as popular on this blog as it was with the Scholastics). God is Goodness itself, and so far as we ontologically oppose the diffusivity of his goodness, we reject Him who is the full plenitude of being, and without whom we are nothing.