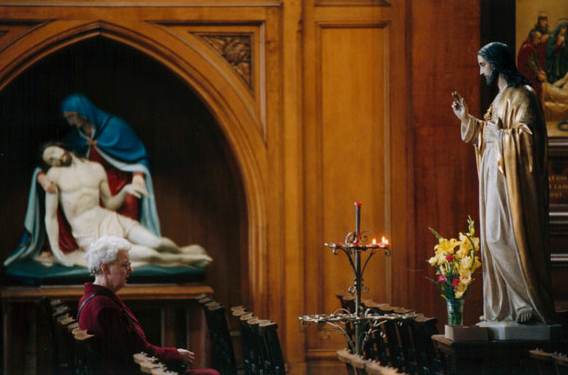 Wednesday Reflection: Brother will be divided against brother

When Jesus speaks about persecutions in Luke 21:12-19 he is not speaking about the violence when Christians are attacked by external forces but rather the persecution that his apostles and early disciples, to whom he was speaking, would experience at the hands of those children of Israel who refused to accept his Gospel as truth or receive him as the Messiah.
We know from history that Christ’s prophecy was fulfilled. St Stephen the Protomartyr may have been the first to lose his life for the sake of Christ’s name but he was not the last and, it seems, even in modern times many more will follow him on the road to martyrdom.
However, as I say I don’t think Christ’s prophecy in Luke 21 is purely about that more general question of martyrdom and persecution. Rather, it seems to me that it’s worth dwelling on what Jesus opens up here: the reality that all too often communities turn on themselves and even consume themselves in violence.
It’s easy to see this truth in contemporary political questions from the last British General Election through Brexit to the US Presidential contest of 2016. Countries, households and friendships can find that what divides them seems far more important than what unites them.
However, this is not merely a secular problem. The Church too suffers from the wounds of division and that somewhat naturally leads to suspicion and even the danger of violence. Of course, if one thinks about all the causes of division too much one might start taking sides, one might even think that the remedy to disunity is so obvious that those who have failed to take our prescribed medicine have done so on purpose!
All this is not to say we should shun difference and accept what is wrong for the sake of unity- sometimes sleeping dogs are in the way! When Peter separated himself from the Gentiles at Antioch he, whose mission was to strengthen the brethren and feed the flock, in fact made division all the more real- he had pitted Jews against Gentiles and for this Paul rebuked him openly (Gal 2:11-2). Ignoring injustice is in fact the greatest threat to the life of any community. But doesn’t this set us back off on the path we just described? The process of pigeonholing our allies and opponents in a great political battle that breeds suspicion and ill-will?
Well, perhaps Jesus has some good advice for us in today’s Gospel: “Remember, you are not to prepare your defence beforehand, for I myself shall give you a wisdom in speaking that all your adversaries will be powerless to resist or refute.”
If something is wrong, if something is done which hurts the community then we can deal with it then and there when it confronts us with the wisdom that comes from Christ: a wisdom built on the knowledge that we should love our neighbour who is everywhere around us- countryman and foreigner, friend and foe. This way of living in the present then means we shouldn’t go back to our rooms and fret and fume over perceived wrongdoings. It presupposes that there’s nothing to be gained by planning our attacks and mapping out our positions in contradiction to someone else, it only makes us angry and bitter, saps our energy and ultimately makes it harder for us to reach those with whom we find ourselves in disagreement.
To avoid this then we should embrace the peace that comes from knowing Christ. Because if we know Jesus then we know that everything will be brought to the good in his good time.
The Quakers have an idea which I’d love to experience: Peace at the Centre. I think it must be from this centre that Jesus promises to speak when we encounter the persecution of the divided community, when we find ourselves divided husband against wife, brother against sister, friend against friend. It’s from this centre that he reaches out to heal in rebuking, to forgive in reproaching.
Categories:
Gospel Reflection