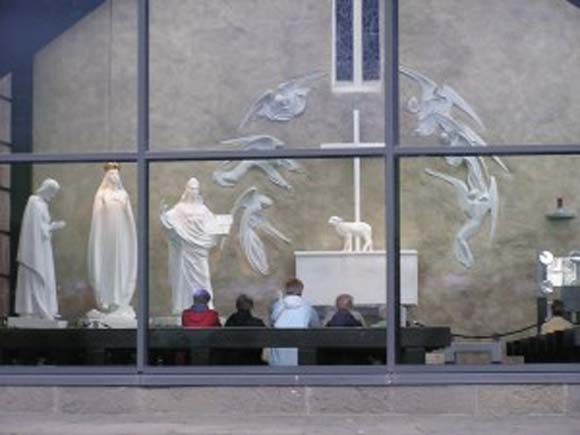 As a young child I was taken, by family living in the west of Ireland, to Our Lady’s Shrine at Knock. It was there, having been presented with a rosary and the obligatory bottle of holy water, that I first came to some early appreciation of the enormous affection and reverence with which Our Lady is held and of the vital role she plays in our lives as followers of Christ.

I knew there was something special about those beads and the prayers which accompanied them in that steady, comforting rhythm; something difficult to put into words, and twenty or so years later that sense of awe has not been diminished through repetition. It has in fact been deepened, as I find now that whatever the day has thrown at me, those mysteries still catch me and draw me out of myself and into the channels of grace whereby Mary Mediatrix takes our prayers, makes them hers, and blessed and approved by Christ, we again receive their fruitful graces by her hand.

Mostly I pray the rosary alone but have through the years prayed it in many places and situations, joyful and sad, and I have never failed to be calmed or moved in some way by it or ever doubted the efficacy of our most powerful intercessor.

Last year I returned to Knock just before entering the Order, again received a gift of a rosary, and as I prayed before her statue pondered, as I often do, on just how much through Christ she has made possible in my life.

Categories:
Rosary, What the Rosary means to me