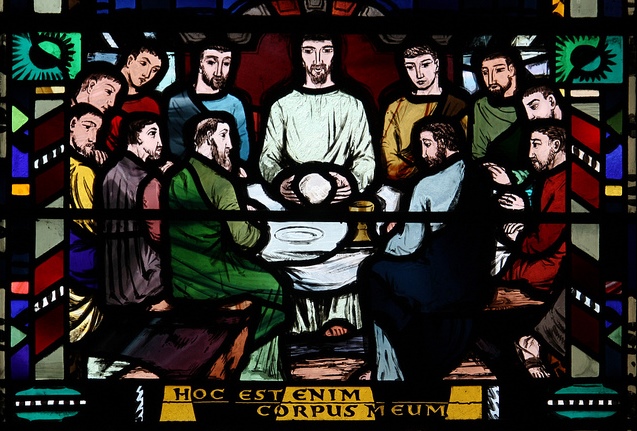 Twenty-First Sunday of the Year. Fr Richard Conrad encourages us to face the challenges presented by the gift of the Eucharist.

To this and the preceding four Sundays, the Church assigns Chapter 6 of St John’s Gospel – though this year we missed one bit because of celebrating Our Lady’s Assumption.

Most Christians, most preachers, who reflect on this Chapter reflect on the Holy Eucharist. They are right; John wants us to do so. All the same, we might ask why John doesn’t tell us plainly about the Eucharist in his account of the Last Supper. Perhaps it’s because he was writing for a non-Christian audience – he tells us towards the end that he wants his readers to come to faith in Jesus. Maybe he felt that people who haven’t come to faith can’t grasp something so strange and precious as the Eucharist. If so, we might ask what he expected non-Christian readers to make of Chapter 6. That’s almost the same as asking what the people who first heard Jesus speak about eating his flesh and drinking his blood, made of his words, for (unlike us) they didn’t have the benefit of hindsight. Let’s recap the discourse John records, trying to imagine ourselves as Jews in 32 AD.

It’s Passover time, a time which reawakens hopes of freedom. In 32 AD that’s chiefly liberation from the Roman Empire. Jesus miraculously feeds 5,000 men – the Gospels say ‘men.’ Perhaps they can become a liberation army that won’t need a catering corps! – so they want to take Jesus by force and make him King. He escapes and crosses the Sea. When they catch up with Jesus he tells them they only want this-worldly food, not what brings eternal life; and they haven’t seen the signs. In fact, the miraculous food has reminded them of the Manna, because they mention it – but they must look deeper. They ask about their part in God’s work, and what further sign Jesus will perform, meaning, ‘What’s the plan of campaign? What’s our role? What’s your next move?’ Jesus calls them to deeper discipleship, then explains that, although the Psalms speak of Manna as ‘Bread from Heaven,’ it prefigured the real Bread from God. When they ask for this Bread, he explains that he is that Bread! This alarms the men, partly because they were familiar with the idea that the Manna, food for the journey, symbolized the Law God gave to ‘nourish’ the journey through life. God’s Law expressed God’s Wisdom. Is Jesus of Nazareth claiming to be God’s Wisdom? Yes. But it takes God-given Faith to recognise him as such, and thus as the New Law, the Pattern to follow.

At this point, Jesus declares that we must eat his Flesh. Job had spoken of his so-called friends eating his flesh – meaning they were attacking him. The Psalmist had spoken of his enemies eating his flesh. The men worry that Jesus is predicting persecution rather than victory. So he insists that they will have to eat his Flesh and drink his Blood if the Resurrection is to be available. In the Old Testament, ‘drinking someone’s blood’ is an expression for killing him. Was Jesus foretelling his own Death?

Today we hear the reaction of these would-be followers. They realise Jesus isn’t offering the kind of liberation they want, isn’t keen on being the kind of Messiah they hope for. So he pulls another punch and says, ‘What if you were to see the Son of Man ascending where he was before?’ – meaning, ‘What if you were to see me raised up on the Cross as I journey to my Father?’ Perhaps some of the men who abandoned Jesus at this point were in the crowd that asked for the ‘guerilla warrior’ Barabbas, whose plan of campaign was to their liking. They would help bring about Jesus’ Death, the Sacrifice that obtained the Gift of the Spirit. Jesus passed through that Death to become the Prototype of the Final Resurrection.

We have come to faith in Jesus; we, like Peter, know he has the words of eternal life. In the Holy Eucharist, we devoutly eat his Flesh and drink his Blood. But the challenge he laid down a year before he gave us the Eucharist can still strike us: Do we want to see all that this great Sign, this precious Sacrament, tells us? It shows us Jesus’ Sacrifice, and brings its power to us: do we want to see Jesus’ self-giving as our New Law, the Pattern to follow? Does this Sacrament of Jesus’ Sacrifice draw us to repent of our sins, which have helped bring about Jesus’ Death? Do we still nurture a ‘fleshly,’ this-worldly attitude? – or will we let the Spirit re-shape our priorities so that we hunger for eternal life, and cherish others with a lively hope that they will be our friends forever in God? Do we measure Jesus’ value to us in terms of what we would like him to do for us? – or are we open to the precise gifts the Divine Wisdom sees it best to grant? To what kind of deeper discipleship is the Holy Eucharist calling us?