Third Sunday of Easter. Fr Leo Edgar draws attention to the Pope’s call for Easter values to transform the world.

Every year on Easter Sunday the Pope gives a blessing to The City of Rome and to the World – ‘URBI et ORBI’. It reminds us that Pope Francis is the Vicar of Christ in the world today and of the words spoken by Jesus to St Peter (Mt. 16) that he was to be the first of many Vicars of Christ to speak in the place of Christ in the world as his Vicar. Recent events of conflict in the Ukraine are a sharp reminder of this – if a reminder is necessary – to the whole world, that the teaching of Christ needs to be heard now, perhaps as never before when the voice of evil is so evident. In his address from the balcony of St. Peter’s in Rome on Easter Day, Pope Francis addressed the evil that exists in the world when he said, ‘We are showing that we do not have within us the spirit of Jesus; rather the spirit of Cain, who saw Abel not as a brother, but as a rival, and thought about how to eliminate him.’

We have been fortunate to have contact with our fellow Dominicans living in the Ukraine since the outbreak of the war, and to receive accurate reports of the situation in the various parts of that stricken country and the hardships being suffered by families divided by the conflict. But it is also very encouraging to hear of the fortitude of these people and the great welcome given them by surrounding countries who welcome the many millions of refugees. This great example of neighbourly action to those in need gives us hope.

Pope Francis referred to the present time as being ‘incredulous’ on what he called this ‘Easter of War’, and the need for the risen Christ to be welcomed once more into our midst as the one who is the only real Saviour of the world! ‘We need’, the Pope said, ‘the crucified and risen Lord, so that we can believe in the victory of love, and hope for reconciliation. Today, more than ever, we need him to stand in our midst and repeat to us, as he did to his Apostles “Peace be with you!”’

This ‘victory of love’ was won by Jesus by his dying a most cruel death and rising again on the first Easter morning to call his disciples to meet him in Galilee. In the return to Galilee it would seem to represent an invitation to return to the meeting place, as the Apostles and the holy women did in our search for peace. Easter is a time for hope! In his address, the Pope points out all the places in the world where there is conflict, where the lack of truth hinders progress, and where humanitarian crises are present in all continents, bringing ‘great suffering to so many people’.

Listening to the reading of the Passion during Holy Week is, as always, a strong reminder of the need for us to be ‘good listeners’ to the word of God; and also good witnesses to the events of the last days of Christ’s life on earth – his Passion, suffering and death, followed by the resurrection as he himself had promised. The resurrection of Christ from the dead is the pointer to our own faith and to the hope in our own rising from the dead and, at such a time of trials, to a greater need than ever to the realization that we can only change the world in which we live (including ourselves) with God’s help and grace. Acts 10 gives us the evidence we need to be witnesses to God’s great love for mankind – as described by those who ate and drank with Christ after the resurrection.

Easter is the time for great joy among Christians. At the beginning of Pope Francis’s exhortation, ‘Joy of the Gospel’, he reflected on the great danger in today’s world and its consumerism, as the feverish pursuit of frivolous pleasures and a blunted conscience, calling it a very real danger. As more and more evidence shows that inequality among peoples continues to increase, let us pray continually for the peace of Easter to touch all who have witnessed the suffering, death and resurrection of Christ. 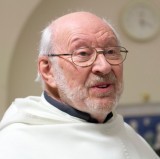