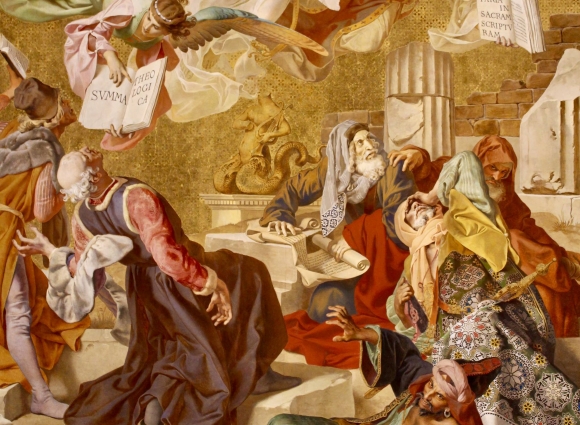 Godzdogz
Home  /  Godzdogz  /  He who is greatest among you shall be your servant; …whoever humbles himself will be exalted.

He who is greatest among you shall be your servant; …whoever humbles himself will be exalted.

By Br Albert Elias Robertson, O.P. | In the first of our Thursday Gospel meditations of the term, Br Albert reflects on service of others as the key to St Thomas Aquinas’s life, and indeed to the Gospel itself.

In these words from Jesus we have the paradox around which much of our lives as Christians are played out. Perhaps even more so, it’s the axiom around which our religious life is lived, from the very first day at the start of our noviciate when we lay down prostrate asking for the mercy of our brothers. It’s a paradox which overturns all of our worldly values and preconceptions. It has an explosive force because it contains the core revelation of our faith — the God who made the universe takes a towel and washes the feet of his creatures, creatures are raised to a dignity which is beyond the reach of their own efforts, and only possible as a gift from their creator. Loose your life to find it; die like the seed of grain and bring forth an abundant harvest; become poor, so as to become truly rich. St Paul makes himself a slave to all, that he might win the more for Christ. We must have, among ourselves, according to Paul, the mind of Christ, who, though he was in the form of God, did not count equality with God a thing to be grasped, but emptied himself, taking the form of a servant.

Without having the mind of Christ, without trying, in our vainest, sometimes our most futile ways, to live out this truth that God’s might is shown most clearly in loving service of the needy, we cannot claim to be Christians. In Christ, the highest becomes the lowest. Not to be a doormat, to be trodden down under foot, to be talked down to, or treated with contempt, because those are the ways of oppression and slavery. No. For the Son has made us free, and so we are free indeed (John, 8L36). For us, the highest becomes the lowest out of love.

There is something in the divine logic, which means that God’s very transcendence and otherness, is that which makes Him search out the poor, the outcast, the marginalised, and us, you and me, poor sinners that we are:

For thus says the high and lofty One

who inhabits eternity, whose name is Holy:

“I dwell in the high and holy place,

and also with him who is of a contrite and humble spirit,

to revive the spirit of the humble,

Much of our sin is found precisely in our refusal to serve. The fallen angel in Paradise Lost thinks it better to reign in hell, than to serve in heaven. That non serviam rings through the pages of the Scriptures as the besetting sin of Israel precisely because our service is our worship:

“For long ago you broke your yoke

and burst your bonds;

Yea, upon every high hill

and under every green tree

The reality is that thinking we have freed ourselves from the service of God, we have in fact enslaved ourselves to something else, begun to worship something else other than God. The greatest tragedy of this false worship, this false servitude, is precisely that we cannot see our own enslavement.

In his saving mission, Christ draws all people to Himself, but not in the way that our worldly logic expects. His moment of glorification is to be hoisted up for public abuse and left to die on a tree. ‘His appearance was so marred, beyond human semblance, and his form beyond that of the sons of men.’ (Isaiah, 52:14).

We have a high bar, the highest bar of sacrificial love to judge all of our actions by. And the bar can only be set so high for us because we have the example of Christ. Without it, the idea that whoever humbles himself would be exalted would not have this explosive meaning, in fact, without Christ’s example it would have no meaning.

It might strike us as curious to have this reading for the Feast of St Thomas. Thomas has, after all, been given to the Church precisely as a preeminent teacher; we are, as Dominicans, in some sense his pupils; and Aeterni Patris speaks of Thomas as reigning supreme (Aeterni Patris, §20). Take a walk along the corridors of the Vatican Museum, and there is St Thomas in glory, his works confounding personifications of errors, who shrink away in terror before the pages of the Summa. We can, of course, make the point that St Thomas, while a preeminent teacher even among the rather exclusive rank of Doctors of the Church, was himself almost absent from his work, never pointing to himself, but always to Christ. There’s nothing autobiographical like there is for St Augustine, and we get no sense of his personality in his work, other than an occasional hint of it, as when he says that parents should not interfere with their children’s desire to live a vowed life. That year of forced confinement at the family home perhaps still fresh in his memory even in Paris in the 1270s.

But we don’t venerate Thomas as a teacher for his invisibility, or because he is an anonymous figure. In fact the picture we get of him from those who knew him in life, is of a man who was probably rather hard to ignore, and certainly a man whose height and girth would have made him less invisible around a priory, than he is on the page. Instead we venerate him because his extraordinary intellectual powers, bestowed upon him as a charismatic gift from God, were so totally given back to God in loving service. We venerate Thomas for his example of servanthood. Thomas, when presented with that image of self-sacrificial love as he knelt before a crucifix in Naples, showed himself to have the mind of Christ. Lord, I want nothing but you. Precisely because he became an obedient servant of the Word, he had been set free, and Thomas’s lesson to us should be precisely that: if you want to be free, learn to serve.

St Thomas’s place in our Dominican family is not on a pedestal. We do not venerate him in such a way that he becomes idolised for his own sake. Rather we should see in his life, as with all the saints, the perfection of Christ’s demanding call of sacrificial love; one who is exalted precisely because he made himself a servant.