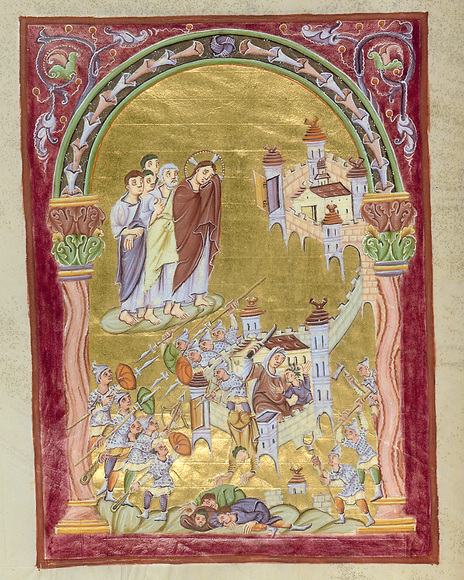 By Br Daniel Benedict Rowlands, O.P | “Sin, even venial sin, is the only real sadness in life, the only enemy of peace, and the only problem tears can dissolve.”  But what then moved our Lord to weep over Jerusalem? To show us the way to a heart that is a true house of prayer.

Only two accounts of our Lord weeping are found in the Gospels: St John records the silent tears he shed over the death of Lazarus, and the other is what we have just heard: St Luke’s report of his weeping over Jerusalem. The Greek distinguishes these latter tears from the former as being loud cries of lamentation. It is rather important that we attend to this vocal cry, loud with content as much as with depth of human emotion –  a content which both explains this striking episode, and also suggests how the Divine Teacher is again leaving us an example to follow.

Our Lord weeps for the city because the people of Jerusalem have failed to recognise “the things that make for peace”. The name Jerusalem means “foundation of peace”. Jewish pilgrims approaching the holy city would sing the psalms of ascent, among which we find these words that we can readily imagine on the lips of Jesus here – “I am for peace, but when I speak, they are for fighting” (Ps. 120:7).  So too would his hearers surely have heard resonances of the Prophet Jeremiah’s laments: “From prophet to priest everyone deals falsely…saying, ‘Peace, peace’, when there is no peace” (Jer. 8:10-11).

At the Saviour’s birth the angels sang, “peace to people of goodwill”, whilst the Risen Lord stood amidst the disciples and greeted them: “Peace be with you”. Yet, the prince of peace paradoxically brings not peace but a sword (Cf. Matt. 10:34). His birth provoked Herod’s murderous rage. Like Absalom, that son of David bearing a name meaning “Father of Peace”, the definitive Son of David suffered death hanging from a tree. Unlike Absalom, he did not rebel against his father but obeyed him perfectly, yet in the course of his Passion alone he elicited all manner of human wickedness: from violence and calumny, to avarice and treachery. Peace is the “tranquillity of order”, and by rejecting their Messiah, Jerusalem rejects the principle of order of the whole cosmos, for Christ “is our peace” (Eph. 2:14).

The Lord’s lamentation bears down on the city with an infinitely more dreadful weight than that of Jeremiah’s because it is divine. In the Incarnate Lord, the omnipotent Godhead is exposed to a single vulnerability: “to be rejected and despised” (Is. 53:3) and Jerusalem has struck at this point, obstructing the will of God, and drawing tears from the Sacred Heart of Jesus. Now, I suggested that an example has been left for us: ought we dare to assume a divine prerogative? “Be imitators of God” (Eph. 5:1), the Apostle bids us. Tears are not only the sign of a merciful judge’s judgement, but also the path to salvation. Immediately before weeping, our Lord had triumphantly entered Jerusalem. He did not disdain the rejoicing multitude; indeed, if it were silent, the very stones would cry out. But he still weeps. As long as we are in the presence of evil, Christian joy is always on the cusp of tears, just as tears of contrition and lament should be ready to become tears of joy. St John Climacus, the great 7th century monk of Sinai, helpfully coined a word for this: Χαρμολύπη (Charmolupē) –  Joy-Grief.

Surely profound compunction of heart –  to the point of tears –  is only for the most egregious of sinners. For the sinner struggling with mediocrity rather than grave depravity, weeping would seem insincere, mere crocodile tears. Surely contrition must be proportionate. One might even say that weeping over sin is a relic of an excessively emotional, medieval piety. Yet, in her wisdom, the Church preserves in the votive orations at the back of the Missal the beautiful collect for the gift of tears:

“Almighty and most gentle God, who brought forth from the rock a fountain of living water for your thirsty people, bring forth we pray, from the hardness of our heart, tears of compunction, that we may lament our sins and merit forgiveness from your mercy.”

Of course, we mustn’t fixate on the outward sign of grace-wrought interior compunction –  it is the invisible tears of the heart that soften it, rendering it, in a renewal of baptism, once again ordered to the divine will, once again at peace. Sin, even venial sin, is the only real sadness in life, the only enemy of peace, and the only problem tears can dissolve. We can go some way to cultivating compunction: regular examination of conscience and confession, devoutly attending to the penitential pleas punctuating the liturgy, and allowing ourselves to be cut to the heart by sacred scripture. But even these weapons can become blunted if we allow them to be reduced to routines. Although we mustn’t worry about an apparent lack of a contrite emotional state, neither should we content ourselves with, for instance, the purely formulaic recitation of an act of contrition. Depth of compunction is in proportion to our love, and not the sin whose presence blinds us to its own presence.

And what’s the most effective means of growing in charity? Exercising it in prayer. In the Gospel, our blessed Lord confirms this pattern. After weeping, Jesus entered the temple and, consumed by zeal, began to drive out the money changers. For love of God, then, let us implore Him for the grace of a perfectly contrite heart, a heart that is a true house of prayer, so that we may prepare a fitting throne from which the king of peace can reign (cf. Col. 3:15).

Image: An illumination of Jesus weeping over Jersualem from the evangelistary of Otto III, produced at Reichenau Abbey, ca.1000 AD (via Wiki Commons). *The Psalm verse in the title is based on the Septuagint/Vulgate rather than the Hebrew; most modern translations follow the Hebrew, which reads “kneel” rather than “weep”.